The Key Numbers for Gold & Silver

The Key Numbers – Let’s start with the 200-day moving average, which usually acts as support (or resistance) for gold and silver.  Gold did not remain below its 200-DMA, at $1,678, for more than a moment and it quickly bounced back.  (As of 5:00 Thursday morning, gold is over $1,700)  But that is not surprising.  Gold has held firm above its 200-DMA for most of this bull market. 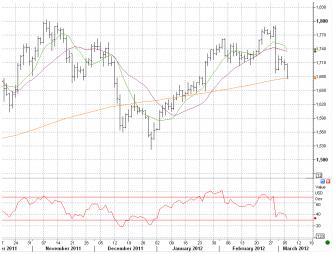 For silver, the key support/resistance number is $34.  Silver was $34.06 early this morning and rising.  We are now back on safer ground, with gold above $1,700 and silver above $34.  Let’s see if they hold through the weekend.  The bull market in gold and silver are not over – the bullion banks (especially JPMorgan) were desperate to cover their huge short positions.  They were scared to death that gold and silver were on the brink of breaking out above $1,800 and $38, which would have propelled their prices much higher.  But after just a few days, prices have turned back up.

It’s always the same drill.  Gold and silver are hit with “waterfall” drops and the fall is fast and furious, but the gains are slow and methodical.  What takes weeks or months to accomplish on the way up is taken away in minutes or days.  But they always come creeping back – at least since the onset of the bull market in 2001.

On another note, let’s take a quick look at Obama and Bernanke’s track record:

In the first two years of their joint reign, Obama and Bernanke have fleeced more wealth from folks on Main Street than the previous 20-years combined.

Food prices have risen every month since June of 2010 and 57% in the first two years of President Obama’s term in office.  Gas prices are up 34% during that same time period.  And cotton has hit a 150-year high, as the price of this essential clothing commodity has soared 210% since Obama’s 2009 inauguration.

In just his first four years in office, Bernanke has been the captain of a reckless and out-of-control money printing press that has drowned America in more “new cash” than was created during the entire 26-year period from 1959-1985.

One out of every seven families today in America — the greatest country the world has ever seen — is living below the poverty line and making a combined household income below $21,954. That’s as devastating as Carter’s worst year in 1980.

Judging by the facts, we aren’t just about to fall into a 1970s-meltdown . . . we are already knee deep in one.

A brief heads up.

I needed to source some Gold last week for a longtime client and called Andy Schectman at Miles Franklin.  I mentioned my concerns about the potential for confiscation like the 1930’s and how it might be preferable to own “foreign coins” rather than Eagles.  Andy mentioned Canadian storage but as this was not a huge purchase and the client wanted delivery, this option was out.  But here is where it got very VERY interesting.  Andy told me that in his 22 years as a dealer (and prior to my knowledge), St. Gaudens $20 Gold pieces always traded at a premium over spot.  They actually traded as high as a 60% premium 10 or so years back.  These premiums were for “fine” coins, not MS 61,62 or higher, those were higher.

Now, here is the cool part, you can buy 1 oz. St. Gaudens coins for virtually the exact same price as Gold Eagles or Maples right now!  That’s right, the premium has basically evaporated to 3 or 4% over spot, which is exactly where Eagles are trading!  So here it is, you can purchase “numismatic” coins that are pre 1933 that theoretically should be immune from any confiscation.  You are basically paying for the Gold and Gold alone but getting a coin that obviously has some “rarity” associated with it AND may not be part of any confiscation.  This “non confiscation” cannot be guaranteed of course but it is one further step that you can take if confiscation is a concern (it is to me).  Consider this an “arbitrage” that currently exists today and may not in a few weeks.  I have never ever touted a coin dealer before, but because Andy pointed me to something that is/was  relatively unknown (to me anyway) and certainly an opportunity with upside premium potential and only “Gold price” downside potential, he may be contacted at  www.milesfranklin.com  .

This is something that could (should?) be considered for trading in Eagles, Maples, Krugs or whatever.  For a very nominal amount you can move your metal up the totem pole and possibly avoid confiscation if it were to come.  Of course it is possible that any confiscation could even include your “Gold filling” so don’t howl at me if numismatics get included.  I just think that this type of move is worth the effort even if the spread were to move to 5% or even10%, consider it “insurance on your insurance”.

For the most up to the minute pricing please call our experienced brokers at 800-822-8080 or call your Miles Franklin broker directly.