In recent years, the vast majority of Western denizens have been so worn down by economic failure and so dumbed down by socialism the will to reason has been irreparably damaged.  Sadly, even the impetus to try has been disabled; subsequently, fostering a “bread and circuses” culture where intellectual thought – let alone, common sense – has on a widespread basis been all but eradicated.  True, most aren’t even paying attention to propaganda of “recovery”; as frankly, their decaying lives are not impacted in the slightest.  However, the fact that the few that are cognizant don’t speak critically of – or even question – the lies is what terrifies us most, as we become a “bread and circuses” society that hopefully, doesn’t morph into something vastly more sinister.

I mean, how can anyone believe the propaganda of Ukrainian “peace treaties” whilst aggressive warfare is ongoing both militarily and economically?  Or administration guarantees of “no boots on the ground” as it sends hundreds of “advisors” to Iraq and Syria?  Or the “brilliance” of hedge fund managers when institutions are dropping them like hot potatoes?  Or economic “recovery,” when even Goldman Sachs’ indicators are flashing global recession – and Caterpillar, the world’s largest industrial equipment manufacturer, posts its 21st straight quarter of declining revenues?

As for the grossly disfigured economic landscape caused by 43 years of unfettered money printing and a decade of pervasive market manipulation, it’s hard to believe the Wall Street I once loved, and Main Street I grew up with are so far gone.  Watching an equity bubble much larger than 2007, and even 2000, amidst the world’s worst economic outlook in generations is scary enough.  However, what’s even scarier is it’s been created entirely for the benefit of the “1%,” with as near record low public participation.  To wit, in 1999 everyone owned an internet stock or two; while today, CNBC’s ratings are nearly at all-time lows and most people have not a clue where the Dow is trading – or even the NASDAQ, despite Friday’s largest-ever IPO scam, Ali Baba.

Yes, Ali Baba is now the 12th largest company in the S&P 500 – spun by Wall Street criminals as the Chinese equivalent of Amazon, eBay and Google combined with limitless growth prospects and otherworldly profit margins.  That is unless one possesses a second degree economics understanding, with which they’d realize Ali Baba’s “margins” are but another figment of Chinese book cooking.  Consequently, on a day when the CRB commodity index plunged to nearly two year lows, and global currencies accelerated their dangerous downward spike, Ali Baba’s IPO was so popular it shattered Twitter’s first day volume record – in 20 minutes.

Who was buying all this stock, you ask?  Well, now that we know a “cluster of Central banks” owns half the world’s equity capitalization, we’ll let you take a wild guess.  And by the way, the leverage in which said stock is owned – care of ZIRP, and in some cases NIRP “to infinity” – is so off the charts, it makes Lehman era levels pale in comparison.  Ironically, Ali Baba’s IPO coincided with yet another hollow Greenspan-esque warning of market “excess” – in this case, by Dallas Fed President Richard Fisher, in true “Cassandra”-like fashion.  Like Greenspan, Fisher will continue to do the opposite of what he says, but maintain he was “on the record” of predicting the inevitable crash – which mathematically, must eventually occur.

Simultaneously Friday, the Cartel entered the final stages of what could only be deemed financial suicide, in taking paper silver to a new four-year low at the same 10:00 AM EST “key attack time” they have utilized for the past 15 years; i.e., the second global physical markets close.  In a matter of minutes, silver was taken down a whopping $0.60/ounce, followed by a similar “Sunday night sentiment” attack of $0.60/ounce whilst the physical world slept.  And by the way, do you know how much silver clients sold back to Miles Franklin during that time – i.e., one of the nation’s oldest largest bullion dealers?  That’s right, ZERO.  The same amount as always, as essentially no one ever sells us metal, year in and year out.

By now, essentially all the world’s smart money – most importantly, Eastern hemisphere sovereign wealth funds – are patently aware that what occurs on the COMEX each day, and at 2:15 AM EST on the LBMA is pure, unadulterated fraud.  At this point, we don’t believe any material inventories exist on these exchanges – nor the equally tainted GLD and SLV ETFs, whose contents like Fort Knox, have never been audited and never will be.  Heck, the Cartel even had the gall to stop publishing GOFO or gold (and silver) forward rates as of today – as if anyone actually believed legitimate trading at near zero interest rates ever really occurred.

In pushing prices this far below the cost of production, amidst record physical demand and unprecedented bullish fundamentals, the Cartel may have succeeded in getting the MSM to write soon-to-be-infamous headlines like this weekend’s Marketwatch gem, “Gold crashes, and is now tarnished for good.”  However, the damage to their cause of maintaining a world-destroying status quo far exceeds such petty benefits – as PM production is now set to drop far more precipitously then even we could imagine.  In silver, the Cartel’s predicament is particularly dire, as not only are primary silver mines depleting at a record pace but global zinc and lead mines – where the majority of silver is mined – are as well.  Thus, my forecast of an additional 20%-25% silver production decline in the next 3-4 years has never been more staunch; and potentially, too liberal. 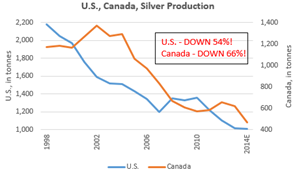 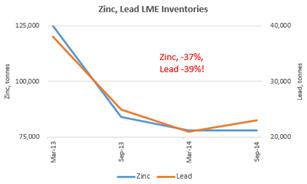 Everything we write about silver could be similarly concluded for gold.  However, in silver’s case, the supply/demand balance is significantly tighter.  We have already written of how Shanghai silver inventories have plunged 91% in the past 17 months – since the April 2013 “alternative currencies destruction” raids – whilst even fraudulent COMEX inventories amount to barely $1 billion, with a whopping $15 billion of open interest in the December silver contract alone.  And following last week’s opening of the Shanghai “international board” – trading only in contracts to be physically delivered with an explicit “mission statement” of taking the mantle of price discovery from the West – it’s only a matter of time before the next major metal shortage.  Don’t forget, the silver industry largely sold out in 2008 and 2011, and to a lesser extent in 2013, so it’s already on a razor’s edge.  This time around, we expect the next shortage to be far longer lasting and potentially lethal to the Cartel.  In fact, the only difference between 2008 and today that we see is that whilst the global economy was collapsing then, and the Cartel attacking paper PM prices to prevent them from being viewed as safe havens, the global economy is collapsing significantly more so today – with stock prices supported as vehemently as paper PM prices suppressed.  Thus, it would not surprise us one bit if a 2008-style physical silver panic breaks out amidst record stock prices – or alternatively, collapsing equities if TPTB can’t control the Frankenstein monster they’ve created. 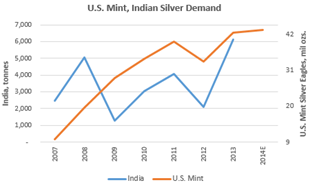 To conclude, last week’s paper raiding of silver’s multi-year lows – amidst, by the way, a decidedly unsuccessful bid to break gold’s lows – rings more of Cartel suicide than effectiveness.  Not only are prices 30%-50% below silver’s cost of production – in a market where supply is already on the verge of collapse – but paper prices have been taken below the extremely oversold levels immediately following April 2013’s “alternative currencies destruction” mega-raids.

With so many potential catalysts lurking about it doesn’t take much “analysis” to predict the bottom is nigh; nor, equally importantly, that the inevitable Cartel-destroying supply shortage could emerge on any given day.  In other words, why anyone wouldn’t “back up the truck” at such comical prices is beyond us.