As expected, Whirlybird Janet’s congressional testimony yesterday gibed exactly with what the Fed has said since last month’s FOMC meeting.  Also as (we at the Miles Franklin Blog) expected, she made a mockery of the concept of Fed “omniscience.”  To wit, recall the Fed’s utterly miserable track record of economic forecasting – always on the high side, in large part due to its own, horribly destructive policies.  In “Yellen’s Last Stand” – following the aforementioned, June 18th meeting – we discussed the reduction of the Fed’s 2014 GDP growth estimate from 2.9% to 2.2%, and posted this ugly, self-explanatory chart of similar failure from the entire Wall Street institution, over the past decade.  And just think, what it all-time low GDP “deflators” weren’t used! 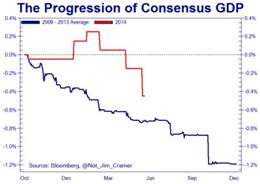 Following yesterday’s testimony, in which Yellen espoused “confidence” in economic growth – while caveating every point in a pitiful effort to hedge future failures – none other than the vampire squid itself, Goldman Sachs, claimed her Q&A answers were slightly more “hawkish” in tone.  Pure gibberish, as the best propaganda Goldman could proffer was that two of the nine FOMC members expect the first rate hike in 2015, versus three last month.  LOL.  And lest anyone believes Goldman has any remaining credibility, please read yesterday’s article, “the absolute peak of lunacy,” of how they “value” the stock market.

Better yet, even Zero Hedge was miserably off point in citing Yellen’s “irrational exuberance moment,” after she comically referred to overvaluation of social media and biotech stocks, whilst claiming the rest of the equity market, as well as corporate bonds and real estate, retain valuations “within historical norms.”  Think about the chutzpah of Yellen making such statements are, given her purely academic background with utterly ZERO practical market experience.  Not to mention, the fact that she has been given unchallengeable power to manipulate security valuations from her ivory tower.

And as for the objectively overvalued levels of said markets – in most cases, of historic proportions – I guess we’ll just have to wait and see if Whirlybird Janet’s market prowess is as “accomplished” as Helicopter Ben and Maestro Greenspan before her.  And by the way, following said “irrational exuberance moment,” the (PPT-supported) equity markets were essentially unchanged, led by the “Dow Jones Propaganda Average’s” late day “hail mary” to turn slightly green, whilst the volatility index held near its all-time low, and Treasury yields declined.

Even MSM cheerleader supreme Yahoo! Finance’s top story was titled “Is focusing on the Fed foolish?”; as at some point, a track record of unprecedented failure must be addressed.  To that end, such universal recognition is as certain as that of the Cartel’s unabashed PM price suppression – as following Monday’s “mystery” dumping of $1.3 billion of gold futures at the COMEX open, another “mystery” seller, this time of $2.3 billion of unbacked paper, showed up nearly an hour after Whirlybird Janet’s testimony, just as prices were on the verge of taking off.  Fortunately, both metals’ 50 and 200 day moving averages held like champs, and after several blatant attempts to cap gold at the round number of $1,300, prices are rising anew this morning. 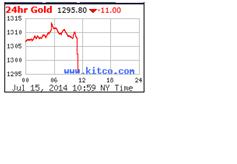 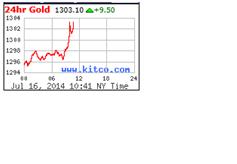 The most comical part of Wall Street led “taper watching,” aside from the fact that the majority of QE activity is likely done covertly, is that such policy stems solely from the Fed’s desire to stabilize financial markets – and thus, enrich the “1%.”  In other words, it has nothing to do with the “economy” whatsoever, and never has.  In fact, the only “economic” basis of monetary policy in the terminal phase of a collapsing fiat Ponzi scheme is mainlining “ZIRP to infinity.”  Mathematically, neither the Federal government, municipalities, corporations, individuals, nor the Fed itself can tolerate even the slightest increase in interest rates.  And thus, rest assured, the Fed’s current “2015” and/or “2016” goalposts for raising rates will continue to advance, ad infinitum.

As for said economic “growth,” we don’t see any outside the “island of lies” where fraudulent jobs data and “diffusion indices” are rife.  In fact, not only does John Williams of Shadowstats expect the first quarter’s 3% GDP contraction to be followed by an “unexpected” second quarter contraction – as usual, following multiple downward revisions – but even Wall Street is dramatically ratcheting down its growth expectations, expecting just 2% corporate revenue growth in the second half of the year.  And per the “progression of consensus GDP” chart at the top of this article, downward estimate revisions tend to accelerate as the year moves on.  Thus, we look forward, with “baited breath,” to the initial 2Q GDP report on July 30th – which comically, Wall Street forecasts at +3%; but even more so, the final GDP figure on September 26th, and the 3Q and 4Q results later this year.  And by the way, we find it not just a tad “coincidental” that July 30th is also the day of the next FOMC meeting.

As for the title of today’s article, it encapsulates the Fed’s idiocy in the two key words espoused yesterday, when Whirlybird Janet was asked of the likelihood that the Fed’s aforementioned, downwardly revised economic projections are achieved.  For all the blather and bluster of said Fed “omniscience,” Yellen noted “considerable uncertainty” in the 2014 economic outlook, irrespective of the recent strength of said “diffusion indices.”  In other words, as always, the Fed has not a clue what’s coming.

Perhaps she saw today’s economic data coming, in which the PPI came in higher than expected; mortgage purchase applications plunged another 8%, to nearly 20-year lows; industrial production number came in at a pathetic +0.2%, compared to expectations three times that amount; and industrial manufacturing at an even more meek +0.1%, compared to expectations four times that level.  And thus, we present our updated table of real economic data, and ask you to determine where Wall Street’s +3% estimate of 2Q GDP growth emanates from! 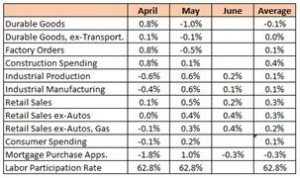 Better yet, have a gander at the below comparison of “GDP growth” and PMI manufacturing “diffusion indices” in the U.S., France, and China.  As you can see, both data sets are essentially worthless, with utterly zero correlation between not only the various countries, but the actual data.  I mean, how did the U.S. post the highest PMI in the first quarter (at “55.4,” signifying strong expansion), yet its GDP growth was not only the lowest, but strongly negative?  Conversely, China’s PMI data was the weakest (at “48.7,” signifying contraction), yet its GDP growth was not only the highest, but in the stratosphere!

Moreover, if you look at the eerie similarity of the second quarter data – as “validated” by today’s 7.5% Chinese “GDP growth” reading – you’re probably wondering how on Earth Wall Street is forecasting 3% U.S. GDP growth, right?  In fact, said estimate is so much of an outlier, it calls to question the entire Wall Street “analytical process.”  As if that’s anything new, from an industry that didn’t see – and conversely, vociferously cheered on – the 1929, 1999, and 2007 bubbles. 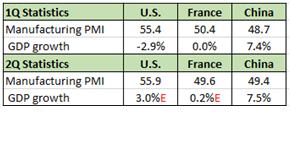 Hopefully, this real analysis convinces you of the “considerable uncertainty” ahead; which fortunately, can be countered with ownership of physical precious metals – trading, unbelievably, well below their respective costs of production!