As the end of a long, grueling week approaches – featuring the aptly forecasted “three days of terror” – I need to take my foot off the gas for a few hours; at least until I commence today’s afternoon wrap-up.  Thus, I couldn’t think of a better time to write about one of my favorite topics – my beautiful dog, Giselle.

My wife Diana was a professional ballet dancer, and today teaches at two of Colorado’s most prestigious dance academies.  Consequently, I have been exposed to more ballet than 99% of all men – and likely, 95% of women as well.  Giselle is one of the most famous classic ballets, so it was a no-brainer to name our pup after its main character.

Prior to Giselle, I had never been a “dog person.”  To the contrary, I found them irritating, noisy, and messy; instead, preferring the quiet, low-maintenance solitude of cats.  However, when we moved to Colorado, Diana insisted on getting a dog, as she has already found two best friends in the past – a Yorkie named Taffy, and a Dachsund named Ian.  After doing some research, we chose a rescue group based in California, ultimately settling on another Yorkie.  Thus, we were quite surprised when the dog we received was the WRONG ONE.  Giselle – named “Cammie” by the rescue shelter – may have some Yorkie in her, but the wrong dog was put on the truck.  Incidentally, we still don’t know what type of mix she is, with the most likely breeds being Yorkie, Silky, Westie, and Maltese.

The night of the pickup, Diana had to work, so I drove alone to a 7-11 near downtown Denver; where the truck – driven by volunteers – held several cages of barking dogs.  Giselle was traumatized by the ride, and quite mangy given the shoddy treatment – and lack of a substantial diet – she received at the puppy mill.  Our vet estimated her to be 18 months old at the time (Fall 2007), but she had already lived in captivity in a (Missouri) puppy mill, been rescued to California, and driven to Colorado, where I first saw her sweet, gentle (always hungry) face.

Over the past five years, I have grown to love Giselle with the strength of my life’s greatest passions; and each time I see her, I think of “ALL THAT’S GOOD” in the world.  I know she won’t live forever – but then again, neither will I.  Giselle has already infused my life – and Diana’s – with decades worth of peace and joy – and in the process, converted me whole-heartedly to an unabashed dog lover.

Thus, whenever I’m having a bad day – or withstanding a Cartel attack – I simply walk up to my pup, and give her a hug. 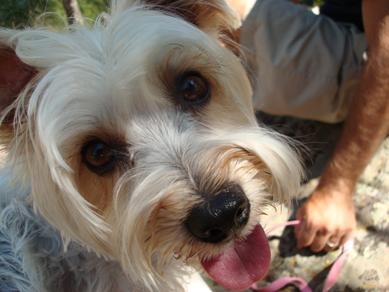 Call Miles Franklin at 800-822-8080, and talk to one of our brokers.  Through industry-leading customer service and competitive pricing, we aim to EARN your business.