Chairman Bernocchio spoke yesterday and said what we knew all along…MORE QE, MORE printing and “we were just kidding about tapering” because the economy just isn’t that strong.  Really?  What was your first clue?  The Fed has become a laughing stock of the world as different governors are trotted out who contradict each other on a daily basis.  Tapering or no tapering, beginning this year, not beginning until at least 2015 blah blah blah.  They have already lost control of the markets that they so dearly want locked down.  Volatility has exploded and will go terminal.

It looks like the “plan” to extricate the U.S. banks from their poisonous short positions in gold futures was a winner.  U.S. banks have gone from 106,000 net short contracts to 45,000 net long.  This “long” position was created by duping the “specs” into going short a record 130,000 gross shorts.  Look at this chart below for a moment, the last 3-4 months is when the spike in “paper shorts” took place. 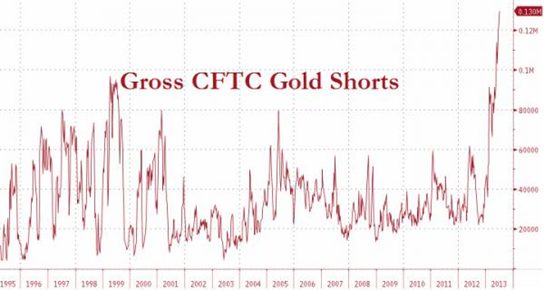 Source: CFTC CEI Gold Non-Commercial Short Contracts/Combined, CMXOGNCS
They were selling gold that they do not (nor ever will) have.  Now as my title implies “here we go”…because these positions represent locked in and guaranteed buying to cover.  THIS is not “potential” buying power, no, this IS buying power.  Yes I know, it is only in the “paper markets” but now the physical market will no longer have the headwind of manipulation to fight, the “manipulation” will be the first tailwind the gold market has had in over 15 years!

Of course this “tailwind” from the paper short covering positions will coincide with the physical demand that it created in the first place.  The backwardation in London is now in day 4, the previous two occasions, 1999 (Washington Agreement) and 2008 (Lehman systemic flush) only lasted 2 days each time.  I mention this because back in 1999 and 2008 there WAS “official” metal that was still available to “release” into the marketplace, I suspect that this is no longer true.  I believe this is no longer true because the banks have switched from short to long because they “somehow” know or were “told” that the bottom of the barrel was within sight.

I do also want to mention that with the physical shortages that now exist, owners of far out futures will be induced into selling those futures and moving up to the current spot month or even the cash market itself.  Fear of not receiving delivery will inspire this action which will be self-feeding and fulfilling.  Nothing creates a shortage better than a shortage.  I know, it sounds funny but when you are told that you may not or cannot have something…you want it all the more…AND you want it now!  I suspect that the current backwardation will not be a short term event and the negative basis has much further to go before this is all over.

It took 3 months for gold and silver to be “collapsed” so that the banks could reposition themselves, as I mentioned this happened with, and created more, HUGE global physical demand.  Now, we will see not only physical demand but also paper demand which will compete with each other.  I will be shocked if it takes more than 3 months to recoup all…and then some.  It looks to me like the “tapering talk” was merely a Trojan horse used to help the banks extricate themselves from their shorts, it worked!

No matter what Bernocchio Ben has to say in his waning months as Fed Chairman. Please understand that interest rates have already risen nearly 80% from their lows and oil is now $15 per barrel higher than they were 6 months ago.  These will act as headwinds or taxes to the real economy, the Fed MUST continue to print, they MUST continue to purchase Treasury bonds and they MUST continue at full speed debauching the currency.  ALL of this is good for gold and silver, only now the banks will make money when gold and silver increase in price.  Nothing has changed.  The fundamentals that were “in place” 3 months ago are still there, the only thing that has changed is that the banks are now, finally after more than 15 years…LONG and will benefit from higher prices!

It had to happen sooner or later; the “bottom of the physical barrel” had to be reached.  It looks like this has finally happened.  But, lo and behold the banks will benefit…what are the odds of this happening?  The “markup” phase that I have spoken of so often is now fueled and ready on the launch pad, Ben just pushed the button.  The price movement will shock many (most) and the amount of time for this to happen will be contracted…to allow as few as possible either in or back in.  Get ready because “here we go!”