All I can say is this.  Yesterday afternoon’s “Miles Franklin All-Star Silver Panel Webinar” was an unmitigated success.  Direct questions regarding silver supply, demand, mining costs, inventories, and trading with David Morgan, Harvey Organ, Steve St. Angelo, and Bill Holter enabled listeners to derive a significantly better understanding of how tight the market is – and will likely be – in the coming years.  Thus, we courage that you will listen to it on the Miles Franklin Blog – and send it to as many people as possible, the world round.

Yes, supply is tight – and likely, will be a lot more so in the coming years, based on surging investment and industrial demand and the inevitable production collapse if prices don’t rise materially – for both silver and the base metals that produce silver as by-product.  And as for demand, whilst TPTB commit “Cartel Suicide” by pushing prices well below the cost of production, it has never been stronger – worldwide.  As you can see below, not only are U.S. and Royal Canadian Mint silver sales and Indian silver imports on pace to either meet or exceed 2013’s record levels, but the U.S. Mint is on pace to deliver its third biggest sales month ever – and equally importantly, its largest non-January month, as January is typically the biggest sales month due to late year backordering of the coming year’s issuance.  And since, per what we validated on the Webinar, worldwide supplies are so tortuously thin, the odds of a physical short squeeze have never been higher – particularly given the terrifying political, economic and financial environment. 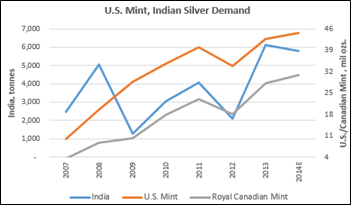 Speaking of said environment, how bad can it get?  On essentially any metric, qualitative or quantitative, the world is in far worse economic shape than the 2008 bottom – with, until this month, one “temporary” exception; i.e., the ability of various “PPT operatives” to support equities with unfettered money printing and market manipulation.  Given this month’s horrific market declines – of not only stocks but bond yields, commodities, and currencies – we are clearly entering an extreme “danger zone,” in which the “big one” could break out in full catastrophic form, any day.  Europe is an unmitigated disaster – with the PIIGS crisis back in full bloom; the Bank of Japan has been forced to admit relentless Nikkei stock purchases, as Abenomics has been proven to be an unmitigated failure; China’s historic construction bubble has been exposed by collapsing commodity prices; and America’s economic data is plummeting despite TPTB’s best “tape painting” efforts, ahead of next month’s midterm elections.  And of course, even the vaunted PPT is having difficulty supporting markets that appear to have not only made an “Ali Baba top,” but desperately want to plunge to the realm of “valuation reality” at far, far lower levels.

Of course, they’ll continue fighting this inevitability to the bitter end – which is why day after day, all precious metal surges are fought tooth and nail with relentless “Cartel Herald” algorithms such as yesterdays at the 8:20 AM EST COMEX open, the 12:00 PM EST “cap of last resort “and of course, this morning’s 2:15 AM EST open of the London paper “pre-market” session.

Then you have the Cartel’s oldest trick, the DLITG or “Don’t Let it Turn Green” algorithm utilized to keep the most widely watched paper PM proxies – the GLD and SLV ETFs – from flashing bullish signals.  Here’s a perfect example of it yesterday, replete with $0.05/oz. attack in the trading day’s final minute; and of course, the daily “dead ringer” algorithm utilized to prop the “Dow Jones Propaganda Average.”  Never forget that 10:00 AM EST not only represents the Cartel’s “key attack time #1” because it’s when global physical PM markets close, but the PPT’s “key goosing time” because it’s when the Fed executes its daily POMO or “Permanent Open Market Operations.”

As for U.S. Treasuries, never in history has volatility been so high, as due to a combination of investor fear, high frequency algorithms’ destruction of market dynamics, and relentless Federal Reserve manipulation yields are literally all over the place – as I write at 8:20 AM EST, at 2.16%, en route to ZERO when the Fed initiates an Abenomics-like “QE to Infinity” program – and eventually, INFINITY when said program inevitably catalyzes hyperinflation.  And per today’s article title, the Fed is already telegraphing this with accelerated “jawboning” as the market convulsions expand; along, of course, with accelerated prayer behind the Eccles Building’s closed doors.  Investors’ calls for QE4 are already growing louder – ironically, just two weeks before the Fed is scheduled to end QE3 – to the point that laughably, the MSM is citing Whirlybird Janet’s speech this morning at the “Conference on Inequality of Economic Opportunity” as a potentially “bullish catalyst.”

Thus, as the “ides of October” build to a crescendo, expect nothing less than unprecedented doses of “manipulation, jawboning and prayer” – particularly as relates to the physical gold and silver markets, which likely sooner rather than later will expose the “financial world’s Achilles Heel” by exploding higher.