Proof of the Tapering Mirage

After 12 years of living and breathing Precious Metals, even I can be shocked by the criminality of the “financial Nazis” manipulating – and many cases, destroying – billions of lives.  Sadly, the damage is only beginning; as the issues that caused the 2008 crisis have since been catastrophically compounded.  Worldwide debt, unemployment, and inflation are dramatically higher; whilst economic growth is substantially lower, and derivatives more prevalent.  Regarding the latter, even the CFTC admitted this week that its estimate of the swaps market is likely understated by $55 trillion.

Consequently, global money printing has never been more rampant; led by the Federal Reserve, which has exported so much inflation, the average global currency has declined by 20% in the past two years alone.  Not un-coincidentally, this is when the Fed commenced “Operation Twist”; i.e., purchasing long-term Treasury securities – and subsequently, QE3 and QE4.  Consequently, PHYSICAL gold and silver demand has surged to historic highs – led by China, which this year alone will either mine or import more than half of all global production.  Even the U.S. Mint shattered its annual sales record for Silver Eagles; yet, we’re to believe “freely-traded” gold and silver markets are reflecting the same type of fear as Lehman Brothers shares in the summer of 2008.

Since early 2012 as signified by the February 29th “Leap Day Violation,” when gold was attacked during innocuous Bernanke testimony before Congress, essentially all Federal Reserve comments have been followed by Precious Metal attacks.  And not just live ones; mind you but the minutes of month-old meetings.  Case in point, Wednesday’s FOMC statement; which in my view, was far more dovish than anticipated, given removal of the 6.5% unemployment rate “line in the sand” previously earmarked as signaling the end of zero bound rates.

To wit, the Fed now intends to keep rates “exceptionally low” until “well after the jobless rate falls below 6.5%”; in my view, signaling “ZIRP to Infinity.”  I mean, think about it.  The new FOMC consensus for the Fed Funds rate is that it will end by 2016 – i.e., three years from now – at 1.7%, or 67% above its six-decade average of 5.2%.  In fact, when “Maestro” Greenspan pushed Fed Funds below 1.7% following the “tech wreck” he created, it was the first time it was this low since 1961.  And thus, given that we are supposedly amidst a rip-roaring “recovery,” what does it suggest when the Fed says rates will remain this low for at least three more years?

The market initially agreed with this dovish interpretation; with PMs rising and holding their (capped) gains until miraculously, just as Bernanke’s press conference concluded, gold and silver prices plunged.  Quite objectively, his comments strongly validated the dovish language in the published comments; but in true Cartel form, PMs were attacked as he spoke – followed by the 138th visit from the 2:15 AM algorithm in the past 152 trading days.  Better yet, following utterly miserable economic data Thursday morning – including surging jobless claims, a collapsing capital spending outlook and the first year-over-year decline in existing home sales in 29 months, gold prices suddenly plummeted below $1,200/ounce, and silver to barely above $19/ounce.

Yesterday, dictionary.com dubbed privacy to be its word of the year.  However, it could just as easily have been tapering, given how much attention – and misrepresentation – it has received.  Frankly, it’s no different than its 2010 counterpart – i.e., the Fed’s supposed “exit strategy”; or, for that matter, Bennie’s hallucinatory 2009 “green shoots of recovery.”  Even if the Fed does in fact “taper” its $85 billion/month of overt debt monetization by a measly $10 billion, it will still be printing at an historic rate of $900 billion per year, yielding the same net effect.  Coupling such printing with the aforementioned “ZIRP to Infinity”; and frankly, it’s difficult to see what exactly the hype is all about.

Moreover, whether the Fed prints $50 billion, $75 billion, or $100 billion each month, massive inflation will be exported around the world.  To wit, after a brief reprieve this autumn – following massive foreign exchange intervention – many foreign currencies are again in freefall mode.  To wit, Thursday’s FOMC announcement, irrespective of one’s interpretation, catalyzed additional, massive currency declines; as not only did the Yen plunge to multi-year lows, but the “Fragile Five” currencies started to collapse anew – such as the Brazilian Real, forcing the Brazilian government to yet again intervene.  Way to go, Bennie!  Lucky for you, you’ll be out of office when the real carnage from your policies is witnessed.

That said the point of this article is to not only demonstrate that the Fed is incompetent, but flat out lying regarding the amount of QE they purport.  The math is quite simple; but sadly, few bother to do it.  That is why the Miles Franklin Blog is here; to shine the light of truth on a helplessly corrupt financial world, which for the time being has all but abandoned it.

Make no mistake what we are witnessing is the desperate attempt of the U.S. government to maintain a dying status quo; nothing more, nothing less.  The concept of “new age” economics is as fallacious as the “new normal” of the late 1990s internet boom; whilst today’s stock market “boom” has as little reality attached to it as the Dow in September 1929 – when Irving Fisher infamously predicted stocks had reached a “permanently high plateau.”  Moreover, “traders” are no smarter today than in either of those two fateful periods; only this time around, they can simply observe what the government is doing via open market operations; quantitative easing; and – of course – blatantly transparent gold Cartel activity.  Fortunately, as discussed in my Elijah Johnson podcast yesterday, the forces of reality are indeed powerful; particularly those in the Physical PM markets, where a locomotive of plunging supply and exploding demand is heading toward the world at a breakneck pace.  Combined with the real impact of exported inflation wreaking havoc on overseas economies and the recipe for catastrophic economic collapse are quite apparent. 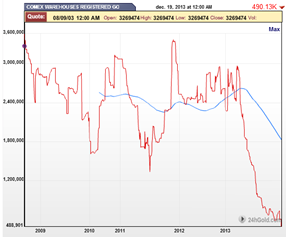 Back to the aforementioned PROOF that Wednesday’s “tapering” announcement is as meaningless as shredded hay, consider what Bill Holter wrote this morning…

Of course one could ask silly questions like “how do we know that $85 billion was the “real” original amount in the first place?  Or, how do we know that this $10 billion so called taper doesn’t sneak in the back door along with another $20 billion extra for good measure.  The answer of course is “we don’t, I guess we’ll just have to trust them.”  Sort of like the $15 trillion (with a “T”)  extra in loans (the majority to overseas banks) that the Fed lent out in 2008 and ’09…that we didn’t know about until 2 years or more after the fact.

In other words, why would anyone believe a word the Fed says, in light of both its actions and words; in the latter case, as discussed in Thursday’s “Communications Breakdown?”  The answer, of course, is they don’t – and never will.  Fortunately, one needs not speculate as to what they’re doing, but simply do the math.  To wit, a table I received Thursday from “Reader W,” depicting the change in the Fed’s published balance sheet this year.  In other words, since the end of 2012, it has not increased at the stated rate of $85 billion per month; but instead, $94 billion per month.  Thus, the Wednesday’s so-called “taper” announcement was but a ruse – as essentially the entire $120 billion of annualized “savings” was spent this year.  Again, not even by accounting chicanery.  Plain and simple, the Fed lied about the level of 2013 QE; and left the evidence right there in the open, for “those that would see.”

However, that’s not the half of it; as I can prove this pace actually accelerated in the second half of the year, to nearly $130 billion per month.  And the reason this was necessitated, you ask?  Easy, Bennie’s moronic, ill-advised decision to hint at the potential of tapering around mid-year.  Here’s how…

Unfortunately, the giant pink elephant in the room has been entirely ignored.  That is, the massive losses incurred by the Fed’s portfolio as a result of rising interest rates.  To wit, from May 2nd through December 18th, the 10-year yield nearly doubled, from 1.63% to 2.94%.  Consequently, the above calculations heavily understate the actual level of QE; which, in order to maintain the aforementioned $4.0 trillion balance sheet total, had to be increased by a whopping $329 billion to offset an estimated 9% capital loss.

Per the below table of the Fed’s Treasury holdings, I made a rough calculation of the duration of the Fed’s bond portfolio.  To do so, I had to assume its mortgage-backed bond portfolio had a similar “maturity makeup.”  However, if anything, it was probably longer – as I highly doubt short-term, mortgage-backed “bills” even exist.  Using a simple weighted average, the Fed’s average bond maturity is 10.5 years; which I’ll approximate to be its overall portfolio duration, as the actual calculation is quite a bit more complex.  As discussed in April’s “Duration Trap,” this is quite a scary development; as when the Fed started “QEing” in 2008, its average duration was just 2.5 years.

Next, I calculated the return of the Treasury ETFs “IEF” and “TLT.”  IEF holds Treasuries with an average maturity of 7-10 years, while TLT’s average maturity is “20+” years.  Thus, as the Treasuries’ weighted average maturity is 10.5 years, I assumed the Fed’s losses were much closer to IEF’s 7.5% decline from May 2nd through December 18th than TLT’s 15.0%.  There is no way of getting it exactly right, but I believe it’s safe to assume a roughly 9% capital loss in the Fed’s portfolio over this period.  Moreover, to guesstimate the dollar value of these losses, I utilized the midpoint of the Fed’s stated portfolio value over this period, or $3.66 trillion as its “base level”; which, when multiplied by 9% yields an estimated capital loss of $329 billion.  And thus, does it surprise anyone that Warren Buffett deemed the Fed “the world’s largest hedge fund?”

Quite obviously, the “Fed balance sheet” chart above completely ignores these losses; and thus, they must be added to the “exactly $85 billion per month” figure submitted for public consumption.  Again, the period involved was 7.53 months; so dividing $329 billion by 7.53 yields an increased monthly QE level of an astounding $44 billion.  In other words, while the Fed purports to have spent $85 billion per month, it actually spent closer to $85 + $44 = $129 billion per month over this period.  Moreover, if rates continue rising, which they most likely will now that the Chinese have stated their intention to stop accumulating foreign currency reserves, the new QE target of $75 billion will likely prove equally, woefully low.  Just look at this morning’s suspicious trading of the 10-year Treasury yield (below); as for the second straight day, a seemingly “magic” force emerged at the NYSE open to push rates down from the very, very key round number of 3.0% – above which, you can bet a veritable avalanche of “stop loss” sell orders are sitting.  In other words, the exact same manipulative, government algorithms utilized to prevent gold and silver from trading above “key technical levels.”

Let’s face it.  Government market manipulation has been taken to new levels of blatancy; which sadly, very few care about despite more than 99% of the global population being negatively impacted by it.  Fortunately, actions always have consequences; in this case, via the massive inflation such parabolic money printing is exporting worldwide – not to mention, the rapid drain of physical gold and silver from West to East, which at some point soon will be understood by all.

What we are witnessing today is the final death throes of history’s most hideous, destructive fiat currency regime; not to mention, the American empire itself.  Economic and market volatility will only grow exponentially worse in the coming months and years; which is exactly why one needs to hold the only assets guaranteed to maintain their purchasing power when all is said and done.  Particularly given the tax-related end of year selling of PAPER gold and silver accompanying this farcical “post-taper” Cartel attack, one may never see a better opportunity to protect their assets.