The Point Of No Return

In last month’s “Place Your Bets – Economic Mother Nature versus Wall Street,” we presented the below chart, depicting how dramatically the U.S. economic situation has deteriorated since the 2000 and 2007 financial calamities.  Amazingly, it has taken just 14 years for America to look more like a third world nation than a “superpower;” and sadly, the trend is decidedly not its friend.

Unquestionably, the global economy “broke” during 2008’s Global Meltdown I, as 37 years of unfettered, global money printing finally came home to roost.  However it wasn’t until 2011’s Global Meltdown II that TPTB realized their post-2008 money printing party was decidedly failing, prompting it to launch history’s most aggressive market manipulation campaign.  In a classic “Fargo Moment,” the world’s Central bankers decided that deception, lies and all-out fraud were the only available alternative to instantaneous global collapse; and consequently, the ensuing economic, financial and market distortions have put the entire world on the precipice of cataclysm.  In other words, the “point of no return” was passed – in which truth was permanently eschewed – dramatically accelerating the time line of the eventual end game, and creating the most dynamic precious metals buying opportunity in generations.

Typically, I start each morning with a discussion of the day’s “horrible headlines.” I could delve further into the pathetic U.S. labor situation – in which “recovery” is purported despite obvious evidence stating otherwise; or the fact that 80% of college seniors can’t find a job, in many cases earning less than the minimum wage.  Sure, Obama proposed yesterday to partially “bail them out” – but guess who’s going to be on the hook for the $120+ billion of delinquent student loans when this new executive order goes into effect in December 2015?  For that matter, who’s going to pay for upcoming Highway Trust Fund “fiscal cliff” – which, if not funded by freshly printed money could yield hundreds of thousands of job losses?  And who’s going to employ the tens of thousands of people who will lose their jobs when mandatory minimum wage increases are instituted – let alone the Obamacare insurance mandate; as cumulatively, America’s plunge into socialism further implodes an already dying economy?  Frankly, no chart better describes the historical wealth inequality created by the Federal Reserve than the below depiction of New York’s real economy; that is outside the “1%” that receive free Wall Street money.

Sadly, “horrible headlines” are endless these days; and we assure you, this trend will continue until the system inevitably collapses of its own weight.  However, today we want to delve deeper into the market manipulation since that fateful summer of 2011, when the U.S.-led “powers that be” decided to go for broke in a final failed attempt to usurp Economic Mother Nature.

To do so, we take you back to the aforementioned “breaking” of the system in 2008.  Below are the two charts that say it best, although dozens of others would tell the same story.  The U.S. “monetary base” and Federal Reserve balance sheet are but two examples of reckless, unfettered money printing gone wild; which if combined with unreported “off balance sheet” activities like “secret loans,” swaps, and derivatives would appear dramatically worse.

The same goes for Europe, Asia and the “emerging markets” which not only dramatically diluted their currencies, but were hit by the additional jolt of Federal Reserve exported inflation.  In other words, no matter how much a nation prints, it can NEVER keep pace with the unlimited printing presses of the world’s reserve currency.  This is why the average currency has declined 23% since 2008’s Global Meltdown I, including 27% in the “Fragile Five” nations holding 26% of the world’s population.  Said inflation, as always, showed up most prominently in items we “need versus want” – like food and energy; which is precisely why the “Arab Spring” and countless other social insurgencies were catalyzed.

However, what occurred between 2008 and 2011 pales in comparison to the past three years; as following the 2011 European sovereign debt crisis, the U.S. losing its triple-A credit rating; and the ensuing economic plunge and financial market carnage, global Central banks decided that not only should money printing be accelerated exponentially, but financial markets 100% commandeered.

Unrelenting “recovery” propaganda was expanded as well; but as you can see below, the result has been decidedly unfavorable.  In fact, other than the global food price index falling mildly from its 2011 all-time high, essentially all other variables are dramatically worse.  That said, even this statistic can be misleading; given that in the U.S. alone, we this year have seen beef, chicken, milk, shrimp, pork, bacon and countless other food commodities hit all-time highs as potentially catastrophic droughts threaten vital agricultural output in both California and Brazil. 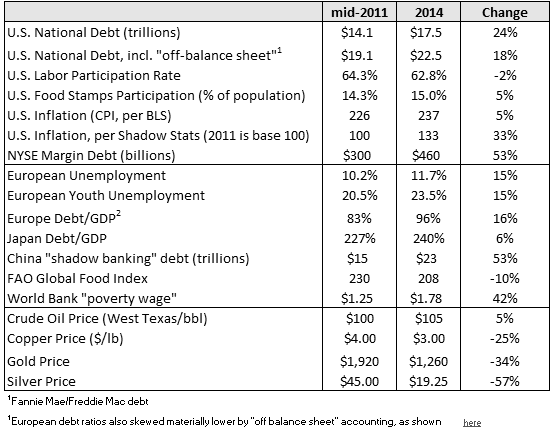 Moreover, note how the highly industrially-sensitive metal, “Dr. Copper” has seen its price decline by 25% over this period, whilst the ultimate “need versus want” product crude oil has increased.  Kind of makes you wonder how amidst the aforementioned economic and currency collapses, gold and silver could dramatically outperform essentially all commodities, huh?

Well, the answer is quite simple; as starting with September 2011’s “Operation PM Annihilation I” – when PMs were attacked simultaneous with the Swiss National Bank pegging the Franc to the dying Euro (in what will long be remembered as the “shot heard round the world” in the “final currency war”), we have experienced the most violent market “management” of our lifetimes.  Shortly afterward, the Mario Draghi promised to do “whatever it takes” to save the Euro (culminating in last week’s decision to reduce deposit rates to negative territory); followed by the Fed’s “QE3” and Japan’s “Abenomics,” as the terminal phase of the four decade mad experiment in global money printing was launched. 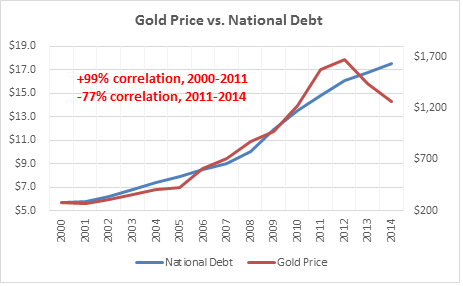 Since then, TPTB have “achieved” the desired result of higher stock and bond prices and lower gold and silver prices.  However, as noted in the table above, the real economy has dramatically deteriorated as has the world’s experience with debt, inflation and social unrest.  Frankly, the situation has become downright comical; as with each passing day, the gap between economic reality and financial market “signals” grows wider; as does the wealth inequality between the “1%” and the rest.  The footprints of the PPT, the Fed and the Exchange Stabilization Fund – here in the states and overseas – couldn’t be more obvious.  And it all goes back to the “point of no return” in mid-2011, when TPTB decided to commandeer the markets in a last ditch attempt to “kick the can” that last mile. 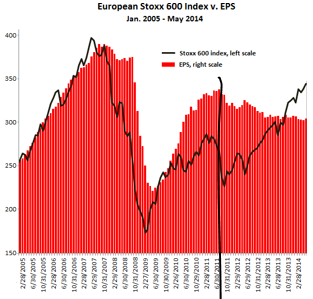 In the coming years, we assure you said gap will be “filled” – either via financial market hyperinflation or a 2008-style crash bringing about the same result.  Either way the real losses from overvalued financial holdings will be catastrophic, whilst the real gains from holding physical gold and silver will be historic.  The world will likely be a very ugly place when this occurs – in which survival will be far more important than profit.  However, if you have protected yourself before this happens, you will have the best chance at weathering this generational financial storm.

Hopefully, you are starting to realize the “point of no return” has in fact been passed; and thus, no matter what TPTB attempt going forward, they must fail.  Every fiat currency regime in history – 599 to be exact – has failed and this – global – regime will be no exception.