Waiting Through Prototypical Cartel Shenanigans, for the Next, Inevitable Precious Metals Up Leg

It’s Monday morning, and the Yen/dollar exchange rate is unchanged from Friday’s close. Thus, gold and silver should be unchanged, too – right? Which I say facetiously, as the premise I wrote about Thursday, based on 15 years of tick-for-tick Precious Metal experience, is again proven true. Which is, the “trading relationship” between Precious Metals and the Yen/dollar – just like their fundamental relationship – is pure fiction. At least, the ridiculous notion that the Bank of Japan’s attempts to destroy the Yen – with, say, “helicopter money,” is LOL, “bearish” for gold and silver.

Frankly, it doesn’t take rocket science to see that when the Cartel has the (temporary) upper hand – which, per yesterday’s article, in which I highlighted the “commercials”’ record short position, they are in desperate seeking – they create a “whatever is down” algorithm scheme, in which paper PM prices are conveniently linked to whatever the day’s “decline du jour” might be. Which in turn, enables the added benefit of a dumbed down, in many cases captive MSM to purposely – or in some cases, inadvertently – spew the anti-PM propaganda they so desperately rely on. Such as, for instance, if oil prices decline, saying “gold is down due to a broad commodity decline.” Or, if stocks are down (will that ever be allowed?), “gold down due to deflation.” Or, if the yen is down, “gold down because the carry trade is safe, so risk-off assets are being sold.” Or, if bonds are down, “gold down, because the economy is strong, and the Fed will raise rates.” Or heck, if bonds are up, good old “gold down, due to deflation.” Etc, etc., etc.

Why am I so agitated this morning – as if I haven’t been put through the Cartel ringer (literally) thousands of times already? Because every time prices are blatantly smashed “decline,” the so-called “good guys” are out in force with their “short-term bearish, but long-term bullish” calls – utilizing everything from “technical analysis”; to “proprietary analysis” – like yen/dollar relationships; toward their universal goal of selling newsletters, of being viewed as an “expert.”

Heck, I’m essentially 100% sure that one in particular plays this game with the thought process of “the Cartel typically wins; so, in order to appear less ‘gold-buggish,’ I’ll continue to assume historic patterns will prevail – but neglect to give a specific reason, so as to maintain a newsletter-subscription-price-worthy aura.” In other words, my friends – particularly now that we are in a bonafide Precious Metals bull market, in all fiat currencies – it’s time to, for the first time, resist the urge to believe some new “reason” exists for short-term weakness.

To the contrary, today’s weakness could not be more obviously motivated – particularly when considering that “Sunday Night Sentiment” raids like last night’s, occur essentially every week…150 of the past 156 Sundays, to be exact. Just like the equally “sixth sigma” attacks at “2:15 AM” EST – 668 of the past 770 trading days, to be exact; and heck, the 4:00-5:00 PM EST post-NYSE “aftermarket,” in which PM prices are “walked down” roughly 90% of the time. 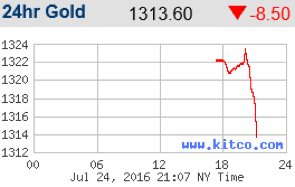 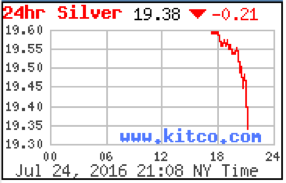 Which was, the aforementioned, all-time high, “off the charts” commercial short position in silver, coupled with a nearly all-time high short position in paper gold. Just as it was during late May’s “FOMC Minutes attack” – which as I predicted, miserably failed; when the Fed, coupled with their manipulative partners, the Cartel henchman that call themselves “bullion banks” – worked together to create a spread a lie that the economy was finally “recovering”; and thus, a June rate increase was being considered. Which of course, didn’t happen – as, to the contrary, the June FOMC statement was the most dovish of Whirlybird Janet’s tenure.

Heck, no other market so much as budged when last night’s raid occurred, despite a weekend of “PM bullish, everything-else-bearish” news flow, like U.S./IMF/China dissension at the G-20 meeting; a major Islamic terror attack in Germany; the realization that Portuguese banks, like the Italian banks, require a bailout; and intensifying negativity towards the massively oversupplied crude oil market, which is again down sharply this morning. And oh yeah, the forced resignation of the head of the Democratic Party, Debbie Schultz-Wasserman, on the eve of the Democratic Convention, due to Wikileaks-exposed emails showing that she clearly spearheaded a campaign to smear Bernie Sanders, and thus ensure a Hillary Clinton victory. And how did the Democrats respond – other than, LOL, accusing “the Russians” of leaking the emails? I kid you not, by appointing Schultz “Honorary Chairman” of the Clinton election committee! Remember, what Wall Street fears most – and Precious Metal markets desire most – is a Donald Trump victory, given the massive uncertainty it would bring. And if the utter collapse of the Democratic Party – on the eve of the DNC – doesn’t increase the odds of a Trump victory, I don’t know what will.

And not only is an FOMC meeting scheduled for Wednesday; but LOL, so is Deutsche Bank’s second quarter earnings report, which will force the 100-plus taxpayer-funded lackeys sitting in on the FOMC meeting, to have their red-line pens on call. Throw in the fact that a second Cartel “key attack event” occurs this week – i.e., Tuesday’s COMEX August options expiration day, through Friday’s “first notice day”; not to mention, Friday’s Bank of Japan policy meeting, in which it may specify Shinzo Abe’s “helicopter money” plans; just as the latest round of potentially damning Italian bank “stress test” results will be unveiled; and you can see why the Cartel is so aggressively, and blatantly, on the offensive.

Let alone, with stock market valuations at all-time high levels, as corporate earnings continue to disappoint; and sovereign yields disappear further into the “financial roach motel” that is negative interest rates. And for those that actually believe the Fed may pull another “FOMC Minutes Attack”-like round of propaganda, by pretending a September rate hike is “on the table,” rest at ease. Oh, I assure you they’ll suggest as much, in the most opaquely vague Fedspeak imaginable (i.e., “if economic conditions improve to our satisfaction, we’ll consider it”). However, with the global economic implosion expanding (including an accelerating plunge in what were supposed to be “transitorily” low oil prices); worldwide political stability crumbling; and oh yeah, a Democratic election victory to assure, the chances of a Fed rate hike, in my view, are zero. Not to mention, the fact that, as discussed in last Monday’s Audioblog, there is no real historical correlation – nor should there be – between nominal interest rates and Precious Metal prices. And oh yeah, the fact that the current Precious Metal bull market commenced the very week the Fed “raised rates” last December!

In a nutshell, PM holders are yet again being forced to endure the same manipulative ignominy they has dealt with for the past 15 years – just as in March, May, and the run-up to the “guaranteed” Bremain result in June. For those holding physical gold, silver, and platinum, it should be “no sweat,” as there’s not a chance you’ll be selling – even if your anger level, like mine, rockets sky high. For those that don’t, you’re being handed a fantastic opportunity to protect yourself whilst the political, economic, and monetary world crumbles around you. So don’t waste it, as one day soon, you’ll be kicking yourself for not having acted on one of the last remaining opportunities to preserve your assets’ purchasing power – which in most parts of the world, is a ship that long ago sailed. And truth be told, it could “sail” from “civilized” nations like the U.S. any day, at any time.