Janet Yellen spent an entire career climbing the Ivory Tower, brainwashing herself into believing Keynes was smarter than von Mises and idolizing Alan Greenspan, Ben Bernanke and likely John Law.  At age 67, she finally reached the pinnacle of academic success in chairing history’s most virulent money printing edifice.  Unfortunately, just four months into her tenure, she’s already lost most – if not all – of her credibility as her policy of pretending the Fed’s policies have fostered “recovery” is rapidly losing its effectiveness.  To wit, five years of unfettered money printing, market manipulation and propaganda has accomplished nothing but historic revolution-inspiring wealth inequality, as the only things “growing” are worldwide debt, inflation and unrest.  Not to mention, unprecedented market complacency and bubble-like valuations sure to end in tears either via 2008-style crash or 1920’s-style Weimer hyperinflation. 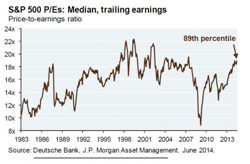 Yesterday’s FOMC statement was so blindingly dovish and so pathetically transparent, it’s hard to believe the “tapering” propaganda scheme that commenced with last April’s blatant precious metal attacks isn’t nearing its conclusion.  Frankly, the Fed’s presentation was so defensive and uncoordinated it felt like I was watching General Custer in his last hours at Little Big Horn.  Make no mistake, the Fed is decidedly losing its propaganda war; and when it is shortly defeated – as Japan was last April, and the ECB two weeks ago – three years of historic precious metals suppression and “recovery” propaganda will be abruptly halted.  The Keynesians will be forever discredited and the end game of dramatic global currency devaluation will commence.  And when it does – perhaps, later this year – if you haven’t already protected your net worth with REAL MONEY, it will be too late.

Before I start on today’s extremely important topic, kudos to “Simon Black” of the Sovereign Man for putting together two of the most relevant – and terrifying – articles imaginable.  The first, highlighted in yesterday’s “Most Important Reason to own Precious Metals – Revisited” – discusses how Chinese grain imports alone require a land mass the size of California growing each year by an area the size of the Netherlands.  And thus, it’s all but a fait accompli the world will experience dramatically higher food prices ad infinitum.  Today, he wrote of how China not only has a potentially disastrous lack of arable land, but an extreme dearth of fresh water.  In other words, China will never have the ability to feed itself, which can only exert additional dramatic upward pressure on food prices.  And given that America is the world’s largest food exporter – it is experiencing dire agricultural supply pressures – the growing rift between the two superpowers could one day yield catastrophic financial, trade and or military confrontations.  But hey, Janet Yellen called soaring food and energy prices “noise” yesterday, so I guess “all’s well.”  Which is true we guess until it isn’t.  Just ask the starving people in the “Arab Spring” nations or for that matter Brazil, Argentina, Venezuela, Turkey and Greece – the latter of which is in such dire straits, a full two-thirds of labor “wages” are currently being paid via barter.

And now, for the day’s “main attraction” – i.e., yesterday’s embarrassment of an FOMC statement starting with the “mystery surge” in the 10-year Treasury yield we discussed yesterday.

The Fed’s job is to lie about everything – from employment, to inflation, to its own policy actions – whilst its ‘traders’ work with the PPT, ESF, and gold Cartel to manage investor ‘expectations.’  To wit, yesterday’s “mystery surge” in the 10-year Treasury yield to a more ‘comfortable’ 2.65% from the 2.60% line in the sand we have written incessantly about.

Remember “tapering” or otherwise, the Fed is the world’s largest buyer of Treasury bonds – to the tune of $35 billion/month as of now, at least.  And given it’s their meeting, and they have no “lockout” period preventing them from insider trading, you can bet any changes in Treasury prices the day before such statements are politically motivated.  To wit, we have long discussed how TPTB are particularly vigilant in “managing” markets ahead of FOMC statements; as not only is the Fed’s credibility at stake, but “undesirable” movements could make such policy statements “uncomfortable” at the least and untenable at worst.

For example, if the Fed knows it is about to make an extremely dovish statement, it cannot allow the 10-year rate to hover around the 2.60% yield we have highlighted as their downside “line in the sand.” For that matter, PM prices must be pushed down beforehand, as when they inevitably surge, the goal is to have it occur from lower levels.

That said, no matter what spin the MSM attempts, there is no conceivable way to put lipstick on this pig.  That is yesterday’s statement was as dovish as it gets; which is why this morning, the 10-year rate is back below 2.60% (at 2.57% as I write), en route to inevitably plunging below last year’s lows as the entire world bets on “QE to Infinity,” i.e. the “most damning proof yet of QE failure.”  Ultimately, such lunacy will end in catastrophic hyperinflation; but until then, a Japan-like scenario appears more likely.

As for the FOMC statement itself, it wasn’t quite the “Jimmy Shaker Day” we discussed yesterday, but as close to it as imaginable.  We continue to predict said “Waterloo” is coming sooner rather than later – likely, by year end; and yesterday’s blindingly dovish – and transparently clueless – commentary significantly solidified our view.

To better understand just how clueless the entire “mainstream” world has become, look no further than the “top tier” news organization Reuters stating, “Fed cuts growth forecast stays confident about recovery.”  Well duh, of course they’re “confident” in the mythical “recovery” they’ve propagandized for the past five years – as their jobs, credibility, and the fate of the dollar itself depend on it!  Not to mention, the ability of Keynesian fiscal and monetary policy to ever work again.

Unfortunately, as they say that and $0.50 won’t get you a cup of coffee.  “Confidence” is a nice concept, but better yet would be actual results.  And as you can see below, Ivory Tower and Wall Street economists alike have been overly optimistic for eight years running – including the so-called “good years” of 2006 and 2007.  As for the Fed itself, its track record of predictive failures is legendary – as one would expect from a nation in decline, as forecast by an agency mandated to cheerlead.  To wit, the Fed reduced its 2014 GDP growth estimate to 2.1%-2.3% from 2.8%-3.0% last quarter; naturally, blaming “the weather,” a notion we soundly disproved four months ago.  Better yet, as you can see below, their initial 2014 estimate was 3.3%-4.0% growth; and thus, their median forecast has already been chopped by 40% before we even reach the time of year when economic activity tends to significantly weaken.  Let alone, if exploding crude oil prices don’t take the global economy down single-handedly.

Better yet, the only change in the FOMC board’s outlook for future rate increases was that instead of 13 and two governors anticipating the first Fed Funds rate increase in 2015 and 2016, we now have 12 expecting the first increase in 2015 and three in 2016.  Think about that for a second, and tell us if you think anything other than “ZIRP to Infinity” is in the cards; let alone, QE and potentially “NIRP” to Infinity.

Laughably, the average Fed Funds rate expectation at the end of 2015 increased from 1.0% to 1.1% compared to the average rate over the past 60 years of 5.2%.  LOL, this is the most “hawkish” statement a 21st century FOMC board has made!  And yet, it wasn’t even the day’s biggest “highlight” – which goes to Whirlybird Janet herself; for first, claiming the aforementioned food and energy price surges are just “noise” and second, that there’s nothing bubble-like about stocks hitting all-time highs whilst the Fed complains of excessive bond market froth.  An honorable mention goes to the Fed’s long discredited “spokesperson” – Jon Hilsenrath of the Wall Street Journal – who just nine minutes after the FOMC statement’s release published a 530-word article discussing the Fed’s “more aggressive tightening plans” than those purported at previous meeting regarding potential actions over the next two years.  As for the sum total of such foolishness, we’ll let you decided how credible it sounds.  And as for said “noise,” let’s hope its less clamorous than what’s going on in the Ukraine and Iraq; much less, the ramifications of Russia yesterday proposing a global “anti-dollar alliance.”

As for the “markets,” not only are stocks soaring – led by the $29 trillion “investment” of global central banks” – but continue to be led by the most speculative companies imaginable with the smallest earnings and weakest balance sheets.  Sound familiar, like in 1999?  Consequently, the VIX or Volatility Index is on the verge of breaking to a new all-time low as the “giant sucking sound” we wrote of earlier this week is creating a vacuum under the market that ultimately must be “filled”; either via the aforementioned alternatives of 2008-style crash or 1920’s-style Weimar hyperinflation.

Gold and silver are surging – as usual, at the only time of day they have been “allowed” to do so over the Cartel’s two decade reign of terror.  That said, we strongly believe the COMEX’ days as global PM “price setter” – via fraudulent paper contracts – are numbered; and when such tyranny ends, instead of waking up to “2:15 AM” EST raids 90% of the time, you’ll see precious metals significantly higher by that same percentage. In most cases by more than the 1.0% upside cap the Cartel imposes on roughly 95% of all trading days and 2.0% on 99%.

One by one, the perpetually “short-term bearish, but long-term bullish” newsletter writers are “giving up the ghost” on their inane calls for $1,000-$1,100/oz gold – let alone, whatever silver price forecasts accompany them.  And thus, the only remaining PM “bear” is Cartel leader Goldman Sachs desperately holding the party propaganda line in hopes of maintaining the status quo a slight bit longer, and privately acquiring as much physical gold and silver as possible.  Hmmm, I wonder who placed an order for $497 million of gold futures this morning…

In our view, yesterday’s FOMC statement represents a major inflection point in the war being fought between TPTB and reality.  Thus, no matter how much money printing and market manipulation is covertly executed – and propaganda publicly spewed – they can no longer hide the Fed’s alarming combination of cluelessness, desperation and dovishness.

Will the July 30th FOMC statement – “coincidentally” scheduled hours after the publication of second quarter GDP – be Janet Yellen’s “Jimmy Shaker Day,” when she is forced to admit the Fed’s policy is not working?  Perhaps said cataclysm can be put off slightly further.  But either way, yesterday was clearly “Yellen’s Last Stand” in her war against the unstoppable recession – and hyperinflation – that stalks the entire world like the four horseman of the apocalypse.  With gold and silver trading well below their respective all-in costs of production – amidst record global demand, declining production and historically weak investor sentiment, we cannot imagine why anyone would wait to protect themselves with the only true “anecdote” to what’s coming.