On the fateful day of June 19th, the Fed misjudged its ability to control markets – by hinting it might taper if the economy improved.  Helicopter Ben was drunk with confidence, given QE had pushed the benchmark 10-year Treasury yield down to 2.1%; whilst the PPT had taken the Dow to new highs; the Cartel had smashed PMs to oblivion; and nary an “inflation fear” was reported anywhere.

Knowing full well that his days as Fed Chairman were numbered, he desperately sought to “re-write” a legacy of taking rates to zero, holding them there for five years, and exploding the Fed’s balance sheet by 500%.  And thus, he felt it “worth the risk” to hint at tapering; which unfortunately for him, became a self-fulfilling prophecy when the government propaganda machine stepped up its game in the second half of the year.  A series of glowing, but blatantly manipulated NFP reports followed; which despite their most glaring flaw, a plunging Labor Participation Rate, were ballyhooed as the beginning of a new economic boom.  Thus, Bennie was all but “forced” to commence the tapering process in December, despite the MSM ignoring the giant pink elephant in the room; i.e., that “tapering,” per se, was but a mirage. 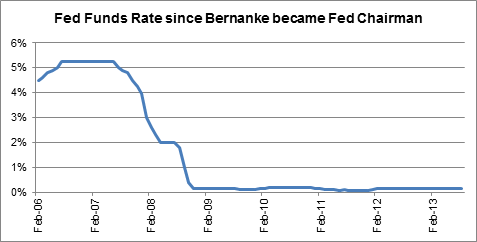 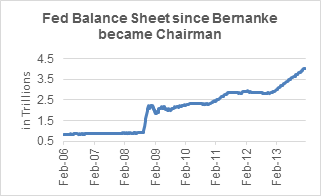 Despite the bogus employment reports, it couldn’t be clearer the U.S. economy was measurably weakening.  The all-important housing sector started to roll over the second rates inched up, and the holiday shopping season was the worst since the post-crisis environment of 2009; whilst inexorably, that pesky Labor Participation rate continued to plunge.

However, in a world where global confidence in – and usage of – the dollar has been down-trending for years, even the hint of a reduction in Treasury and mortgage bond monetization caused extreme upward pressure on interest rates.  Not to mention, the PBOC’s momentous November 20th statement that “it’s no longer in China’s favor to accumulate foreign-exchange reserves.”  And thus, on Thursday, September 5th – i.e., barely two months after Bennie opened his trap – the benchmark 10-year Treasury yield hit an intraday high of 2.99%, before closing at 2.98%.

Fortunately for the Fed, the following day – Friday September 6th – was an NFP employment report day.  And thus, the BLS simply fabricated a “worse than expected” number to relieve pressure on Treasury bonds, as you can see below.  However, when the year-end push to ensure maximum Wall Street bonuses commenced after Thanksgiving, the government propaganda machine was turned up full tilt; generating positive “diffusion index” readings and a “strong” November NFP report; again, despite plunging Labor Participation, weak retail sales and a generally punk global economic outlook.

And thus, before the Fed knew it, the 10-year Treasury yield had again reached 3.0%; thus, threatening to destroy the recovery mirage it has worked so hard to foster.  To wit, we could not have been more vociferous in our views that rapidly rising rates will implode the economy.  And thus, it shouldn’t surprise anyone that today’s NFP report was as bad as could possibly be imagined.  As I write, the 10-year yield has been “turboQE’d” back down to 2.88%; and rest assured, an accompanying “no taper” tsunami will wash over the MSM through at least the January 29th FOMC meeting; and likely, well into Janet Yellen’s tenure, as the following FOMC meeting isn’t until March 19th.  Another $225 billion will be added to the Fed’s balance sheet by then; and off balance sheet, perhaps significantly more.

As for today’s horrific jobs report, it included every imaginable weakness.  But before I analyze it, recall what we published last week – regarding how Wall Street has been clueless about recent economic “calls”; particularly, how Byron Wien was wrong about his 2013 predictions, and ALL of Wall Street regarding silver prices.  Remember, Wall Street wouldn’t dare acknowledge – or even consider – the potential for manipulation; and thus, its analysts are “flying blind” to start with.  Irrespective, they are no better at predicting markets and economic data than the average Joe or Jane; so don’t for a second fear they know what they’re saying.  And this goes double for Precious Metals; as not only is next to ZERO credible analysis done on the sector, but gold and silver represent the mortal enemy of the banks.  To wit, I present Wall Street’s forecast for today’s December NFP report, of a net gain of 200,000 jobs.  Better yet, the “world’s best analysts” assumed the unemployment rate would remain unchanged at 7.0%; even though the Miles Franklin Blog predicted it would plunge toward 6.5% due to the anticipated 1.3 million person reduction in the Labor Force.

As it turns out, just 74,000 jobs were created – compared to the ridiculous 238,000 purported by the ADP on Wednesday; including a net loss in construction jobs, compared to ADP’s purported gain.  Let’s see; surging interest rates, weakening home prices and cold weather in December.  Gee, I wonder “who’s lying.”  And as we predicted, the “unemployment rate” plunged to 6.7%; however, we are still at a loss to explain how the BLS assumed the Labor Force only declined by 550,000 people.  I mean, do the math.  If 1,330,000 people’s unemployment benefits terminated, but only 74,000 jobs were created (more than half of which were “temps”), it would seem that the Labor Force should have decline by closer to 1,250,000 than 550,000; thus, pushing the unemployment rate well below 6.5%.  But then again, as we’ve stated countless times, the government literally fabricates all economic data; and in some cases, are overtly exposed.

To wit, we’re told 2013 was a rip-roaring year for job creation.  However, less jobs were actually created in 2013 than 2012!  Moreover, the mean duration of unemployment sits near all-time high levels, at more than twice the average level of the past six decades; while the difference between reported and implied unemployment rates have never been higher.  We won’t even bring up John Williams’ TRUE unemployment rate of nearly 23%; as suffice to say, there’s enough government lies to report without “going there.”

As for today’s “markets,” TPTB are doing everything they can to stabilize the situation.  Most important on their agenda was pushing rates down; and subsequently, calming pressure on the Fed to further “taper.”  The Dow Jones Propaganda Average, of course, had its losses capped at -100 points (i.e. “PPT limit down level #2); whilst the Cartel has held gold to gains barely above 1.0% – yet again, just below its current “line in the sand” at $1,250/oz.  As for silver, what more can we write of the Cartel’s fear of silver surging through its two-month old “line in the sand” at $20/oz.; given how low global inventories are, and strong PHYSICAL demand is becoming?  The “Cartel Herald” capping algorithms” couldn’t be more obvious, below; but fortunately, with each passing day such obviousness is becoming more viral.

Which brings us to the sorry state of the dying COMEX; which clearly, is in its final days as the world’s primary Precious Metals pricing mechanism.  As you can see below, another 63,000 ounces left the registered inventory category yesterday, leaving a measly 416,000 supporting a more than 100:1 paper to physical Ponzi scheme.  Worse yet, it’s been nine days since the December gold contract closed, and still 200,000 ounces await delivery from registered inventory.  If they are not delivered, this represents an all-out COMEX default; and if so, just 200,000 ounces will support the entire COMEX gold fraud; i.e., down 95% from the April levels, when the Cartel commenced the infamous “Alternative Currencies Destruction.” 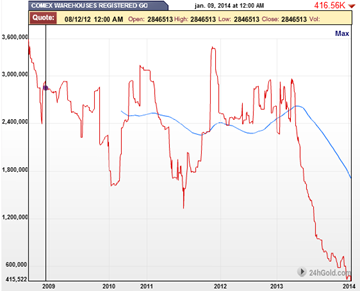 If you take one thing from this article, it should be what the Miles Franklin Blog has loudly stated all along.  That is, the Fed CANNOT allow interest rates to materially rise.  Clearly, they have set up their own “line in the sand” at 3.0% on the benchmark 10-year Treasury yield; and thus, they’ll utilize all of their “partners in crime” to fabricate situations enabling them to hold rates below that all-important level.   The Fed’s fiat currency Ponzi scheme is in its final phase, now that debt growth – worldwide – has turned parabolic.  And thus, its very survival depends on financing it at historically low interest rates.  Which of course, could end at any time – if global confidence losses overwhelm their manipulation efforts.

Unfortunately, the Fed’s hyper-money printing has exported massive inflation to the world’s “non-reserve currencies” – i.e., all of them, per “The most important article I’ve ever written.”  And thus, the current attempt to cap interest rates will only make things worse.  It’s no surprise that John Williams predicts Hyperinflation in 2014; and if he’s off in his timing, it won’t be by much.  Thus, we plead that you consider your financial options, while the window to PROTECT yourself remains open.  Feel free to contact Miles Franklin at 800-822-8080 if you have any questions, as we’re always happy to answer them!