That didn’t take long did it?  I of course am speaking of the second overnight and global meltdown of the credit markets …in the last four business days!  Before getting into this topic which I believe will soon be seen in retrospect and by historians far into the future as “THE” trigger event.  The second piece I sent out yesterday “I bet you didn’t even notice it” was written over the weekend, I planned to send it out for Tuesday’s reading.  After sending it to Jim Sinclair to see what he thought, he strongly urged me to get that piece out for Monday.  Had I not followed his advice, yesterday’s piece would have been a day late, and old news by the time it went public.  So, I am eating a bit of humble pie here, the first fruit has already fallen from the seed of our partnership! 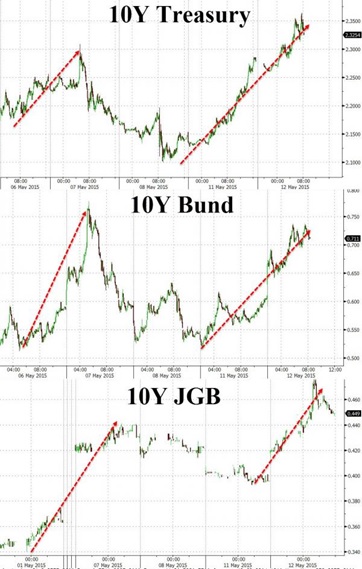 …But wait, just as last Thursday, credit again reversed so, …no harm no foul? 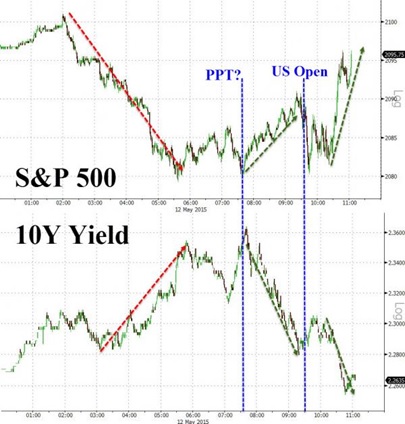 It is so important you understand “what” is happening and have an idea of “why”.  Let me tackle the what part first,  We are witnessing sovereign bonds and their yields move in wider standard deviations than most commodities ever do.  When you hear the word “commodity” you should think “risky risky” because they have wild moves limit up and limit down, it’s the way the game is played and should be expected.

Sovereign notes and bonds are (were) the opposite.  They are THE bedrock of the entire financial system.  They are “supposed to be safe”.  They are supposed to be for widows and orphans.  Sovereign credits are THE core to nearly all retirement funds on the planet.  If everything else fails, it is this sector, government bonds, which should stand tall and stave off the failure of retirement plans.  The action over the last week is anything but bedrock or “stable”, in fact, it is volatility in the bond markets that are endangering everything financial; suffice it to say “a foundation of BAD credit is not foundation at all”!

The next question is “why”.  For laughs I guess I should point out the explanation of a guest moron on CNBC.  He claims that yields on European bonds are rising because their economy is turning up.  He went on to actually say these spikes in yields (drop in prices) are actually a very good thing because they provide “proof” of future growth.  Never mind all of this debt is held as collateral for everything else, lower bond prices are “good” when too much debt is the problem in the first place?

I would ask if he has even heard of a little country named Greece?  Is it even possible that Eurobonds are being sold because fear of a Greek default?  Is the fear of a default cascade the reason bonds are being dumped in wholesale batches?  I have heard the explanation that “net issuance” has again gone positive as the reason for these air pockets.  Maybe this is true, I do not think so but if it is then there is a very real problem!  If this is true, it means the market cannot absorb the issuance and yields are going higher not by design but because there are simply not enough buyers, an “uh oh moment” so to speak.

I have a little different theory which if not so now, or “yet”, it will be soon!  I believe much of the bond market weakness is being caused (and saved) by OTC derivatives.  I believe and have said multiple time before, “someone(s) out there is already dead”.  I believe that “bankrupts” are strewn all over the place and have been hidden with overnight loans… but there is a new problem.  The recent volatility has created more and more losers …which creates more and more FORCED SALES!  (Please don’t scoff at this as there are a handful of “choice” firms who have not had a single day of trading losses in over four years, with a whole string of losers in their wake?)

You see, for all intents and purposes we have lived through a global bull market in bonds since 1982.  This has culminated in negative interest rates and we ended up with everyone on the same side of the boat with no one left to “buy”.  Of course you could ask the question “why would anyone buy?” with zero or even negative interest rates.  Only a few of the “sane ones” out there have asked this question until now, it seems maybe a few of the insane may be regaining at least some sense of sanity!?

As I did yesterday, I will repeat “why” all of this is important.  “Credit” is what our entire system is based upon.  It has become the basis for all paper wealth and the lubricant for all real economic activity.  Should credit collapse (it will), everything we have come to believe in (been fooled by) will change.  Credit has come to be viewed as “wealth”, it is considered an “asset”… with just one problem, it is neither!  Credit is only an asset and can be considered wealth as long as the borrower “can pay”.  And herein lies the rub, Greece cannot pay which means the holders of Greek debt (along with issuers of CDS) cannot pay and so on.  It is not just Greece of course, it is the entire Western world, it just happens that Greece is first because they lied the most with the help of Goldman Sachs and other “benefactors”.  If counterparty risk did not matter, there would be no problem.  The reality is this, the whole show from single dollar bills to trillions in derivatives will be engulfed in this “counterparty risk”!

Derivatives are a $1 quadrillion ticking time bomb, soaked in gasoline and sprinkled with gunpowder.  The volatility we are now seeing are the matches!  While we have had two “saves” where the central banks have stepped in and bought debt to steady the markets, the day will come when it does not work.  This game has gone on for a very long time and resulted in a mania where most all of the players are “long”.  The only potential new longs left are the central banks themselves who can only buy more debt with money created by debt.  The day will come when the ability to “save” is overcome.  Along with it will come the freedom of prices created by Mother Nature herself.  Stocks, bonds, currencies, commodities and yes, even silver and gold will finally break the chains of “algo mania”.

Finally, this you must understand, “power” is currently debt.  The control of debt is also the power of prices.  Once debt breaks loose and trades out of the control of central banks, these central banks will also lose the control to price everything else.  We have come very close twice in the last four trading days of the credit market control being broken.  Will loss of control be on the next convulsion?  Or the next?  I nor anyone else knows this answer, I do know the greatest margin call in all of history will be issued … and it cannot be met!