A Major Silver Shortage Must and Will Occur

Never before has the “chasm of destruction” between economic reality and manipulated financial markets been this wide; and likely, never will it again.  The “853 points of infamy” the PPT managed to goose the “Dow Jones Propaganda Average” this week, amidst not only the “most laughable FOMC statement ever,” but a slew of ugly economic, monetary and geopolitical developments was truly a sight to behold.  Let alone, the accompanying, historically blatant precious metal capping; which frankly, can only be appropriately compared to last month’s efforts to prevent the “Save our Swiss Gold” referendum from being passed.

Moreover, in textbook bond rigging fashion, the 10-year Treasury yield was goosed higher heading into Wednesday’s FOMC meeting – to not only create the perception of a “recovering economy” whilst Whirlybird Janet spoke, but prevent universal realization of the “most damning proof yet of QE failure”; i.e., plunging rates amidst said supposed “recovery.”  Unfortunately, amidst an onslaught of horribly bearish economic news – culminating on the largest weekly rig count decline in five years and most rapid fourth quarter Baltic Dry Index plunge on record – interest rates plunged anew Friday afternoon with the 10-year Treasury yield closing at 2.16%, enroute to its inevitable downside breach of 2.00%.  As for gold, we kid you not, it was this week capped an incredible 35 times at the key round number of $1,200 that has served as the Cartel’s “line in the sand” the past two months.

The MSM did its best to hype oil rising to $56.50/bbl. Friday afternoon, after having fallen as low as $53.50 on Tuesday morning.  Unfortunately, any number in the $50s – and for the high-cost U.S. shale industry, the $60s – is for all intents and purposes, catastrophic.  I mean geez, it was last Friday when oil fell below $60 for the first time in five years, prompting the well-deserved fear that has caused high-yield bonds to plunge since; and countless global currencies – like the Ruble, for instance – to crash.

Three months ago, we deemed the unprecedented currency volatility caused by the collapsing global fiat Ponzi scheme the “single most Precious Metal bullish factor imaginable.”  And this week, amidst the “bullishness” of the PPT-orchestrated equity surge, dozens of currencies closed at multi-year and in some cases all-time lows – including all five BRICS; as well as “commodity currencies” like the Australian Dollar, Canadian dollar, Indonesian Rupiah and Nigerian Naira; European toilet paper like the Euro, Pound and newly “NIRPed” Swiss Franc; and of course, the soon-to-be-hyper-inflating Yen.  Which, consequently, is why gold’s three year, Cartel-orchestrated “bear market” is decidedly OVER.

Most ominously, the Yuan fell to its lowest level of the year; as despite China reporting a record trade surplus, the PBOC is clearly alarmed by the Bank of Japan’s aggressive Yen destruction; and thus, is stepping up the “final currency war” to a potentially catastrophic level.  To that end, due to global fear that the “big one” has arrived, the dollar index has broken above its 2008 panic highs, yielding the potential for further currency calamity the world round.  Which, of course, will yield earnings carnage for the U.S. multi-nationals that are Congress’ largest lobbyers; and subsequently, increasingly shrill calls for the Fed to debauch the dollar further! 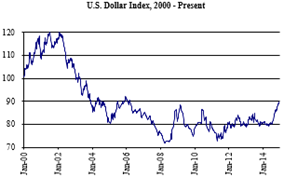 Speaking of lobbying, even I was amazed that not a single media outlet reported Congress’ “delay” – likely permanently – of the “Volcker Rule,” which was to limit the ability of “banks” like Goldman Sachs and JP Morgan to speculate with depositor money.  This, atop news earlier this week that Citibank-led lobbyists snuck into the “Cromnibus” spending bill full FDIC protection for more than $300 trillion of banking industry derivatives.  I mean, if there’s anyone left that believes bankers haven’t taken over America, I’d be truly shocked.  The damage these monsters have wrought upon billions of the world’s denizens is incalculable; and sadly, you “ain’t seen nothing yet.”

After this week’s shenanigans, it’s become crystal clear that globally, essentially anything published by governments or traded on financial markets is for all intents and purposes, fraudulent to at least some degree.  As we wrote last week, it couldn’t be more obvious that “all economic data are lies.”  And as for markets, we already knew America’s have been run by government and TBTF bank generated algorithms for some time.  However, even I was taken aback when I learned that 76% of all European equity quotes are generated by manipulative HFT algorithms.  But then again, I guess it’s “par for the course” in a world that is having the “veil” of fraud lifted so rapidly.  Last week, for example, with ZERO attention from an MSM too foolish to realize a real story when they see it, we learned that up to 50% of all online advertising traffic is due to fraudulent “bots” that aren’t really clicking at all.  In other words, the entire online advertising industry could be at risk; not to mention, the insane valuations of social media stocks that depend on them.  Heck, the vilest of them all, Twitter, just deleted half of all accounts created in 2013, as they were just “bot” created fakes.

And thus, we warn readers to discount everything they are told by corporate, media and government sources; which cumulatively, have shed nearly all remaining conscience and credibility, they still had.  And that goes triple for anything related to gold and silver – from media and Wall Street “forecasts”; to government reserves; exchange inventories, “open interest,” volume and “COT reports”; as well as “GOFO rates”; “derivatives outstanding”; and above all, anything related to GLD, SLV or other precious metal derivatives.  Heck, after 12 years of following mining companies and their stocks – including five years within the mining industry itself – I’m not sure why anyone believes a word mining executives say about their reserves; feasibility studies; or anything related to the costs of exploration, development or production!  And by the way, why anyone believes data from Chinese mining companies and exchanges would be any more genuine than American or European data is an even bigger mystery; as not only is the Chinese government’s precious metals strategy as “top secret” at it gets, but for centuries, Chinese society has been infamously opaque.

Which brings me to the biggest financial fraud of our lifetimes, that of the “Achilles Heel of the Financial World” – i.e., the tiny soon-to-be-extinct physical silver market.  Yes, I know, I just warned to discount all information regarding precious metals supply and demand.  However, that doesn’t mean it doesn’t exist – and of course, some data is more suspect than others.  Below, I have compiled data of the “less suspect” type; and either way, whenever data paints PMs in a positive light – a rarity indeed – I am more inclined to believe it.  For example, the U.S., Canadian and Indian governments published the below, wildly positive demand data – whilst the second graph, also care of the U.S. and Canadian governments depicts equally bullish supply data.

In the first, you can see that not only are the world’s top three silver demand sources – aside from the Chinese government, which purchases every ounce of Chinese-produced silver, and doesn’t publish import numbers – have not only generated an incredible 16% annual growth rate over the past seven years, but an estimated 7% this year alone.  Better yet, the U.S. and Canadian demand occurred amidst the lowest Western sentiment since the bull market commenced 15 years ago, and the Indian demand amidst onerous 10% import tariffs and an openly anti-PM Indian Central bank.  As for the second graph, it couldn’t be more obvious that U.S. and Canadian production – which combined accounts for roughly 6% of the global total – are in terminal decline.  Not that the entire world is experiencing a decline this steep.  However, generally speaking, whatever growth still remains is meager; and thus, the panel of experts on October’s “Miles Franklin Silver All-Star Panel Webinar” concluded that following the past three years’ Cartel-orchestrated price plunge; plus, a decade of exploration underinvestment care of the capital strangulation caused by mining share suppression; and of course, plunging base metal prices, given that the majority of silver production is by-product from base metal mines; it is entirely possible that global silver production declines 25%-50% over the next 3-5 years, unless prices significantly increase – NOW.

Moreover, not only is monetary demand at an all-time high, amidst the most wildly bullish fundamentals of our lifetimes – which will only become more so as “QE to Infinity” expands in earnest; but industrial silver usage is expanding significantly, given the unique characteristics that have made silver the world’s second most broadly used commodity, trailing only crude oil in number of applications.  This joint report by the Silver Institute and CRU Consulting, published last week, forecasts silver industrial demand – that is excluding silverware, jewelry, and coins and bars – to increase by 27% over the next five years to 680 million ounces.

Simultaneously, the great Steve St. Angelo published this article Friday, describing how not only is GFMS (Gold Fields Mineral Services, a private PM consultancy) estimating global mine supply growth of less than 4% in 2014, but total supply growth of less than 2% due to plunging scrap supply at today’s historically suppressed prices.  Moreover, Steve’s proprietary research reveals that 2014 mining supply growth is more likely to end 2014 at closer to 2% than GFMS’ 4% forecast; which, if this is the case, would put total supply growth not far above ZERO, with the aforementioned supply plunge looming and demand set to explode.

Based on this data, and the U.S., Canadian and Indian demand data above, I have put together the below chart.  As you can see, the “industrial fabrication” demand described above has been relatively steady as a percentage of supply for some time; and if the aforementioned Silver Institute/CRU forecast is even remotely close to the truth, industrial fabrication demand will hover around 60% of available supply for the foreseeable future, particularly if said supply is in decline.  As for demand, note the blue line below – of how the sum total of U.S. Silver Eagle, Canadian Silver Maple and Indian imports have risen from just 8% of total supply in 2009 to roughly 28% in 2014.  None of these categories are likely to decline any time soon, and given such growth, this leaves the grey line, depicting demand from all other sources to be supplied by just 12% of the global supply output or roughly 120 million ounces. 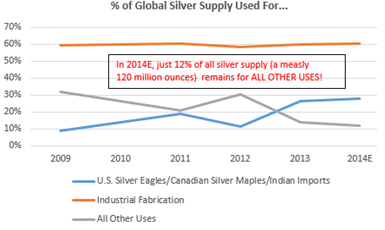 Given that essentially ZERO inventories of material size, readily available for sale, exist, our expectations of an “inevitable, upcoming silver shortage” of epic proportions has never been more powerful.  This data only bolsters our beliefs further; and thus, why anyone would not consider the purchase of even a modicum of history’s most time-proven financial insurance is beyond us.  Given the horrifying global political, economic and monetary trends, it’s just a matter of time before TPTB lose control of the silver market (and many others, for that matter).  And when they do, either you’ll have your gold and silver in hand or you won’t.