Throughout history, humanity has been plagued by the irresistible urge to accrue wealth at the expense of others.  In financial markets, this cancer has been particularly malignant; but never like today, given the advanced “tool chest” of “new age” fraudsters.  Throughout history, fiat money has caused more financial, mental and in some cases physical pain than any such tool.  However who could have conceived the damage it could cause when combined with high frequency trading algorithms, worldwide propaganda dissemination networks and a banking system that owns the government?

Fortunately, “Economic Mother Nature” cannot be defeated by such efforts; and the more she is pushed, the harder she ultimately pushes back.  Today, care of said “tools,” she has been pushed farther off the “line of scrimmage” than at any time in history.  Using other popular analogies, the proverbial “beach ball” has never been submerged further, the rubber band never stretched so far and the spring never coiled so tightly.  The laws of economic physics must eventually express themselves in financial markets; and given their aforementioned, precarious state – in which unprecedented bubbles have been fostered in stocks, bonds and all manner of tradable paper, the odds of this historic anomaly unwinding soon have never been higher.  And when it does, god help those that hitched their fortunes to the money printers, whilst shunning the only assets with proven safe haven properties; i.e. physical gold and silver.

There are so many things to talk about, but literally, as I was about to start typing one of the most wildly PM-bullish, dollar-bearish news headlines of our lifetimes hit the tape – validating everything we have warned of.  I’m sure Bill Holter will expand on this topic further – as its “right up his alley”; but suffice to say, if one of the world’s largest energy exporters is formally “de-dollarizing” a dangerous anti-dollar precedent will be set.  It’s only a matter of time before the biggest “petrodollar asset” itself – Saudi Aramco – declares a similar intention.  And when it does, no amount of money printing, market manipulation and propaganda will be able to repair such a catastrophic blow to U.S. hegemony.  Recall, last weekend Jim Sinclair predicted a major challenge to dollar hegemony this Fall; and if he’s right, we may well see significant crippling – if not outright collapse – of the U.S. government led “gold Cartel.”

Okay back to the “beach ball” thing – starting with the global economy.  Sure, I could discuss the world’s other major economies – like China, Japan and the Euro Zone.  However, outside the historic property bubble fostered by the UK’s own printing presses, essentially all major economies are stagnating at best and freefalling at worst.  No one even disputes the ongoing collapse of China’s unprecedented real estate/construction/housing bubble as illustrated by a 17% plunge in Chinese copper imports in May alone.  And as for Japan, the post-sales tax environment may well prove the final nail in the coffin for the “Land of the Setting Sun.”  Europe’s economy rose by a whopping 0.1%, 0.2%, and 0.2%, respectively, in the last three quarters; and in recent months, data from Europe’s “strongest” economy – Germany – has been in freefall.  That’s why “Goldman Mario” was forced to finally act on his promise to do “whatever it takes” to save the Euro – such as last month’s decision to institute negative interest rates whilst preparing a broad QE program to be launched in the coming months.

And then there’s the United States of Data Fraud where apparently the historic collapse in the Baltic Dry Index is somehow immune.  Yes, as this key metric of global trade plunged 50% in the past three months, we’re emphatically told by the “evil troika” of Washington, Wall Street and the MSM that the economy is rapidly “recovering.”  That is if you believe the assortment of fraudulent “diffusion indices” and myriad other “adjusted” data proclaiming surging business activity, plunging inflation and lollipops and unicorns as far as the eye can see.

The only problem, of course, is said “data” doesn’t have the slightest correlation to actual economic activity – as exemplified by the ultimate data travesty proclaiming the “unemployment rate” is plunging whilst actual labor participation hits a 35-year low.  And FYI, note how said disparity, like so many other things in today’s fraudulent world accelerated at precisely the “point of no return” era we recently wrote of i.e. late 2011 when TPTB realized, once and for all that “QE to Infinity” was guaranteed. 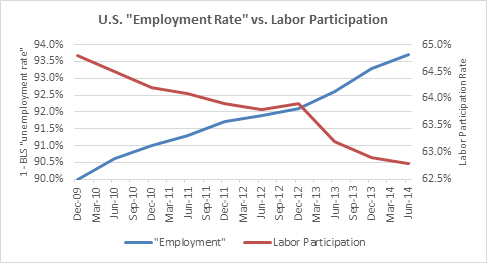 As for said “diffusion indices,” we find it remarkable that despite “surging” in recent months, the key employment category never seems to budge.  And per yesterday’s jump in the PMI Services diffusion index – published by the newly IPO’d “Markit” Financial Services (there can’t possibly be a conflict of interest here); we’re to believe the “service economy” is exploding, despite a plunge in the business expectations component from 79.3 to 75.9.  Yes, the economy is “exploding” with “orders” and “deliveries” up sharply.  The only problem is who’s buying them, and who are they being delivered to?  To wit, we know channel stuffing activities are at all-time highs – particularly in the nation’s largest subprime financed recall-plagued company; and we also know retail sales are at lows not experienced since the 2008-09 financial crisis.

Again, it doesn’t take a “rocket scientist” to realize such data are flat out lies.  According to Zero Hedge, the recent “Markit” diffusion indices indicate up to 6% GDP growth in the second quarter demonstrating just how wildly off base they are.  Even Wall Street criminals like Goldman Sachs are only forecasting 4%.  More importantly, take a gander at the chart we’ve compiled below of real economic data in the first two months of the second quarter – which at best, indicates stagnant activity.  Sure, bidding frenzies have erupted for $1+ million properties financed by freshly printed cash handed to “the 1%”; but otherwise, as exemplified by Zero Hedge’s article this morning – “Please Help Us Find The 2Q Spending Surge” – we fail to see why anyone would believe the U.S. economy is “surging;” let alone, growing at all. 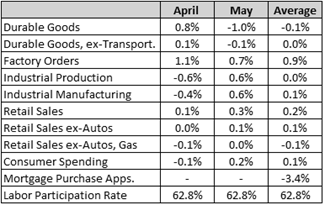 Heck, if the Fed used its own inflation gauge – i.e., the comically understated “PCE deflator” – GDP “growth” would have been far worse than reported and far weaker going forward.  To wit, it just hit a 19-month high of 1.8% – as of course, it cannot be allowed to rise above the Fed’s so-called 2.0% “target” despite gasoline and food prices rising 10% in the past six months alone.  Yes, as the U.S. cost of living indisputably sits at its all-time high, the BLS decided to use an all-time low “GDP deflator” of just 1.3% in the first quarter!

Of course, said beach ball is not just at “record depths” when it comes to economic data, but financial markets as well.  Frankly, it’s hard to believe we have surpassed most valuation and leverage highs of the insane internet bubble era; let alone, the equally ludicrous mid-2000s real estate bubble.  However, we decidedly have – although this time, it’s not the public participating, but “the 1%” receiving free Fed cash, favorable tax treatment, and unprecedented “crony capitalism.”  Conversely, the opposite goes for the precious metals “anti-bubble” – where prices have been forced to unimaginable lows, well below the cost of production amidst historically bullish fundamentals.

To wit, we learned yesterday that 2013 physical deliveries from the Shanghai Gold Exchange exceeded 2,000 tonnes atop more than 1,000 tonnes of PHYSICAL imports into Hong Kong.  Combined this amount exceeds the entire world’s production of roughly 2,900 tonnes; and yet, we’re to believe “freely-traded” prices plunged from $1,700/oz. to $1,200/oz. during this period.  Moreover, with both Indian silver imports and U.S. Mint silver Eagle sales hitting all-time highs in 2013, somehow we’re supposed to believe “freely-traded” prices fell from $30 to $19?

As for said “paper trading,” the pre-eminent COMEX expert – Harvey Organ – recently proclaimed the data to be so ridiculous it’s no longer worth watching.  Which is what we’ve said all along as for as long as we have watched they have screamed fraud.  I mean how can so-called “commercials” hold concentrated short positions over the entirety of a 14-year bull market, and “inventory” of less than $1 billion not be taken out by the world’s 1,650 individual billionaires, thousands of “institutional billionaires,” and dozens of gold-starved trillionaire” central banks? You know, like the Germans who only received a measly five tonnes of the 300 they requested from the New York Fed 18 months ago?

I mean, how many times can the entire world watch gold capped at the 8:20 AM EST COMEX open and the 12:00 PM EST “cap of last resort” – as they did yesterday after the horrific GDP print, via prototypical “cartel herald” algorithm, at comically transparent “lines in the sand” like the current $1,320/oz.?  Not to mention on COMEX options expirations days as was the case yesterday?

To that end, how many times must we watch “2:15 AM” EST raids at the open of fraudulent London paper trading (90% of all trading days in the past year); or “key attack time #1” attacks at the 10:00 AM EST close of the global physical markets – such as today, amidst plunging stocks and Treasury yields – in the latter case, illustrating the “most damning proof yet of QE failure.”

And how many “dead ringer” algorithms of the “Dow Jones Propaganda Average” will we witness – such as yesterday, whilst gold was suppressed via prototypical DLITG or “Don’t Let it Turn Green” algorithms – before the entire world calls the U.S. government’s bluff?  Clearly, the Russian are pushing this agenda now; and if Jim Sinclair is right, many others will join them by year-end. 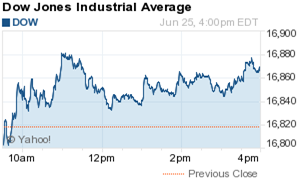 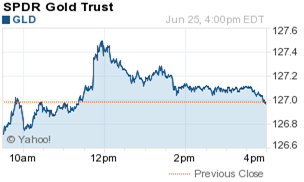 We won’t prognosticate if his timing is right, but certainly the inevitability of his expectations.  “QE to Infinity” is here to stay on a global scale and the “final currency war” won’t end until all fiat currencies (which is to say, all currencies) are destroyed.  Perhaps, a “black swan” event like Iraq will be the catalyst; but perhaps, it will simply collapse of its own weight, given these unprecedented distortions and this unprecedented debt accumulation.

A global financial time bomb is ticking; and contrary to said propaganda, not only is the U.S. not “leading” the world economy, but is in the worst financial shape of any nation.  It won’t be long before the music stops; and if you haven’t already protected yourself with precious metals when it does, your fight for financial survival will be unlike any challenge your generation – or those preceding it – has ever faced. 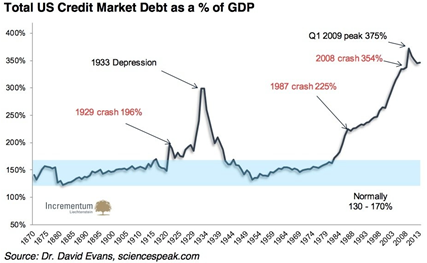 And hopefully, if you do make the wise decision to insure yourself from this inevitability – which just may be imminent – we hope you’ll call Miles Franklin at 800-822-8080, and give us a chance to earn your business!