For the past six months or so, as the global economic collapse has grown progressively uglier, the thing that has shocked me most has been the utter abdication of interest by Wall Street, the Mainstream Media, and even Washington’s duty to discuss it.  It’s almost as if they have been cumulatively hypnotized by the most maniacal; relentless; and now, global market manipulation operative in human history.  Or, more aptly put, “robo-algorithm history,” given just how few humans actually participate in “trading” these days.

Frankly, it’s gotten to the point that no one believes a 2008-style crash is even possible, given the unremitting use of “PPT operations” to support “last to go” markets like the “Dow Jones Propaganda Average,” Nikkei, and German DAX.  True, these three “over-observed” indices – in that their movements have had ZERO correlation (or better yet, negative correlation) to collapsing economic activity since their post-2008 “commandeering” – are down 7%, 17%, and 11%, respectively, since their highs earlier this year.  In the Dow and DAX’s case, all-time highs, at least in nominal terms.  However, care of the aforementioned, historic efforts of the Fed, Bank of Japan, and ECB – both overtly and covertly – they are all 150% higher than their February 2009 lows, making the “1%” that own the vast majority of stocks fabulously wealthy, at the expense of the “99%” that are cumulatively experiencing the hardest economic times in generations.

As for “Main Street,” the historic oversupply of the world’s largest, most important commodities; combined with record consumer, corporate, municipal, and sovereign debt; makes for as ugly an economic and financial outlook as the world has ever seen.  And no, I’m not exaggerating – as objectively speaking, no matter what metric one uses, the conclusion is the same.

To that end, the argument of whether “inflation” or “deflation” will triumph has been bastardized beyond recognition – in that 1) the definition of these terms – i.e., the rate of change of the money supply – is badly misunderstood; 2) money printing must continue to expand, as by definition fiat currency regimes are Ponzi schemes; and 3) no matter how low commodities and “want versus need” items fall in price, the global cost of living will continue to rise – often, in ways “conveniently” not captured by rigged CPI indices.  Equally important, with real wages at multi-decade lows – in the U.S., dating back to the 1970s; real employment demonstrating the same, sickly trend – the U.S. Labor Participation Rate is at a 38-year low, and an all-time low for men; the average currency at or near its all-time low – yielding massive increases in global importation costs; and worldwide debt at an all-time high – spiraling higher with each passing day; the “positive impact” of lower commodities is laughably inadequate to compensate for the negatives.  To wit, the “unspeakable horrors” that result from such economic stress – like the rapidly escalating Syrian crisis, for example.  In other words, the inexorable trend lower for worldwide economic activity – and higher for Central bank money printing – has never been more powerful, or irreversible.

That said, the all-out manipulation of “key” markets have not been able to prevent the “average” stock market from falling more than 20%; “junk” bonds, commodities, and currencies, from dramatically declining – yielding $13 trillion of real losses in the last six months alone; and equally dramatic declines in worldwide financial solvency.  And of course, physical gold and silver demand has not only rocketed higher, but put 2015 on course to shatter all previous records – amidst an unprecedented environment of collapsing inventories, surging premiums, and an historically weak production outlook.  Here at Miles Franklin, August was the second strongest month in the company’s 26-year history (the first was May 2013, following the infamous “alternative currencies destruction” paper raids).  Business has slowed somewhat since, but remains at historically elevated levels due to both the aforementioned factors and a growing, widespread realization that the “end of belief that Central banks can save us” has arrived.  However, what will really take Precious Metals demand – at least, here in the West, as opposed to the rest of the world, where the “gold bear market” ended last year – will be rising prices.  And not just from this year’s four-year lows of $1,070/oz and $14.20/oz, respectively to today’s still-pitifully suppressed $1,152/oz and $15.98/oz, but far higher levels that yield the same “greed-catalyzed” demand that propelled prices to all-time – albeit, nominal – prices of $1,920/oz and $50/oz, respectively, before the Cartel went hog-wild attacking paper prices in 2011.

To that end, the reason we spend so much time discussing the blatant – and for all and intents and purposes, proven – manipulation of financial markets is to enable readers, in performing their personal due diligence processes, to see the world for what it is, as opposed to what the “powers that be” want you to believe.  To wit, yesterday’s “peak manipulation” article, discussing not only the aforementioned abdication of MSM economic coverage, but the grossly transparent “intervention” used to stave off the same fear on “Wall Street” as is currently occurring on Main Street.

In it, for example, I highlighted the “sixth sigma” similarity of the Dow and paper silver markets last week, in advance of Friday’s catastrophic NFP report.  Well, have a gander at yesterday’s stock and silver markets in comparison; and with a straight face, tell me anything other than blatant manipulation was the cause – via the same intervention methods, such as the Precious Metal “Cartel Herald” and equity “Hail Mary” algorithms, that have been utilized for years. 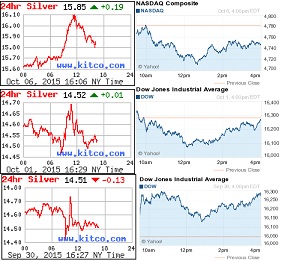 Not to mention, that Friday’s post-catastrophic – and entirely “unexpected” – NFP report result, following the aforementioned capping algorithms, yielded a GLD gain of exactly the 2.0% “upside limit” the Cartel has imposed on daily gold gains for the past two decades.  And as you can see, yesterday’s equally “unexpected” gold surge, following the execution of said “Cartel Herald,” was stopped at exactly the 1.0% limit the Cartel has managed to hold gold’s daily gains to on 99% of all trading days over since the mid-1990s.

Throw in the fact that the ubiquitous “2:15 AM” EST capping operation – using the “Cartel Herald,” of course; has been used in prototypical fashion in each of the past four days – each of which, ultimately yielded price increases by day’s end; and you can see just how obvious – not just to me, but the world at large – the Cartel has become.  I mean, talk about “sixth sigma” – as they have now capped and/or attacked prices on an incredible 117 of the past 120 Sunday nights, and 525 of the past 599 opens of the London “pre-market” session at 2:15 AM.   And in true “peak manipulation” form – today’s facetious Zero Hedge headline reads “stock futures jump on Bank of Japan disappointment (they didn’t expand Abenomics further), and weak earnings.”  And my god, look at what they just did to paper gold and silver as I write, with no other market budging, and now material news of anytime!  In other words, simply trying to stall gold and silver’s post-FOMC gains, at their now blatantly obvious short-term “lines in the sand” at the round numbers of $1,150/oz and $16/oz, respectively.

Before I go, I’d be remiss in my duty to call out gross Central banking propaganda and lies if I didn’t revisit my March 2012 article, “Bernanke the Hero” – in reference to Helicopter Ben being named Time magazine’s “Man of the Year” in 2009, and Atlantic magazine actually deeming him a “hero” in 2012, for having turned the printing presses  to “ludicrous speed,” in taking interest rates to zero and monetizing every Treasury and mortgage-backed bond not nailed down.  Let alone, handing out “secret loans” to any “TBTF” entity that would have them; executing off balance sheet “swaps” with Europe’s insolvent banking sector; and who knows what else we still don’t know about.

As the entire world knows by now, not only did such reckless actions NOT fix the problems that previous money printing madness created, but made them decidedly worse.  Throw in the aforementioned, historic wealth disparity created by handing out free money to the very culprits that caused the financial crash – whilst handing the “99%” a zero savings rate, and an unprecedented rise in its cost of living – and you can see why Bernanke (as well as Greenspan, Yellen, and all other Central bankers) is not only the opposite of a “hero,” but may well go down as one of the most destructive men in history.

That said, like “Maestro” Greenspan before him, Bennie is out in force trying to whitewash his legacy, now that a few years have passed since his departure from the Fed.  Just yesterday, he not only blamed Congress for the poor economic recovery – not that they didn’t play their own, equally destructive part; but espoused one of the biggest economic lies of all time; i.e., “there is no doubt the jobs situation is far healthier today than a few years ago.”

To be sure, it is – if you regard the aforementioned four-decade low in labor participation, real wages, and full-time “breadwinner” jobs as an improvement, by focusing solely on the concocted “unemployment rate” that uses these horrific trends to the government’s “statistical advantage.”  Clearly, Whirlybird Janet disagrees, having removed the “6.5% unemployment rate” threshold for raising the Fed Funds rate in the first month after her February 2014 succession to the Chairmanship.  And today, with said “unemployment rate” down to a post-crisis low of 5.1%, not only is the Fed Funds rate still ZERO – but at last month’s FOMC meeting, she actually espoused the possibility it will remain there forever!

When history is written, none of these “money printers from hell” will be exonerated – much less, the man who “invented QE.”  That said, here at the Miles Franklin Blog, we don’t care a whit how Bernanke is regarded in the future – as long as our readers are financially prepared for the ugly times when such articles are written.  To which we can only continue to espouse, as vehemently as possible, to PROTECT YOURSELF, and DO IT NOW!