In college, I majored in Finance, and minored in economics; and several years later, achieved the Chartered Financial Analyst designation, or CFA.  In other words, I’m one of the handfuls of Americans whose career path actually followed his university studies.  And thanks to the pure luck of my grandfather being a pharmacist at Walgreen’s – and subsequently, gifting me $1,000 of stock upon my birth in 1970 – I wasn’t forced to take out student loans.  Again, putting me at the end of the bell curve; as just this month, Federal student loans – amidst the lowest Labor Participation rate in 35 years – surpassed $1 trillion, whilst default rates surged to an all-time high.  Of course, if the Fed hadn’t been printing money with reckless abandon throughout this time – remember, the gold standard was abandoned in 1971 – such loans wouldn’t be necessary.  To wit, when I attended SUNY Albany in 1988-92, a year’s tuition was $7,000; as opposed to today’s $20,000 or $28,000 for non-NY residents.

Despite my finance background, my favorite subject was Greek Mythology.  To countless generations of Greeks, Homer’s Iliad and Odyssey resembled bibles with stories as colorful – and philosophical – as any ever written.  Over the years, I have referred to Homeric characters numerous times to describe the world’s ills; but none more so than Cassandra.  The Princess of Troy, Cassandra was said to be so beautiful, she bedeviled the mighty sun god, Apollo.  Consequently, he granted her ability to prophesize the future; but altered this “gift” when she spurned his amorous advances – causing no one to believe her prophecies.

When I worked on Wall Street – particularly, my seven years as a sell-side oilfield service analyst at Salomon Smith Barney – I had a devoted audience of mainstream analysts, portfolio managers, and at times, “gurus.”  In forecasting higher oil prices – which in 1999-2005, averaged $30/bbl. – they assumed I was anticipating increased economic activity, which is “good.”  The fact that my predictions were based nearly entirely on constricting supply and monetary inflation was largely ignored.  But then again, no one cared – as higher oil prices were considered a sign of economic strength – which again, is “good.”  Better yet, my forecasts were supported by a Cartel – i.e., OPEC – whose purpose was to overtly support oil prices.

However, when I left Wall Street in 2005 – in large part, disgusted by the conflicts of interest I was constantly exposed to; I decided to become a “whistleblower” of sorts, through the free missives I published about the real state of the economy and financial markets.  I had already been fully invested in Precious Metals for three years; and thus, was fully aware of the covert Cartel working to suppress prices; which is probably why my initial articles were published on the GATA website.

Anyhow, it was at that point that I realized my writings – no matter how thoughtful or prescient – were now considered “bad”; as essentially, I was publicly forecasting weak economic activity, falling financial markets, and a decline in the “almighty dollar.”  Even after countless correct forecasts – such as the tech and housing bubbles – much less, the PM bull market – I was largely ignored; and to this day, the worse such issues become, the greater the anathema my commentary.  And the same goes for all the “good, smart people” in our “shadow world”; including countless readers of the Miles Franklin Blog and Newsletter.  In other words, we have been deemed Cassandras by TPTB; and to a large extent, the very “proletarians” suffering under their auspices.  Remember, in a world where very few have the means to protect themselves; the majority will always opt to accept propaganda offering hope.  And if anyone harbors doubts that the vast majority require hope, I advise you to watch this sobering video about America’s widening wealth inequality.

In eleven-plus years of being fully invested in the sector – and writing of it on nearly a daily basis; one thing I have learned loud and clear is of the herd mentality that guides it.  In other words, when prices are rising, the “to the moon” crowd grows exponentially; while when prices are falling, gold’s enemies come out of the woodwork – in droves.  In fact, Precious Metals are so universally feared – and propagandized – that their detractors are typically multiples of those supporting them, even in the best of times.  This makes what we are dealing with this year so much more difficult; as aside from the typical fiat currency pied pipers, many of gold’s supposed “friends” are jumping on the bandwagon as well.  During such times, the value of physical metal in one’s own possession is best understood, as “Paper PM Investments” evaporate into the ether.  Not that the latter may not one day “outperform”; but in the meantime, knowing my ounces aren’t going anywhere enables me to sleep the “sleep of the just.”

Under such circumstances, we are witnessing ignorance of economic and financial market fundamentals at levels never before seen; not to mention, a bull market in apathy unlike any in recorded history.  To wit, the market control exhibited by overt manipulations like QE, and covert “operatives” like the President’s Working Group on Financial Markets, the Exchange Stabilization Fund, and the gold Cartel has been so powerful, it is temporarily altering perception of reality – such as that it’s normal for the Dow to rise every day at 10:15 AM EST, per what I deemed the “dead ringer” algorithm nearly two years ago.  In fact, Zero Hedge today deemed this year’s extreme market dislocations the “Death of Surprise”; as no matter what news emerges, said “manipulation operatives” support bonds and stocks, whilst suppressing “unfavorable” assets like gold and silver.  And since it’s documented that foreigners are selling stocks and bonds at rates not seen since the 2008 collapse, it’s doesn’t take rocket science to understand where such buying emanates.

In actuality, it’s simply caused by the “permanent daily market operations” – or POMO – that occur around 10:15 AM nearly every day; i.e., when the Fed injects money into the equity markets.  Here’s today’s equity trading for example; as predicted this morning by Zero Hedge, and eighteen months ago by my article, “Dow Jones Propaganda Average”… 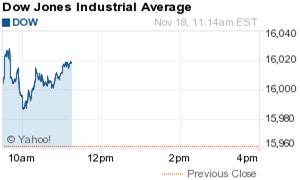 In such an environment, “news” no longer matters, like today’s unexpected decline in the NAHB Housing Index and drastic downward revision of last month’s reading – reported at 10:00 AM EST, no less.  The Fed just buys more bonds, the PPT buys more stocks, the ESF “stabilizes” currencies, and the Cartel naked shorts paper gold and silver.  It’s just that simple; and if you disagree, I suggest you read Bill Holter’s description of why such operations are deemed necessary.

Heck, just last week, Janet Yellen opined that “gold is an asset people want to hold when they are very fearful about a potential financial-market catastrophe or economic troubles and tail risks.”  Thus, do you think maybe – just maybe – in a world where manipulation of everything from LIBOR to Foreign Exchange to mortgage documentation have become commonplace, that one of the world’s smallest, but most watched markets might not be as well?  I mean, was no one watching last week when the Citibank-authored “Swaps Regulatory Improvement Act” passed through the House with nary a debate, exempting TBTF banks from Dodd-Frank regulation of their derivative trading activity?  Or for that matter, today’s Federal Reserve proposal to delay the so-called “Volcker Rule” by a full year; thus, enabling banks to continue speculating with client funds?

If you don’t believe in manipulation, than pray tell why Bitcoin – i.e., the ultimate “GOTS” currency – can surge due to ‘massive Chinese buying’; whilst gold plummets under the same conditions?  After all, even the most hardened Atlas Shrugged-type would have difficulty explaining how gold prices can fall despite physical demand in the world’s largest gold consuming nations soaring, don’t you think?  To wit, just from Hong Kong alone, Chinese imports are on pace to double last year’s record pace; while in India, where import tariffs have been raised 9% this year alone, demand will still reach a record level.  And oh yeah, that doesn’t include buying in the thriving black market, or the premiums of up to 22% currently paid above the COMEX-generated “spot price.”  Per the chart below, a whopping 82% of global gold production – which as you can see, has been flat for years – is being sucked up by these two markets alone; and who knows how much by countless other nations ravaged by Fed-exported inflation.  And yet, we’re told prices are falling because demand is “lower,” and supply “higher.” 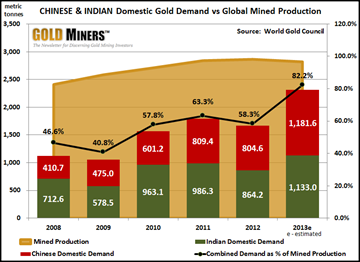 Next consider why worldwide stock prices are rising amidst essentially zero GDP growth, record unemployment, and surging debt.  You saw what I wrote yesterday about Spain, for example, which was followed up by today’s news of record bad loans.  Does it make sense that not only is the Spanish stock market up 18% this year, but entirely due to multiple expansions?  Or that U.S. equity is making (nominal) record highs amidst the abysmal economic conditions depicted below?  Perhaps it’s the record low Labor Participation rate that has “investors” juiced; as exemplified by this week’s Congressional testimony that long-term joblessness will be chronic – and subsequently, Obama’s decision to push for an extension of unemployment benefits next month.  Yes, the economy is “recovering” so strongly, that the 26 weeks of unemployment benefits paid out in 2008 has been expanded to 99 weeks in many states, with a strong likelihood of being increased further. 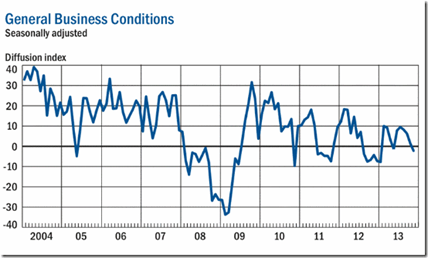 Obviously, what we are seeing is Central bank money printing being channeled principally into financial assets; simultaneously, raising the cost of living – and doing business – worldwide.  This is why the disparity between markets and economic reality is widening; such as this depiction of the past 24 hours gold trading – demonstrating a “cap of last resort” Friday afternoon at 12:00 PM EST; a “Sunday Night Sentiment” attack in ultra-thin market conditions, the 117th visit from the 2:15 AM EST suppression algo in the past 129 days, a COMEX-opening waterfall decline with no other market budging, an additional plunge at exactly “Key Attack Time #1”; i.e., 10:00 AM EST, when the global physical market closes; and a “full circle” attack again at 12:00 PM EST today – again, with no other market budging.  Just like the Dow’s POMO-inspired surges, I have written of how Paper PM prices are manipulated for years. 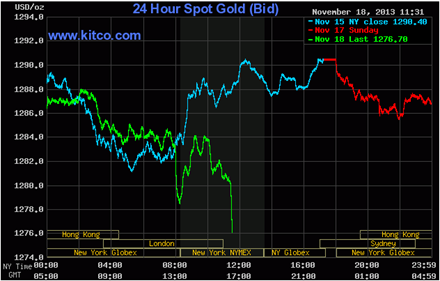 Of course, such manoeuvers have been attempted throughout history; in all cases, unsuccessfully.  The fact remains that physical demand continues to rise, whilst physical supply contracts.  And if plunging inventories at the COMEX, LBMA, and GLD ETF are any indication, it won’t be long before the Paper PM Ponzi scheme collapses under its own weight.  The fact is the aforementioned economic trends cannot – and will not – subside until real money replaces the fiat promises destroying capital at an exponential rate.  And thus, the necessity to protect one’s financial assets from the long-term, guaranteed result of hyperinflation; particularly at prices well below the global cost of production!

Even when this occurs, Cassandra’s like us will still be despised by the majority – in most cases, disregarded to the bitter end.  Fortunately, a small handful of free thinkers will see through the lies – as in time, it will become more and more difficult to ignore them.  At the Miles Franklin Blog, our goal is to speak the truth, the whole truth, and nothing but the truth; and hopefully, you will be one of the lucky few that “get it.”