Charts Even We Can Appreciate

Following the relentless paper attacks of 2013, we would have bet anything the Cartel would attempt to start 2014 “with a bang.”  After all, essentially every MSM outlet spent the New Year’s weekend crowing about gold’s “worst year since 1980” and given the raging economic “recovery” (facetious), how could PMs do anything but meet Goldman’s “slam dunk” target of $1,050/oz?  Not to mention, the myriad technicians who assume it to be a fait accompli, for no other reason than “because.”  Thus, it was quite shocking to see an “anti-Sunday night sentiment” surge; albeit, on a Thursday, rather than a Sunday.  The Cartel, of course, fought back at 2:15 AM; but lo and behold, prices surged anew when the COMEX opened, with silver actually pushing back above the Cartel’s six-week “line in the sand” at $20/oz.  BTW, we still patiently await roughly 400,000 ounces leaving the registered inventory category in the next few days; as the December contract is officially closed – and thus, the Cartel can no longer “cash settle” with those that have already demanded physical delivery.

As we’ve discussed ad nauseum, global physical demand reached record levels in 2013 – despite paper gold and silver prices “plunging” by 28% and 36%, respectively.  In fact, yet another data point was added to this mosaic this morning, as the Perth Mint reported 2013 increases of 41% and 33%, respectively, in gold and silver sales.  Last I looked, demand was supposed to fall when prices plunge; but not so here, as clearly such paper declines were due 100% to Cartel suppression, prompting frenzied physical buying.

This is why we focus on holding physical gold and silver, as opposed to “Paper PM Investments”; as not only are our ounces sitting inertly within our vaults, but silver premiums expanded in 2013, as the worldwide supply/demand balance tightened.  Conversely, the XAU and HUI mining indices declined by 49% and 55%, respectively; which frankly, were boons compared to the junior mining sector.  And don’t forget the closed-end bullion funds – which we warned of last February, when they were still trading at parity with Net Asset Value (NAV).  Due entirely to Cartel naked shorting, in our view, they ended 2013 at dramatic discounts to NAV, per the table below.  And now that even the Sprott funds (PHYS and PSLV) are trading below NAV, investors have started to withdraw actual metal; thus, putting the funds respective futures as gold and silver proxies in further doubt.  These funds are run by the finest people in the business.  However, the Cartel can naked short any paper investment into oblivion; and we assure you, they will.

To wit, we’ve made it crystal clear that technical analysis has been for the most part destroyed; as quite obviously, government-led algorithm – utilized in partnership with TBTF banks like Goldman and JP Morgan – are currently being used to manipulate markets on a 24/7 basis.  Frankly, the only remaining question is whether equity markets collapse or hyper-inflate – in the latter case, as Venezuela did last year; in both cases, yielding massive real losses.

That said Precious Metals markets are different from all others; in that underlying them are supply and demand fundamentals for actual metal.  This is why PHYSICAL sales achieved record highs in 2013, amidst surging premiums and flat (at best) production; and subsequently, why the 2014 outlook is significantly more bullish.  The more the Cartel naked shorts Paper PMs, the tighter the physical outlook gets; be it on the COMEX, the LBMA, or in India, China, Russia, or Turkey.  And thus, when viewing long-term charts, it’s difficult to not consider they may have some validity.

To that end, a remarkable article was posted to King World News this weekend – which even we were floored by.  Titled “The Most Remarkable News in the Gold and Silver Markets,” it posted several jaw dropping, multi-decade charts.  To start, we present Exhibit A; i.e., the gold price since 1978, overlaid with the coinciding MACD (Moving Average Convergence-Divergence) ratio.  Essentially, MACD measures how “overbought” or “oversold” a market has become; and in gold’s case, it is incredible to see that MACD has fallen below not only the 2008 lows, but the 1980 lows as well – by a wide margin.  Ladies and Gentleman, this is solely the result of the Cartel “overplaying its hand”; which we assure you, will have long-term, catastrophic ramifications.  And by the way, the fact that gold prices are still above $1,200/oz. should tell you all you need to know about the power of this generational bull market. 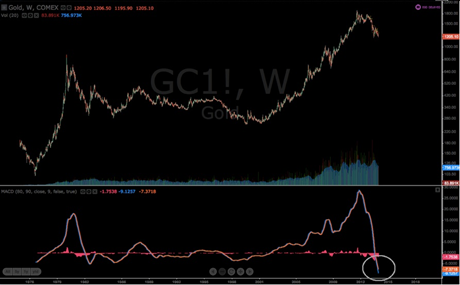 Next up, here is the same chart – for silver.  In 1980, its plunge was more dramatic than that of gold; in that case, due to overt government intervention.  To wit, when the Hunt Brothers were accused of cornering the market (which pales in comparison to what JP Morgan is doing on the short side of the market today), the government banned silver purchases, causing the price to plunge from $50/oz. to $4/oz. in just two years’ time.  Yet, today’s MACD reading – after the government suppressed silver from $50/oz. to just $19/oz. over the past two and a half years – is weaker than it was then! 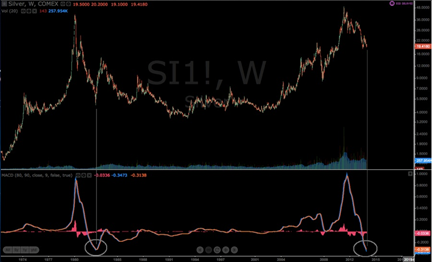 As for the mining shares, they too have been beaten down to unimaginable levels.  Frankly, the XAU’s MACD reading is so incomprehensibly low, it’s difficult to imagine a mining industry still exists.  Sadly, this is in the process of coming to fruition and frankly, there is no way of knowing if miners will rebound as smartly as gold and silver prices – let alone, if fearful governments start expropriating, nationalizing, and/or instituting windfall profit taxes in a rising price environment.  In other words, one would be advised to be very careful when considering the ramifications of this chart. 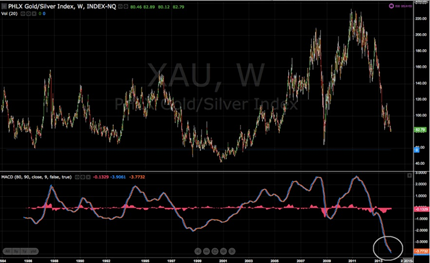 And last but not least, if there’s anyone remaining that believes stocks are rising due to anything other than money printing and market manipulation, we present the MACD reading of the S&P 500.  Yes, my friends, it is now as “overbought” as at the peak in early 2000; not to mention, dwarfing the overbought readings of mid-2008.  I’m guessing 90% of our readers were around at the onset of the “tech wreck” – when the stock market frenzy was global, widespread and all encompassing.  And thus, well aware of the mentality that prevailed.  And oh yeah, the fact that the U.S. economy was at an historically high level; along with the dollar, America’s standing in the world, and a “Pax Americana” zeitgeist featuring, for the most part, world peace. 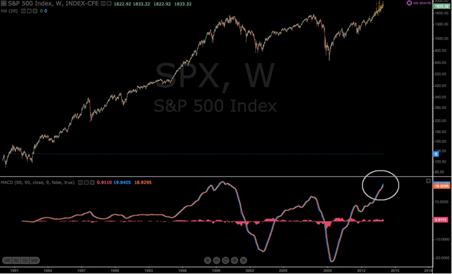 Of course, there’s one more thing that needs to be noted, when comparing stock prices then and now.  And that, of course, is the leverage utilized by financial firms – which care of the Glass-Steagall Act’s repeal in 1999, has literally gone off the charts.  This is why the 2008 financial crisis occurred; and sadly, why the next crisis (in 2014, perhaps) will be far worse.  When I consider that even I held substantial levels of margin debt in the 2000s – compared to ZERO today – it is surreal to consider NYSE margin debt last month hit an all-time high!  To boot, please take note of the nearly 100% correlation between margin debt and the S&P 500 itself; and simultaneously, consider the historical saw that “payback’s a bi–h.” Again, we cannot be more vehement in our contention that technical analysis must be taken with a “grain of salt,” given the current level (i.e., 100%) of government intervention.  However, even we can appreciate the gravity of these charts; which quite honestly, are not as surprising as one might expect, given just how far gold and silver prices (and the S&P, for that matter) have been separated from where they’d be trading based on fundamentals.

Remember, the Cartel’s Day of Reckoning must eventually arrive; as throughout history, every fiat currency has failed.  Today’s global fiat Ponzi scheme is the largest ever; and when it implodes, life as we have known it for centuries will likely change dramatically – for the worse.  Here is a quote referring to the great movie Ransom, “Is this Jimmy Shaker Day?”  In other words, will the “luck” of the manipulators – and bearish prognosticators – end today?  Or tomorrow?  We don’t have a crystal ball, and thus can’t predict the exact date.  However, as sure as death and taxes – particularly those related to Obamacare – it is coming.  And when it does, if you haven’t already protected yourself with PHYSICAL gold and silver, it will likely be too late – potentially, forever.