Tis’ the eve of yet another “most important FOMC meeting yet”; which I state in quotes, as I’m obviously being facetious.  While the financial media continues its endless prattle over whether “tapering” will commence – led, of course, by the CNBC and its 20-year ratings lows – the Fed’s fiat Ponzi scheme continues to exponentially expand.  Whether it prints $85 billion per month, or $75 billion – or $95 billion – is completely immaterial; as in the end game, the Fed remains the “sucker of last resort,” which must keep monetizing toxic mortgage bonds and cancerous Treasuries, ad infinitum.  Last month’s PBOC announcement that it no longer intends to accumulate foreign currency reserves was the Fed’s final death knell; once and for all, guaranteeing “QE to Infinity.”

As I write Tuesday morning, the benchmark 10-year Treasury yield is lurking just below 2.90%; with each minor uptick stabbing the economy like the Grim Reaper’s scythe; or better yet, Nicholas’ ropes in “The Pit and the Pendulum.”  Any attempt to stop monetizing will exacerbate the pendulum’s speed; as ultimately, it will rip the global economy to shreds – and with it, the underlying fiat currencies.  Think of the pendulum as China’s inexorable drive for domination; holding “all the cards,” including the cash, the gold, endless Treasury bonds for sale, the world’s manufacturing base, and ever-expanding trade finance agreements.  Meanwhile, the U.S. government – and gold Cartel – are the pendulum’s prey; helplessly waiting to be chopped by the pendulum’s unyielding momentum.

Said momentum is rapidly increasing, as not only has the world’s addiction to ever-increasing debt become acute, but the realization that historically low interest rates must maintain. It is becoming widely recognized particularly by the Chinese, who are acting to quickly reduce fiat currency holdings as rapidly as possible, in lieu of real items of value like gold and silver.  Regarding gold, not only have the Chinese at least doubled last year’s record import level, but they are clearly mining every last ounce of in-ground reserves, perhaps at production costs exceeding $2,000/oz.; as they prepare for the inevitable, global currency reset – after which, ‘whoever holds the gold, wins.’

At this point, worldwide interest in “getting out of the system” – as Jim Sinclair deems it – has never been higher.  However, on a percentage basis, only a “precious few” have yet acted on this impulse, particularly in the dumbed-down Western world; and thus, the Miles Franklin Blog continues its inexorable quest to educate before the time to act is gone.  Global demand for PHYSICAL gold and silver will shatter all records in 2013; which should tell you all you need to know, given how viciously “dollar-priced gold” has been attacked by the U.S. government-led Cartel.  Unfortunately (for them), attempts to crush Western sentiment have only emboldened Easterners further; particularly as the Fed’s expanded QE has inadvertently exported massive amounts of inflation overseas, prompting widespread currency collapses and accompanying fiat currency fears.  And trust me, it’s no coincidence Bitcoin has emerged from nothing to put additional pressure on TPTB’s fraudulent, dying monetary system.

To that end, I wanted to point out – yet again – that there is a gaping chasm of difference between Bitcoin the investment, and monetary platform.  Governments will no doubt attack the investment with all their might – as the PBOC, Swiss National Bank, and Eurogroup are already starting to do.  However, attempts to slow the advancement of “outside the system” monetary platforms will in time prove fruitless.  Importantly, I’m not predicting what Bitcoin, the investment, will ultimately do.  However, the fact it has become so popular is – at the least – a significant omen to the fiat currency regime.  As is the amount of mainstream advertising popping up on Zero Hedge – as its use as a “go to” news source grows exponentially.  Boeing, Verizon, Capital One, and Charles Schwab are clearly spending millions on the site; and the fact that – of all things – the Obama Administration’s re-election campaign did so as well, should tell you just how many people are interested in viewing the real news, as opposed to MSM-published PROPAGANDA.

Anyhow, the Fed will announce tomorrow afternoon (Wednesday) whether it’s time to start tapering; or alternatively, if they’ll “kick the can” yet again.  Bennie made it quite clear last month that he wants to wait; as frankly, the last thing he wants is to end an eight-year tightrope act by falling off the wire on his last step.  Janet Yellen parroted this sentiment at last month’s Senate confirmation hearing; as nothing would prove more debilitating than an economy-killing interest rate spike before she even takes office.  In other words, the Fed doesn’t want to change gears, but feels pressure to validate the stock and housing bubbles its reckless policy inadvertently created.

In the end, it’s a toss-up between doing nothing, and something immaterial; which frankly, is a matter of semantics.  However, what’s decidedly not semantic is the catastrophic ramifications of allowing rates to rise – as the below, damning chart suggests.  Remember, the BEA itself credited the ‘housing industry’ with more than 50% of 1H GDP growth; and as you can see, the second the dreaded “t word” was first suggested in June, mortgage applications plunged an incredible 60%, to levels not seen in a decade.

Keep in mind; this occurred amidst the benchmark 10-year Treasury yield simply rising from its all-time, Fed-induced low of 1.4% to today’s 2.9%.  You’d think rates spiked a la 1980; but no, such carnage was simply caused by an infinitesimal blip from this Spring’s all-time lows.  If the Fed wants to accelerate the pendulum’s speed, per the aforementioned analogy, they’re welcome to “taper.”  But trust me, they know what they’re up against; and if they are foolish enough to give up themselves tomorrow, you can bet they’ll be ready to reverse the decision in a flash.

Anyhow, today’s article title emanates from Bennie putting his foot in his mouth yet again; in this case, ironically, at an event celebrating the Fed’s bicentennial anniversary.  Yes, the anniversary of the destruction of the very dollar the Fed was created to protect; which even by the government’s “massaged” CPI statistics, has lost 98% of its value since the scantily attended Christmas Eve vote that ratified the Fed 100 years ago. 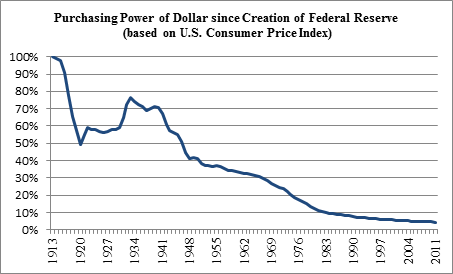 Ultimately, the legitimacy of our policies rests on the understanding and support of the broader American public, whose interests we are working to serve.  For this reason, we must continue to emphasize two other essential values – transparency and accountability.

Which is quite ironic, given the vast majority of Americans have not a clue what the Fed does; whilst everyone feels the pain of a society in which “the 1%” own everything, while the “99%” are oppressed by ever-increasing, unyielding inflation.

I mean, can you imagine the gall of this ivory tower failure claiming the Fed’s strong suit has been communication; let alone, that it could receive “support of the broader American public?”  No entity is more despised globally; and in time, even comatose, reality-show addicted Americans will realize, too, that the Fed is not only the cause of its problems, but in fact, the nation’s mortal enemy.  Even a government agency would have difficulty screwing up so royally; but then again, to the private banks that own it, inflation is exactly what they seek.  Only financial assets benefit from Fed-induced inflation – temporarily, that is – whilst the broader economy, in time, is decimated.  Financial serfdom is the net result for the unwitting “99%”; and as for their kids and grandkids, hope is something they may never experience.

Sadly, the “sheeple” are not the only brainwashed segment of society; as, just as in Atlas Shrugged, those pulling the strings tend to be caught up in the hype as well.  Nothing corrupts more than absolute power; and thus, the fact that most Fed governors think they are doing the right thing is what scares me most.  James Turk summed up the tragedy of the Fed below, which couldn’t be more spot on.

Maybe the central planners think they are doing the right thing, just like medieval doctors in the Dark Ages thought a person’s health would improve by attaching leeches to suck out the person’s bad blood.

To conclude, if there was any lingering doubt that the Fed has a clue what it’s doing – or, for that matter, the value of its communication skills – here are some gems from the Ghosts of Chairman’s Past, and Present…

The U.S. government has a technology, called a printing press (or today, its electronic equivalent), that allows it to produce as many U.S. dollars as it wishes at no cost.

We’ve never had a decline in house prices on a nationwide basis. So, what I think is more likely is house prices will slow, slowing consumption spending a bit. But I don’t think it’s going to drive the economy too far from its full employment path.

With respect to their safety, derivatives, for the most part, are traded among very sophisticated financial institutions and individuals who have considerable incentive to understand them and to use them properly.
Ben Bernanke – November 2005

Housing markets are cooling a bit. Our expectation is that the decline in activity or the slowing in activity will be moderate, that house prices will probably continue to rise.
Ben Bernanke – February 2006

I don’t think that Chinese ownership of U.S. assets is so large as to put our country at risk economically.
Ben Bernanke – February 2006

If current trends continue, the typical U.S. worker will be considerably more productive several decades from now. Thus, one might argue that letting future generations bear the burden of population aging is appropriate, as they will likely be richer than we are even taking that burden into account.
Ben Bernanke – October 2006

At this juncture, however, the impact on the broader economy and financial markets of the problems in the subprime market seems likely to be contained. In particular, mortgages to prime borrowers and fixed-rate mortgages to all classes of borrowers continue to perform well, with low rates of delinquency.
Ben Bernanke – March 2007

It is not the responsibility of the Federal Reserve – nor would it be appropriate – to protect lenders and investors from the consequences of their financial decisions.
Ben Bernanke – October 2007

To sum up the story on the GDP outlook for the real GDP growth, my own view is that, under the monetary policy, the economy is likely to achieve a relatively smooth adjustment path, with real GDP growth gradually returning to its roughly 2½ percent trend over the next year or so, and the unemployment rate rising only very gradually to just above its 4¾ percent sustainable level.

The Federal Reserve is currently not forecasting a recession.

For my own part, I did not see and did not appreciate what the risks were with securitization, the credit ratings agencies, the shadow banking system, the S.I.V.’s – I didn’t see any of that coming until it happened.

You want more, you say?  Well there’s plenty where that came from, here.  By the way, does anyone still believe the future of the dollar is up, and of Precious Metals, down?