Could This Really Happen? Yes But, "Not Here Syndrome."

Canary In the Yen Shaft: $10 trillion JGBs; No Bids!

Japan actually had a 36 hour period of time this past week where no long term treasury securities traded privately.  I have a couple of questions about this.  1.  Could this really happen?  2. What does this mean?  Of course there are other questions like why did this happen?

Think about this, Japan is the 3rd largest economy in the world and their bond market is the 2nd largest only behind the U.S.  How could there be no trades, none, zero, and nada?!  But this did apparently happen.  It happened because there were no bids, none.  It happened because their “QE” has driven interest rates too low, so low that no one (except of course the Bank of Japan) wants to purchase these bonds.  Please understand that “liquidity” is the name of the game when it comes to bond markets.  If there is no liquidity it usually means that there is no “exit door,” in this case the Bank of Japan apparently is the ONLY exit door as they are pretty much buyers of any and all securities that are offered for sale.

“Why” are there no buyers?  From a common sense standpoint, who in their right mind would lock up money for .6% per year for 10 years (in anything)?  Who would put their capital into something with such a low yield when the central bank’s stated goal is to raise inflation far above this .6% and are printing Yen even more furiously than the Fed is printing dollars to attain this goal?

Let me ask you this, if there was no central bank to purchase these bonds and no one in the private sector was willing to buy…how would the government of Japan open their doors for business tomorrow morning?  The answer of course is “they couldn’t.”  This event was apparently no big deal though, the markets didn’t react, CNBC never told us about it and we didn’t even hear Jim Cramer screaming “they know nothing!”  So, no big deal right?

Well actually I think it really was a big deal.  I believe this because similar to Toto pulling back the curtain in the Wizard of Oz, investors, whether they were (are) paying attention or not got to see something very very horrific.  What did they see you ask?  They got to see the future!  Actually, they got to see “Mother Nature” at work while snickering just a little.  “Official policy” has caused interest rates to drop (be pushed) to levels where investors have no interest (pun intended).  As a humorous side note, maybe the Bank of Japan should push bond yields all the way down to a negative 10%?  If they did this they could clean up their entire bond market and be debt free in 10 years right?

Please understand that this 36 hour window occurrence is scary for other reasons also.  It displayed the fact that markets are not just “massaged” or “guided” any more, in this case they have been pushed so far as to lock out ALL liquidity.  Let’s think about this from another angle.  Isn’t this what is happening in the gold and silver markets?  Prices have been pushed down so far that buyers just cannot get enough at these prices…and the mining industry cannot supply it if they are selling at a loss to production costs.  Of course, the mines can make up for their losses by increasing unit sales (my attempt at sarcasm) but finite metal in the ground does pose a small problem.

Now, let’s look at this 36 hour period in a similar vein as a “bank holiday.”  The 36 hours passed and there is no panic, there is no “re set” and there is no repercussions right?  This is because the Bank of Japan can just keep on printing away and buying Japanese sovereign bonds.  But, there truly are repercussions whether seen or unseen.  What is the BOJ doing to their own balance sheet?  What are these bonds actually worth if no investors at all want to buy them?  Surely not “zero” (yet) but the answer to the question is “they are worth less.”

I wanted to point this 36 hour period out to you to get you to think to yourself “what if this was to occur in the U.S.?”  Or better yet, what would happen if there was a 36 hour period where no one “offered” gold or silver?  Would the metals markets open up at the same prices?  Would all of a sudden massive tonnage show up for sale?  Or would there be huge bids?  Bids that otherwise would not have been made except for the fact that humans always want something that they cannot have?  The Japanese 36 hour window is nothing more than the reverse of Reg Howe’s “go to bed with $1,500 gold and wake up with $4,000 bid…none offered.”

Yes I know “this cannot happen here” right?  Well, a lot of things “can’t happen” but they already have.  Speaking of the “it can’t happen here syndrome,” Ukraine’s currency has dropped 70% versus gold in 4 months Ukraine Currency Collapses Nearly 70% Against Gold In 4 Months | Max Keiser

Please do not make the mistake and believe that this can never happen to the dollar…because it mathematically will at some point!

I will leave you with a chart of something that also could not happen because “the government wouldn’t let it” nor would they “ever do it”…but it did, they did and it all was done because THEY HAD TO! 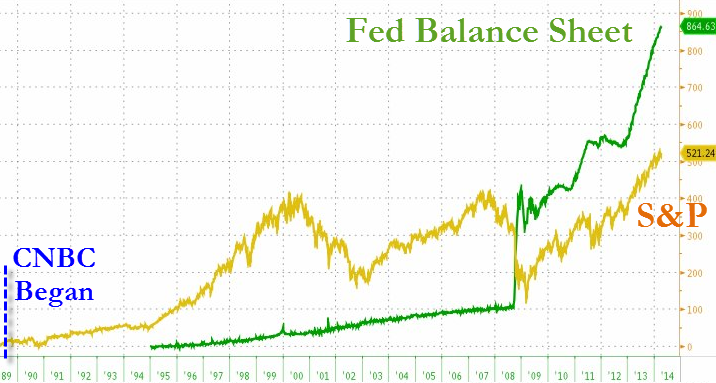 By the way, do you see the “green line” that portrays the balance sheet of the Fed?  In my opinion it might as well be a chart of gold itself (or an inverse chart of the dollar itself) but that’s a whole ‘nother topic in itself.