OK, so how about that for a headline?  And no, we’re not exaggerating as the charge toward global depression, war and hyperinflation is exploding out of control, like terrified wildebeest pursued by a den of lions.  We wrote last week that the only difference between 2008 and today – aside from tens of trillions of debt and historic geopolitical tensions – was the PPT’s ability to manipulate equity markets higher.  However, “Economic Mother Nature” is decidedly asserting herself; and consequently, TPTB are massively losing control of paper financial markets.  Eventually, the physical gold and silver markets will be liberated as well, ending the Cartel’s disgusting, 15-year masking of reality.  And with just $50 million of silver inventory on the Shanghai exchange, and U.S. Mint sales on pace for one of their best months ever, it’s just a matter of time before the Financial System’s Achilles Heel destroys it – permanently.  Now, more than ever, it appears “it” has commenced – i.e., the “Big One.”

Frankly, we could write entire articles on no less than a dozen “horrible headlines” this morning, including…

However, we don’t have time – so suffice to say, this morning’s burgeoning global market crash may well constitute the beginning of what could be a very, very rapid end.  The U.S. 10-year yield closed last night at 2.21%; but as I write, is down to an astounding 1.93%, in perhaps its largest daily move ever – en route first to ZERO, and subsequently INFINITY, when the upcoming imminent (yes, I said imminent) announcement of QE’s 4, 5 and 6 emerges.  Frankly, if the PPT can’t pull a rabbit out of its hat and “save” the world with unprecedented market manipulation, we think it likely the Fed will not only cancel the “taper” at its October 29th meeting but hint at reversing it entirely.

If we really get a sustained, disinflationary forecast … then I think moving back to additional asset purchases should be something we should seriously consider.

In other words, the “countdown to the Yellen reversal” has commenced”; and if it occurs this Fall, we may well see the long-awaited collapse of the gold Cartel.

This morning, WTI crude prices are down another $1+ to $81/bbl., whilst Brent Crude has plunged to $84/bbl.  The carnage on energy industry equities is catastrophic, as all energy-related sectors have broken down to multi-year lows, portending a horrific 2008-style crash.

The desperate financial media will likely trot out headlines about “relief for the consumer”; but in vain, as not only is no one listening but the negatives of plunging oil prices so dramatically outpace the positives, it is all but comical.  It’s like saying that due to Ebola, consumers will benefit from the lack of traffic to the airports!  Frankly, the impact on global economies and politics from such an economic catastrophe will dwarf those of the 2001-02 and 2008-09 oil prices plunges, given the massive increase in sovereign debt, surging costs of production, and heightened geopolitical tensions in “hotspots” like the Middle East and Ukraine.  The fact that this morning, amidst a crashing ruble, Russian Prime Minister Medvedev said a restoration of U.S.-Russian relations was “impossible” says it all, as the global age of “de-dollarization” explodes.

Overseas, $80 crude puts the budgets of essentially all major oil producers underwater from Iran to Russia to even Saudi Arabia.  OPEC, which back in my energy analyst days of 1995-2005 was all-powerful, can no longer support prices.  And thus, as what we expect to be a far greater economic cataclysm than 2008 unfolds, it would not be surprising to see oil prices fall to $30-$40/bbl. again – as global economic activity utterly implodes.  Frankly, it is difficult to envision a scenario where the resultant geopolitical tension does NOT catalyze war – and hopefully not World War III. 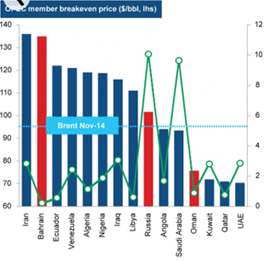 But even uglier is the impact collapsing oil prices will have on the “last bastion” of illusory American success – the shale oil bubble that will surely collapse in short order.  On average, it is estimated that shale oil’s marginal cost of production is $85/bbl.  However, as we learned earlier this year, when the nation’s largest shale field had 96% of its reserves erased, the economics of this rapidly depleting resource are far uglier than the propaganda will have you believe – and the finances of venture capital financed “juniors” horrific, as their balance sheets were piled up with high-yield debt.  Eighteen months ago, I wrote of the “unending energy independence hype” I experienced first-hand as an energy analyst – and from everything I’ve read, shale is no different.  In other words, just as the first “pillar” of the “recovery” propaganda, housing, was decidedly broken this summer – the second, energy, is dead now too.

Only time will tell if TPTB can even slow the global economic and financial market collapse; and certainly, they can’t stop it.  If ever there was a time to heed the warnings the Miles Franklin Blog have proffered all these years, it’s NOW.  The window to PROTECT your assets from the inevitable hyperinflation that collapsing economies and currencies will cause is rapidly closing – as when the scant amount of actual metal runs out – as it did in varying degrees in 2008, 2011, and 2013 – you may never get another chance to procure it.