End of the Gold “Bear Market”

The beauty of the Miles Franklin blog is one never knows how it might start.  In fact, I often don’t know myself, until I sit down and start typing.  Moreover, now that the world is rapidly devolving to 2008-style crisis mode, there are so many “horrible headlines” to address, it sometimes becomes difficult to determine what’s most urgent.

To that end, you probably expected me to start with this week’s horrifying, expanding oil price crash; which, quite obviously, has jumped to the “head of the list” of potential black swan candidates.  In other words, the odds that six years of can-kicking will be overwhelmed by the collapse of the high-cost energy production bubble appear higher than all other issues – at least for now.  And have no worry, I’ll get to it momentarily.

However, another topic has just as much potential to destroy “history’s greatest fraud” in short order; but if it does, it would be difficult to deem it a “black swan,” as it has been lurking “in plain sight” for nearly four years.  Which is, of course, this month’s Greek “snap elections” – which per the below passage from our April 2013 article, “Greek Tragedy” could catalyze all-out destruction of the Euro, irrespective of Draghi’s promise to do “whatever it takes.”

The majority of Greek citizens would likely vote for “Grexit” (i.e, Greek secession from the Eurozone and Euro currency) if a referendum were held today.

In fact, that quote was gleaned from a September 2012 article, just as Draghi was making the aforementioned infamous “whatever it takes” speech.  Of course, those were the “good old days” compared to today; as by all objective measures, Greece’s economic and social backdrop has dramatically weakened.  Thus, the most likely outcome of the “snap election” process – commencing Wednesday, but incorporating three separate votes, the most important of which occurs December 29th; is the “anti-austerity” Syriza party achieving its goal of dissolving Parliament, yielding comprehensive 2015 elections that would likely put them in power.  And as we wrote earlier this week, “anti-austerity” is a euphemism for “pro-default” and “anti-Euro.”  In other words, the reason the Greek stock market plunged 20% in the past three days, and the Greek bond market nearly 30% is anticipation of an imminent “Grexit.”

However, what really gets my goat is this article – of how the Vampire Squid itself, Goldman Sachs is “warning” Greeks of the potential for a “Cyprus-style” prolonged bank holiday if they “vote wrong.”  In other words, Goldman is playing its role as protector of the fiat Ponzi scheme it helped to create; in this case, particularly intimately, as it was their own accounting chicanery that enabled Greece’s debt to explode to unsustainable levels over the past decade.  To us, such propaganda rings eerily similar to last month’s rhetoric from the modern-day “Lady Macbeth” herself – Thomas Jordan of the Swiss National Bank – in “protesting too much” the evils of linking the Swiss Franc to gold.  Only this time around, it will fall on deaf ears; as unlike Switzerland, where a wealthy population of stock holders were led to believe the record-high Zurich stock market would crash if the referendum passed, Greece is one of the most impoverished “first world” nations, with a stock market down 82% from its September 2007 highs – and 38% this year alone!

Adding insult to injury, European banks are enormous swaths of Greece’s €400+ billion of sovereign debt, putting the entire European monetary system at risk.  And thus, given that French banks have the most exposure to Greek debt, does it surprise anyone that Fitch downgraded France yesterday (Friday) afternoon from AA+ to AA?

As for the oil price crash, what more can we say except “2008 is back, with one temporary exception?”  And even that “exception” – of PPT-supported stock markets – is becoming decidedly less exceptional; certainly in Greece and major energy-producing nations – and even the U.S., where following Friday’s bloodbath, the Russell 2000 is down for the year.  Objectively, it’s pretty safe to say global stock markets have rarely, if ever been more overvalued; and now that the economy is in freefall, there’s no telling how “undervalued” they might become.

Incredibly, $550 billion of “high-yield” (read junk) bonds and “leveraged loans” lie beneath the quicksand foundation of the U.S. shale oil industry – in our view, catalyzed by six years of unprecedented Federal Reserve monetary policy.  At Friday’s closing WTI crude price of $57.50/bbl., it’s estimated that less than 20% of all shale plays are economic – and likely, once sunk costs are factored in, less yet.  Even the International Energy Agency knows it’s “game over” for the global economy, in averring that “oil price drops are sometimes described of as a tax cut and boon for the economy – but this time round, their stimulus effect may be modest.”

“Modest” indeed, as when all is said and done, our thesis that “2015 shale oil equals 2008 subprime mortgages” may, if anything, understate the carnage.  And worse yet, this time around it’s not principally an American phenomenon, but one encompassing all high-cost oil production.  Thus, when considering that just days from now, with sovereign bond yields crashing; “inflation expectations” down to 2008 lows; and the potentially devastating Greek elections; the fact that anyone believes the Fed will espouse “hawkishness” is beyond us.  Heck, an incredible 80% of S&P 500 companies reduced their earnings guidance in the third quarter; and that was before oil prices plunged 25%, which will substantially reduce employment and earnings expectations in the sector accounting for a third of all U.S. capital expenditures.

Japan, too, faces “snap elections” this weekend – amidst Shinzo Abe’s record low approval ratings.  But don’t worry, Abenomics lovers – as like the Swiss, Japanese investors have been “threatened” with falling stock markets if they don’t solidify Abe’s mandate – which I’m sure they’ll kowtow to, guaranteed hyperinflation notwithstanding.

Moreover, I don’t have time to discuss the ugly nation-destroying “Cromnibus” spending bill – which not only puts American taxpayers on the hook for hundreds of trillions of inevitable derivative failures, but was literally written by Wall Street.  Or Austria joining the ranks of nations considering repatriation of the “barbarous relic” that is their overseas-held gold reserves.  Or Andrew Maguire claiming “the paper and physical gold markets have fully broken apart…irreversibly.”  Or the U.S. “economic lie machine” having the gall to publish the highest “consumer confidence” report in eight years – whilst not only U.S., but global economic activity and equity markets plunge.  Or despite yesterday’s ugly market results, the fact that the blatant rigging of Wednesday’s trading activity – as described in Wednesday afternoon’s “desperation tutorial” – didn’t hold a candle to that of Thursday’s rigging; which, in turn, was dwarfed by Friday’s.  Gold and silver DLITG – or “Don’t Let it Turn Green” algorithms, anyone?

I’ll eventually address all these topics in greater detail – assuming other more urgent ones don’t displace them.  However, in the meantime, I want to focus on the end of the gold “bear market” – which I put in quotes, as global physical demand is at an all-time high, and the only reason prices have declined is unprecedented, illegal naked shorting by a Cartel desperate to maintain a dying status quo.  By now, it should be crystal clear they’d sell their mothers to kick the can one last mile; and thankfully, that can has finally reached “the wall.”

Here in the States, where the collapsing global economy has yielded a liquidity surge to the zombified dollar, even history’s most vicious paper raids have not been able to push gold down.  To that point, as of Friday afternoon, dollar-priced gold was up 1% for the year, having bounced off the “quadruple-bottom” level of roughly $1,180/oz.  Reading the MSM or Wall Street research reports, one would believe gold was not only down, but miserably so.  However, its 1% gain is barely below the 4% gain of the perpetually green “Dow Jones Propaganda Average” – and above the Russell 2000’s 1% loss.  By the way, the average mining stock is down 20%-30% – but hey, how much more vehemently can we warn you of the dangers of “paper PM investments?”

Back to gold, we have for years written of how more than 95% of the world’s population views gold in currencies other than the U.S. dollar.  And thus, when gauging gold’s progress, it’s important to do so through the eyes of the world’s 7.2 billion denizens – as opposed to just 300 million Americans.  As you can see below, gold is not only higher in nearly all currencies this year, but in many cases, significantly so.  The weighted average gold change of nations encompassing 75% of the world’s population is a positive 5% – with only one nation, Pakistan, in the red at all.  And no, that’s not a typo; as Russian Ruble priced gold is in fact up 79% year-to-date – as you can imagine, to an all-time high. 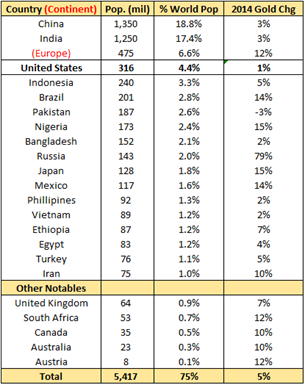 In other words, the three-year Cartel orchestrated “bear market” representing its final desperate attempt to kick the fiat can is OVER.  And given gold’s unique price inelasticity – i.e., demand increases with price – the odds of rapidly increasing demand from levels already at an all-time high have never been higher. Trust us, you do not want to live through what Russians are dealing with now.  However, the odds are you will – at least, to some extent.  And thus, the time is NOW to protect yourself in kind.