Finally, The Long Awaited “Commercial Signal Failure” is Nigh!

Following Wednesday’s all-out Fed capitulation – that not only are no “rate hikes” in the offing, but likely, never will be (LOL, Peter Schiff said “an alien invasion is more likely than a July rate hike”), I taped a MUST LISTEN audioblog titled “it’s official, Central banks are dead.”  As validated by St. Louis Fed President James Bullard’s stunning admission Thursday – yes, the same James Bullard who less than three months ago, said the next rate hike “may not be far off” – that the Fed’s “updated rate path” is “essentially flat over the forecast horizon.”  And that…drumroll please…he now anticipates just one rate hike, to a terminal point of 0.62%, by the end of 2018!  If you ask me, even that uber-dovish view overstates what will actually occur, given that money market odds now put a negative Fed Funds rate in 2017 at more than 50%.

Yes, the Fed has finally reached the point of complete impotence, irrelevance, and universally understood cluelessness.  Consequently, not only will “fighting” it become standard practice, but mocking a pastime of professional and “ordinary” investors alike.  Starting with this Tuesday, when Janet Yellen’s semi-annual Humphrey-Hawkins testimony will be completely ignored.  I mean, if you think Helicopter Ben was “gold’s best friend” back in 2011 – before the government went all-in the gold suppression trade, buying themselves the last four-years of “can-kicking” they’ll ever have – wait until you see what Whirlybird Janet does for gold, every time she opens her mouth, from now until she is unceremoniously replaced by Donald Trump in 2018.

As for Jim Rickards’ “call of a lifetime” Tuesday night, that the FOMC statement would be the catalyst for gold’s breach of May’s $1,303 high – en route to his ultimate price target of $10,000/oz, which in my view vastly understates the future reality of unprecedented gold scarcity, and hyperinflating dollars – he could not have been more dead on.  Sure, the Cartel attacked with the “dumbest, most desperate manipulation excuse ever” on Wednesday – i.e., that the death of BrEmain-supporting MP Jo Cox was somehow “gold-bearish.”  However, after yesterday’s desperate attempt (I’m writing this Saturday morning) to follow up Thursday’s orchestrated “waterfall decline,” PMs roared back late yesterday afternoon; which typically, never happens on a Friday, and double-never after a significant Cartel raid.  In fact, only some fancy tightrope walking in the ultra-thin “after market” prevented gold from closing the week above $1,300.  A level, in my view, that will be nearly impossible to defend next week, between the uber-dovish testimony Janet Yellen will deliver to Congress Tuesday; Thursday’s Brexit referendum (yes, it will take place); and likely, numerous “PM bullish, everything-else-bearish” headlines that haven’t yet hit investors’ radar screen. 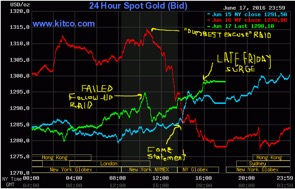 As for gold’s late day surge yesterday; clearly, the latest Brexit polls were a big part of it – post Jo Cox “campaigning hiatus” notwithstanding.  As, contrary to the aforementioned “dumbest excuse” meme, the UK “leave” faction is not only gaining strength, but actually appears to have benefited from Jo Cox’s death.  Not that gold needs a Brexit to rise – as frankly, the case for surging gold amidst an inexorably suffocating European Union is just as powerful as that of an imminently collapsing one.  However, quite obviously the markets fear Brexit more than BrEmain – as they should, as it will unquestionably lead to immediate political, social, and financial market chaos.  Which is probably why Europe’s Central banks have already warned that they will do “whatever it takes” to stabilize the post-Brexit market environment.

Which is probably why, last month, I deemed Brexit the “most important, and Precious Metals bullish, election in history.”  And why, with gold about to hit new all-time highs in countless “first world” currencies – from the Australian and Canadian dollars; to the Mexican Peso; Indian Rupee; Japanese Yen; and even the Euro itself, it’s highly likely that a “leave” result will be the proverbial “straw that broke the Cartel’s back.”  Heck, the discount to Net Asset Value of the Central Bank of Canada (CEF) declined to a three-year low of just 2% yesterday; as it, like the Sprott Physical Gold Trust (PHYS), which now trades at a 1.5% premium to NAV, inches closer and closer to a massive, Cartel-destroying bullion purchase.

That said, in my view, the Brexit developments weren’t even close to the principal reason for Precious Metals’ uncharacteristically strong late Friday surge.  No, it was unquestionably the publication of the COMEX’s weekly “COT report” at 3:30 PM EST.  Which, in depicting yet another explosion of Cartel naked shorting, in gold’s case to a new all-time high level, validated exactly what I wrote in May 10th’s “it’s the commercials that should be scared.”

Frankly, even I was floored to see the Cartel – er, “commercials” – had shorted another 54,385 gold contracts, worth nearly $7 billion, in the week ended Tuesday; and a cumulative 84,039 when including last week’s tally, taking their naked short position to an all-time high of 298,077 contracts – worth an incredible $39 billion, or one-third of global annual production.  In silver, they’re not quite back to last month’s all-time high level.  However, in shorting an additional 9,910 contracts through Tuesday, they’re pretty darn close.  And that, before the massive attempt to cap PMs’ post-FOMC surge on Wednesday through Friday!  In other words, as I have vehemently “pounded the table” of for the past month, the Cartel is completely trapped in its soon-to-be-called-out naked short positions – as “competing” demand is becoming so strong, they can’t cover even a smidgen of their shorts without causing prices to surge.

Consequently, it shouldn’t be long before investors, smelling “blood in the water,” force them to cover into an explosively rising market – just as occurred in the paper silver market in April 2011, when only the infamous “Sunday Night Paper Silver Massacre” was able to eventually bail them out.  Which I assure you, will NOT occur again – as not only is Osama bin Laden already dead, LOL, but the “powers that be’s” ability to stop the tsunami of oncoming PM buying will be unstoppable by any false meme, no matter how much paper gold and silver is behind it.  And this, with registered COMEX silver inventory already at an all-time low level, of not even $400 million worth; which is why, more than ever, the “upcoming, historic silver shortage” I predicted last week appears far more imminent than ever.  Remember, the retail bullion industry had an historic shortage last summer – with no specific crisis to catalyze it.  As opposed to now, when the Brexit; the death of Central bank credibility; and countless other factors make it highly likely that an historic financial crisis, or crises, are upon us.

My friends, the time of the long-awaited “commercial signal failure” – on the COMEX, the LBMA, and all-other fraudulent paper markets – is finally upon us.  In other words, the likely-to-be-spectacular end of the criminal conspiracy that is the two-decade-old “New York Gold Pool.”  And whether it happens next week, month, or year – I assure you, the Cartel’s “can-kicking” abilities are down to its last, dying breaths.  More importantly, TPTB’s ability to delay history’s worst-ever monetary crisis will likely be dead soon, too.  Which is why, if you haven’t PROTECTED yourself financially yet, this may be your last chance to do so!

To that end, for those of you living in the Chicago area, I hope you’ll attend Miles Franklin’s upcoming, FREE, NO STRINGS ATTACHED “Q&A Rap Session” – featuring myself and President and Co-Founder Andy Schectman – this Friday, June 24th; which, given the Brexit vote the day before, could not be more fortuitously timed.