Hey Cartel, Was That The Best You Got?

Do you want bold?  Well you’ll get it today – as after 14 years of Cartel-inflicted torture, the “bull market to end all bull markets” has finally arrived, whether Harry Dent, Larry Edelson, Martin Armstrong, and countless “short-term bearish, but long-term bullish” newsletter writers like it.  The fact is, the “New York Gold Pool” – like the London Gold Pool in the 1960s, and dozens of failed attempts to suppress real money throughout history – is on its last legs, as the broadest, most destructive fiat Ponzi scheme implodes upon itself.  I mean, think about it.  What could be more symbolic of how far the “system” has fallen, than one of Brazil’s top soccer stars warning people about coming to Rio for the Olympics – which for the past year, I have said will either not occur, or do so without the majority of scheduled athletes, spectators, and media?

It’s early Wednesday morning, and I’m building my strength for a run of three podcasts in a row – atop one tomorrow morning, in which I’ll be on fire reiterating my vehement belief that the Precious Metal BULL MARKET has returned.  That is, in U.S. dollars – as in nearly all other nations, it resumed two years ago; which is probably why gold, on average, is either near, at, or well above previous all-time highs in nearly all other currencies.

To wit, for the second week in a row, the Cartel violently attacked PMs on Monday, attempting to quash the previous weeks’ burgeoning strength; in this week’s case, following an historically bad “jobs” report that, once and for all, ended any remaining “hope” of a 2016 rate hike.  As if, LOL, such an event would be a “good” thing, given what happened when the Fed moronically attempted a measly 25 basis point increase in December.

Well, here we are on Wednesday – and not only has gold recovered nearly two-thirds of Monday’s Cartel-orchestrated losses; but silver, the world’s most undervalued asset, is $0.10 per ounce above Friday’s close!

Yesterday, I wrote “it’s the ‘commercials’ that should be scared!” – and it wasn’t bluster, or anger, that prompted my views.  But instead, the math of a collapsing fiat Ponzi scheme, and the sheer blatancy of a Cartel so desperate, it is making mistakes.  Kind of like a dumb criminal leaving giant footprints for detectives to see, as I’ve watched on Forensic Files and other crime shows over the years.  And yet, there’s still so little quality analysis out there; even amidst the “gold community” – which aside from a handful of truth warriors, remains painfully negligent at readers’ time of maximum need.

To wit, here is yesterday’s podcast from Peter Schiff – who along with David Stockman, is the finest economist in the world today.  In it, he dissects Donald Trump’s latest comments like a surgeon, communicating in plain terms how Trump has not a clue what he’s doing – in essence, challenging America’s most powerful, and vengeful, politician, at great personal risk.  This is what you’ll hear in the first 22:03 of this roughly 24 minute podcast – until 22:04, when he decides to “discuss” Monday’s gold and silver market plunge.  I mean, how  can one of the most intelligent economic observers – and prominent Precious Metals advocates – so thoroughly dissect the reality of today’s fraudulent economy; and yet, completely miss, as usual, the factors behind movements in the fraudulent Precious Metal markets?  I have no idea what his motivation is – but to me, it’s just “par for the course” in the world’s most poorly reported market.

Oh well, at least he’s on the right side of the trade, advocating people buy gold and silver – as opposed to the aforementioned group, of people who actually think PMs will decline amidst the biggest currency crisis in history.  Or worst yet, advise people to churn paper investments, rather than buy and hold monetary insurance, at their time of greatest need.  Not to mention, the supposed “geniuses” of Wall Street, who actually advise people to short gold into the most violent supply/demand firestorm in history – like Goldman Sachs, which was stopped out of its moronic “short gold” recommendation this week.

By the way, do you remember the last time Goldman Sachs recommended investors short gold?  Yes, on Thursday, April 11th, 2013, the day of the infamous “closed door meeting” between Obama and the top “too big too fail” bank CEOs – one day before the “alternative currency destruction” paper PM raids were launched, ushering in the final phase of the painful, Cartel-orchestrated “final leg” of the four-year gold and silver “bear market.”  Yes, Goldman was as cocky then as it was three months ago, when it initiated its latest “short gold” recommendation.”  The only problem is, they are too stupid to realize said “bear market” is OVER; and thus, they are committing investment suicide in telling people to short into the stampeding PM bull.  By the way, take a look at where said “commercial” short position was when the “alternative currencies destruction” was launched in April 2013, compared to where it is today.  Yes, it’s twice as much now – at an ALL-TIME HIGH – so they have nothing left to do but cover their shorts, as they were forced to do in the Spring of 2011 with their failed silver gambit.  Only this time, no more fraudulent “we killed bin Laden” stories will be available to save them – as said “bull market to end all bull markets” has arrived. 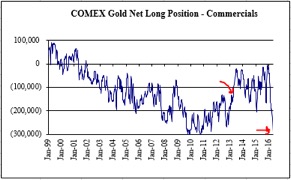 Which is why I can only ask the Cartel, was Monday’s blatant paper raid the “best you got?”  If so, you are about to have one of the ugliest “religious experiences” in financial markets history!  As for my friends in the PM community, we all know the Cartel won’t go down without “kicking and screaming” like an exhausted two-year old.  However, no matter how painful their tantrums have been – or will be – the worst is behind us.  And shortly – hopefully, very shortly – the Cartel will go the way of the “London Gold Pool.”