It’s weeks like this that try even the most die hard Precious Metals bulls.  Or better yet, believers that truth ultimately super-cedes lies, enabling reality to triumph over fraud.  And in this case, let’s face it, good over evil.

Not that we haven’t experienced such frustration, humiliation, and angst dozens of times before.  And in my case, having been “all-in” Precious Metals for nearly 14 years, hundreds of times.  I.e., the relentless capping of all gold and silver rallies, followed by vicious “blitzkrieg” attacks once the “paper buying energy” wanes.

Unwaveringly, such raids are focused on “key attack times” – such as 2:15 AM EST, 8:20 AM EST, 10:00 AM EST, 12:00 PM EST, and 2:00 PM EST – particularly amidst “key attack events,” such as FOMC meetings; Presidential speeches; or heck, any news that in free markets would cause PMs to surge.  Unfortunately, “positive PM events” are now occurring daily; and “negative PM events” never; so both the quantity and intensity of such attacks – not to mention, their transparency – has multiplied exponentially, to the point that not a single second, of a single day, is the Cartel’s foot “off the gas.”

To wit, in just 48 hours since the Fed’s latest credibility-destroying “policy statement,” dozens of reasons for Precious Metals to surge – and stocks to plunge – have emerged, including the following.

1. Passing of a massive U.S. “debt ceiling” increase, enabling massive spending increases that will add $1.5 trillion of debt in less than 18 months’ time.

2. Obama announcing plans to send ground troops to Syria, whilst sending warships to troll the South China Sea – as NATO simultaneously seeks to station thousands of troops on Russia’s Polish and Baltic state borders.  Russia deemed the former action “unacceptable,” and China warned the U.S. that such “provocative actions” could spark war.

3. An horrific, below expectations third quarter GDP report was published.  Not only was it the weakest print in nearly two years, but will likely be revised lower still.  And wouldn’t you know it, the largest component of the third quarter’s supposed “growth” – which itself, is vastly overstated by myriad fraudulent “adjustments,” was healthcare spending.  I.e., mandatory, economy-draining Obamacare-goosed expenditures, benefiting the “1%” at the expense of all others.

4. A nearly perfect 13 for 15 economic data misses (going back to Monday), with the only two “better than expected” being the nonsensical “seventh sigma” beat by the Chicago PMI, and the usual “weekly jobless claims” farce – i.e., the two reports that have been so comically manipulated, for so long, that I last year wrote an entire article devoted to dissecting their fraud.

5. Continued, relentless weakening of commodity prices – with the CRB sitting a mere 5% above the 40-year low it hit two months ago.  In fact, the oilfield carnage took a major stair-step higher today, when Chevron Texaco reduced its 2016 capital spending plans 25% lower than what it forecast just three months ago, announcing an additional 7,000 layoffs in the process.  Heck, even Saudi Arabia’s credit rating was downgraded today – to just a few notches above junk.

6. As the amount of negative-yielding European debt hit an all-time high of €2.6 trillion – following the ECB’s hint last week that it is considering an expansion of its historically suicidal QE program, Puerto Rican sovereign bonds plunged to a new all-time low – putting America on an increasingly short path towards a massive, taxpayer (i.e., printing press) funded bailout.

7. The Bank of Japan announced that it now owns 52% of the entire Japanese equity ETF market, showing just how far Central banks will go to “monetize” financial assets.

9. Koos Jansen reported that gold withdrawals from the Shanghai gold exchange – comprising a significant percentage of Chinese gold consumption – have been so powerful, they are on a pace to not just break, but shatter 2014’s record levels.

But alas, despite these mega PM-bullish factors – and many others – the Cartel was “lying in wait” for the FOMC’s comically vague, but indisputably uber-dovish, policy statement Wednesday afternoon; viciously attacking gold and silver just after they had convincingly risen above their 200 day moving averages – which clearly, had been a major Cartel “line in the sand” for the past three weeks.

And thus, by week’s end, after relentlessly attacking both metals – whilst goosing stocks to their most “overbought” level in years, gold and silver were $1,142/oz and $15.54/oz, respectively; compared to $1,182/oz and $16.35/oz just before Wednesday’s afternoon’s FOMC statement; and their respective 200 DMA’s of $1,173/oz and $15.93/oz.  And oh yeah, the HUI plummeted from 140 on Wednesday afternoon to 122 at Friday’s close, or 13%.  Consequently, if my personal emotions are any indication (which I’m sure they are, and I don’t own any mining stocks), Precious Metal bulls ended the week as angry, and frustrated, as at any time in recent memory.  Which, I’m sure, evinced many a thought that “we’ll never win” and the like – particularly here in America, where the “strong dollar” (caused not by U.S. strength, but a collapsing global economy) has prevent physical gold and silver prices to perform as well as in most overseas markets, where  “lesser” fiat currencies are collapsing en masse.

Thus, I decided to prove what I have been contending all along.  That is, that “Economic Mother Nature” and the “unstoppable tsunami of reality” are indeed “winning” – even if they haven’t yet conquered “last to go” markets like paper gold and silver, and the “Dow Jones Propaganda Average.”  Which, per what I am about to show you, I believe I have done in spades.  Which, in turn, will hopefully empower you to realize that gold and silver – which, as noted above, are rising in dozens of currencies – are getting closer and closer to surging in all fiat currencies, particularly the U.S. dollar.  Not to mention, that be it via hyperinflation or crash, “favored” asset classes like stocks and bonds are fighting unprecedented deflationary forces, which history guarantees will eventually defeat them.

To wit, in May 2014’s “place your bets, Economic Mother Nature versus Wall Street,” I espoused that no matter how much money printing, market manipulation, and propaganda the “powers that be” attempt – which, as it turns out, is unparalleled in history – the fundamental laws of supply and demand will win out.  And given that today’s manipulative monstrosity is the result of history’s largest, most destructive fiat currency Ponzi scheme; aided by the “leverage” afforded by the Frankenstein-like financial engineering that plagues finance like a malignant cancer – such as derivatives, off balance sheet entities, and high frequency trading algorithms; “Economic Mother Nature’s” revenge will be as impactful and long-lasting in substance, as in style and “volume.”  Quite simply, the amount of “deformation” – i.e., oversupply of every imaginable economic input (like hundreds of trillions of worthless “currency units” – has put the world at the precipice of an historic financial collapse.  Which, sadly, has without exception, been the cause of everything from draconian government actions, social insurrection, and geopolitical wars throughout several millennia of human history.

Since the May 2014 article, the unparalleled Cartel pressure that commenced when first silver, and then “dollar-priced gold” achieved record high levels in mid-2011, has not only ruthlessly continued, but inexorably intensified.  Frankly, even I have been shocked by how unrelenting such attacks have been – which clearly, depict just how terrified said powers that be are.  And thus, just how close we are to the “end game” of a full-out loss of economic, political, and financial market control.

That said, for all the misery “goldbugs” have been forced to endure, dollar-priced gold prices have only declined by 10% since May 2014.  Moreover, whilst paper silver prices have been smashed by “fallen” 21%, physical premiums have measurably increased – mitigating the 21% paper decline (at some times, such as August and September of this year, by significant amounts).  Moreover, the overseas gold “bear market” ended around the very time the May 2014 article was written; as in nearly all currencies gold has moved higher – and in some, surged to all-time highs.  Heck, even “first world” nations like Canada and Australia – and the world’s largest trading bloc, Europe – have witnessed significant prices surges in the past year and a half. 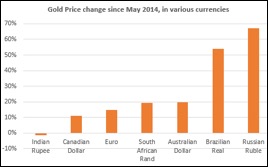 That said, “Economic Mother Nature’s” wrath has been far more widespread than the worldwide gold and (physical) silver markets – on both Wall Street and “Main Street.”  As you can see below, her impact could not be more evident; starting with the CRB Commodity Index, which has plunged by 37% since – led by a stunning 56% plunge in crude oil, the world’s largest revenue (and tax) producing market. 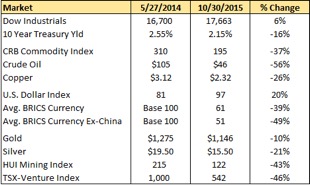 Moreover, fiat currencies – which if they truly were “money,” would be far more stable in value – have been in free fall mode since; i.e., the “single most Precious Metal bullish factor imaginable.”  To that end, the “dollar index” – i.e, a basket of the world’s “leading currencies” – has surged by 20% since, due to the massive currency-debauching NIRP and QE programs launched by the ECB and Bank of Japan.  However, the major currencies’ declines have paled in comparison to “third world” and “emerging market” currencies; which, on average, have plunged to or near all-time lows – led by the “ BRICS”; i.e, the five nations Goldman Sachs a decade ago predicted would lead the global economy for the next hundred years.  And while the PPT has enabled “last to go” markets like the “Dow Jones Propaganda Average” to tread water – at least, in nominal terms – many global stock markets have topped not only in real terms, but nominally as well.  As have interest rates; which, despite the propagandized “recovery,” have plunged into oblivion due to expanding NIRP and QE programs – the result of collapsing global economic activity, and the resultant “final currency war.”

Last but not least, “paper PM investments” have been all but annihilated by Cartel naked shorting and the collapse of the mining business due to years of price suppression of gold, silver, and mining shares.  To wit, the HUI index of senior miners is down 43% since May 2014, and the TSX-Venture index (the best proxy for junior miners) 46% – taking their cumulative losses since peaking in April 2007 and September 2011, respectively, to 81% and 84%.  In other words, decidedly not proxies for gold and silver prices; and care of the Cartel, the worst imaginable investments for the past 5-8 years.  Not that that can’t change in the future; but to this point, an indisputable market truth.

To conclude, as frustrating as this week has been – and the 17 months since my “Economic Mother Nature” article was written – the fact remains that the “powers that be” are decidedly losing the war with reality; even in the gold markets, where prices are surging in nearly all fiat currencies.  Eventually, they will lose control altogether – of both economies and financial markets; and of course, dollar-priced gold and silver.  And when they do – which perhaps, will be a lot sooner than most can imagine, if you haven’t already protected yourself, it will likely be too late.