If the Largest Treasury Owners Are Selling, Who’s Left to Buy?

Yesterday, I wrote of how the largest “pink elephant” in financial markets HISTORY; to date, all but ignored by the MSM – is the fact the 30-year bull market in U.S. Treasury bonds is decidedly OVER.  Worse yet, the current bond bubble was inflated by a “Fed gone wild” to unprecedented levels of overvaluation; and thus, as they say, “the bigger they come, the harder they fall.”

No matter what metric is utilized to measure Treasury bond valuations – be it money supply growth (reported and unreported); inflation (reported versus real); debt; secular economic trends; Congressional dysfunction, geopolitical tension; or otherwise – the paradox of record-low interest rates sticks out like a sore thumb. At this point, even the most disingenuine, ignorant, and “patriotic” must admit that ONLY Federal Reserve “QE” buying has kept rates this low; and frankly, that only increased QE even has a chance at preventing a “disorderly” collapse.

As we ALL have learned in recent years, human nature causes people to believe in the impossible so long as it appears possible – like Treasury yields plummeting despite RECORD debt and inflation, and a supposedly “recovering” economy.  However, now that rates are convincingly rising, the “reality cells” in society’s brain are collectively awakening.  From my experience, today’s “financial dyslexia” was no different in the late 1990s – when EVERYONE was convinced internet stocks could only rise; and “ditto” for mid-2000’s real estate.  Nowadays, financial hindsight is 20/20; but back then, there was nary a peep of dispute for the day’s “truisms.”

Back to the pink elephant in the room – i.e., the END of the bond bull market; my first thought is that such an event will take years to be fully recognized by the masses, per the below reasoning.  It’s one thing for stocks to have built a decade of public love in the 1990s (remember, confidence was hit hard by the 1987 crash) – while the 2000s real estate bubble unfolded in an even shorter amount of time.  However, in the case of bonds, the bulls maintained control for a full 32 YEARS; for most, their ENTIRE investing lifetimes.  Thus, two full generations of bullish “truisms” will need to be erased from the collective consciousness; and with the “evil Troika” of Washington, Wall Street, and the MSM fighting this inevitability “tooth and nail,” it will be even more difficult to dislodge the flawed logic that bonds can only rise; particularly when for many, they represents their only hope for financial salvation.  Thus, outside a market-destroying “black swan” event – which in my view, has a very high probability of occurring – it’s entirely possible the public will hold on to their bond funds until the losses become catastrophic; in turn, fueling plunging consumer spending, a further weakening economy, rising unemployment, and accelerated government MONEY PRINTING, debt, and deficit spending.

But that’s just the half of it, as the financial woes of the public represent but a fraction of the expanding financial hell America faces – and, for that matter, the ENTIRE WORLD – due to rising Treasury bond yields.  Said “small fry” have a huge cumulative impact; but the issue tends to be a slower, more “water torture-like” problem than the WATERFALL DECLINE-like issues to be described next; related to the respective plights of the WORLD’S LARGEST TREASURY BOND OWNERS.

For the past two decades, China and Japan utilized currency destruction, cheap labor, patent stealing, and lopsided (in their favor) trade agreements to not only increase global manufacturing market share, but do so permanently.  Consequently, they accumulated vast caches of devalued U.S. dollars via some of the largest trade surpluses in financial history.  In turn, they “recycled” such funds back into U.S. Treasuries; by doing so, extending the PONZI SCHEME of so-called “dollar strength” – and thus, allowing unwitting Americans to live beyond their means (buying “cheap” Chinese and Japanese goods).  Throw in unscrupulous American lending practices, irresponsible government spending, and PROPAGANDA of the nation’s so-called “superiority,” and the next thing we knew, the U.S. was drowning in the world’s largest debt edifice; which by now, the world’s “smart money,” i.e, the Chinese and Japanese governments – KNOW can never be repaid in constant dollars.

At the time of 2008’s Global Meltdown I, both China and Japan held roughly $600 billion of U.S. Treasury securities apiece – while the Federal Reserve held $400 billion.  At the time, the U.S. national debt was roughly $10 trillion.  Thus, China, Japan, and the Fed owned 6%, 6%, and 4% of total Treasuries outstanding; i.e., large, but relatively manageable amounts that could likely be sold without causing major market dislocations.

However, post-2008 – when global financial markets were permanently broken – global governments joined the largest-ever “can-kicking” game out of “necessity”; i.e, to prevent a total, instantaneous implosion of the global financial system.  Sadly, all they accomplished was make the situation exponentially worse – in return for maintaining a rapidly weakening “status quo” for a few more years.  And NO PLACE is this more evident than in the “linchpin” of the worldwide banking system, the U.S. Treasury market.

Not only has Fed “QEing” ballooned its Treasury holdings from $400 billion to more than $2 trillion – i.e, a 5x increase that continues to rise by $45 billion per month (excluding capital losses); but by going out further on the yield curve – i.e, acquiring longer duration bonds – its exposure to rising rates has vastly increased.  Moreover, by purchasing an additional $1.4 trillion of toxic mortgage securities from insolvent banks and its former “quasi-federal” partners at Fannie Mae and Freddie Mac, the Fed now has an unwieldy, ungodly bond portfolio of more than $3.6 trillion – making it the world’s largest, most risky HEDGE FUND. 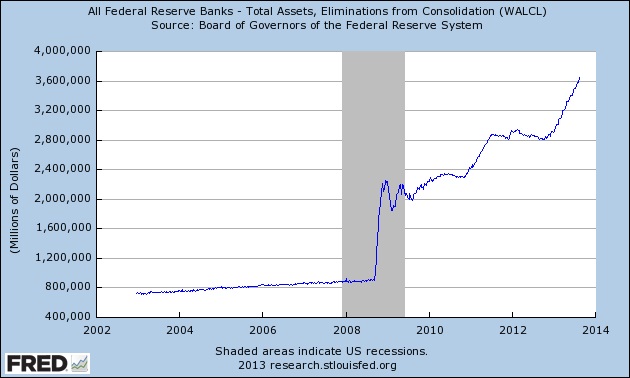 Most of you are well aware of this hideous financial conundrum, I’m sure.  However, how many realize that both China and Japan – despite collapsing economies, and in Japan’s case, exploding MONEY PRINTING – have nearly doubled their U.S. Treasury holdings as well?  That is, from holding roughly $600 billion of Treasuries each in 2008, they now hold roughly $1.2 trillion each.  As the U.S. national debt is now about $17 trillion, the Fed, China, and Japan have thus increased their “market shares” to 12%, 7%, and 7%, respectively.  Moreover, the Fed is now buying at least 70% of ALL new Treasury issuance; and based on these numbers, China and Japan have been taking up most of the slack.  In other words, NO ONE else on the planet has been a net buyer since 2008 – which is why the bastardized concept of Fed “tapering” is at best, a bad joke.

Fast forward from the “top” of the Treasury market last summer – when “all was well” from the perspective of Chinese and Japanese sovereign wealth funds – to last Fall.  First, Japan finally admitted how dire its economic situation was by engaging in its maniacal “Abenomics” plan to double its money supply within two years.  Next, the Fed announced QE4 in December – followed by this Spring’s blatantly obvious Chinese slowdown.  Throw in today’s ALL-TIME HIGH European unemployment, and spreading economic crises in places as diverse as Greece, India, Brazil, Turkey, and Egypt – in many cases, due to surging inflation – and it should become crystal clear that worldwide demand for artificially ultra-low yielding U.S. Treasuries is in FREEFALL mode.

In other words, irrespective of valuation, most nations need CASH in a hurry; and thus, are dramatically increasing their sales of liquid assets like U.S. Treasuries.  In June alone, China and Japan sold more U.S. Treasury bonds – $42 billion, to be exact, or nearly 2% of their combined holdings – than in any single month EVER.  Moreover, I suspect this pace has been at least sustained into the summer; and if the July and August numbers depict such, it may well catalyze a global Treasury-selling panic.  In other words, the 2008-2013 buying of the Fed, China, and Japan made the Treasury market “too big to sell”; yet, in 2013, that is EXACTLY what China and Japan are doing.

And on to today, with a critical FOMC meeting set for September 18th; and just beyond that, the commencement of U.S. budget discussions – talk about an oxymoron – that will likely end in a MASSIVE increase in the U.S. “debt ceiling”; or, more likely, elimination of it entirely.  By now, I think it’s quite clear “tapering” is off the table – as I have vehemently stated all along; as frankly, such an announcement would be the equivalent of financial SUICIDE, in light of the current bond market implosion.  For the record, by the way, “tapering” doesn’t mean ending QE bond buying, but simply slowing its pace.

Frankly, I think the bigger question is whether the Fed will be forced to announced QE5 on September 18th; or if not, shortly thereafter.  Now that China, Japan, and the ENTIRE WORLD are selling Treasuries, who is left to buy them – other than increased Fed buying?  Not to mention, has anyone mentioned just how much equity the heavily leveraged Fed has at risk?  Currently, the average duration of the Fed’s holdings is just over ten years; and thus, the Fed has swallowed more than $300 BILLION of losses in the past two months alone – from a starting capital base of less than $100 billion!  Thus, not only is the Fed’s credibility at stake – which could potentially catalyze an avalanche of global Treasury selling – but its very solvency.

Hopefully, this commentary sheds a shocking amount of light on the terrifying financial “Hobson’s Choice” the Fed faces – given its position as the Treasury “buyer of last resort.”  With $17 trillion of Treasuries outstanding – and issuance expected to dramatically expand in the coming years – the Fed MUST take a “last ditch” stand to “turbo-QE” rates back down, a la “Abenomics.”  In my view, such a venture will decidedly FAIL – as Abenomics has, thus far; but more importantly, it will drive WORLDWIDE buyers out of what have been PROPAGANDIZED as “safe haven” assets into the only asset class that has actually served this role throughout history – i.e., PHYSICAL gold and silver.  The inflation that will be unleashed on unsuspecting Americans will truly be a site to behold; and sadly, less than 2% even have a chance to protect their assets with REAL MONEY.