Following this Fall’s blatant Cartel raids – including Monday’s third “stop logic” shutdown in the past week, caused by someone putting in a market order to sell $184 million of PAPER gold; the usual PM fear-mongers have crawled out of the woodwork.  They claim there is no manipulation, yet offer no explanation as to why prices are down sharply amidst record Chinese gold demand, U.S. Mint Silver Eagle sales, and Indian gold premiums.  No one asks why COMEX registered gold and silver inventories have so rapidly declined; why junk silver stubbornly trades several dollars above spot; or why – on Friday – Shanghai silver closed at $1.13/oz., or 6%, above the $19.90/oz. COMEX close.  Heck, as the Fed finishes blowing the “bubble of all nominal bubbles,” even Cartel whistleblowers are being ignored.

I’ve spent a decade proving the paper markets are but a mirage – which ultimately, will be shattered by the reality of physical demand.  My five 2011 “manipulation primers” are archived on the Miles Franklin website; plus, countless articles describing what the Cartel does, when they do it, and why they do so.  My latest “expose” – published six weeks ago – is as damning as any I’ve written; and in light of this week’s COMEX Options Expiration “attack event,” I thought it apropos to expand upon it.

As many readers are aware, December is the year’s largest COMEX delivery month.  Since April’s “Alternative Currency Destruction” – not to mention, January’s German repatriation request – registered COMEX gold inventory has plunged 80%; to a measly 589,000 ounces, worth just $740 million at current prices.  Registered silver inventories actually bottomed in 2011; but still stand at just 44 million ounces, worth an equally paltry $880 million. 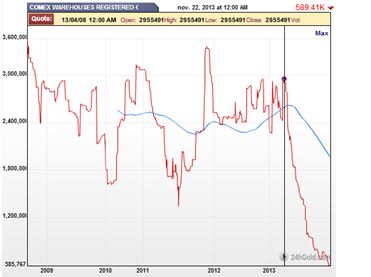 Historically, a very small percentage of “CRIMEX” contracts typically stand for delivery.  However, as we reached expiration day yesterday (Monday); long contracts representing a whopping 12.6 million ounces were still open.  The Cartel’s handiwork was on display all day; including a prototypical Sunday Night Sentiment attack and subsequent visit from the 2:15 AM suppression algorithm for the 122nd time in the past 134 trading days.

Below, you can see the DLITG, or “Don’t Let it Turn Green” algos at work all morning; for once, swamped by buying in the afternoon; but not until exactly the 1:30 PM EST COMEX close – just in time for thousands of $1,250 calls to expire worthless.  However, as I have noted countless times before, call “profits” are immaterial; as they are but paper gains.  What matters most is what happens on Wednesday’s “first delivery day”; i.e., when those holding long contracts notify the exchange of their intention to take physical delivery.  Will this be “the month” that breaks the COMEX?  I don’t know; but what I do know is that the time when fraudulent, Western PAPER exchanges set prices is nearing its end; in lieu of legitimate, Eastern physical exchanges. 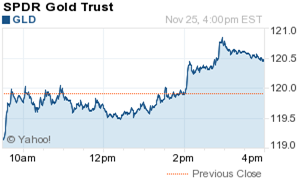 Regarding this year’s epic, unprecedented attempts to suppress gold and silver prices – amongst the most bullish fundamentals imaginable; I believe it was TPTB’s only alternative.  Without such historic naked shorting, I have little doubt prices would have exceeded the 2011 highs; which, by the way, they briefly did in several other nations – like India and Japan, for example.  Surging PM prices amidst this year’s global “QE blitzkrieg” would likely have catalyzed a fiat currency panic; which, frankly, nearly occurred in countless nations, as epitomized by the “Fragile Five” of India, Indonesia, Turkey, South Africa, and Brazil.  Bitcoin may be an interesting speculation at this point; but when people start shifting their savings to real money, watch out!

Back to the numbers, I researched each of the five daily “Key Attack Times” throughout 2013.  As you can see, the results are damning; as on roughly two-thirds of all trading days, gold was attacked at the 2:15 AM EST open of the London “pre-market” session; the 8:20 AM EST New York COMEX open; and the 10:00 AM EST “PM Fix” – i.e., the close of global physical trading.  Moreover, the 2:15 AM algos have been particularly active in the last six months; attacking on 91% of all trading days since June, compared to just 23% in the first half of the year.

Furthermore, the 12:00 PM EST “cap of last resort” was utilized on half of all trading days, and – as was the case today – the 2:00 PM “crybaby attack” one quarter of the time.  Using statistical parlance, I think the term “sixth sigma” is well in order!

Next, I updated the silver/Dow volatility comparison I created two months back; which if you can believe, has since gone even further “off the charts.”  Yes, the Dow Jones Propaganda Average has had exactly one 2% decline all year – and that, amidst the likely orchestrated post FOMC tapering comments of June 19th; whilst silver has had a 2%+ decline on 48% of all trading days!

However, I wanted to take the analysis a step further this time; so as to prove Dmitri Speck’s 15-year “manipulation blueprint” continues to this day.  Per his revolutionary work below, gold has been lower in Western trading hours throughout a 12-year bull market; offset, of course, by rising prices in Eastern trading. 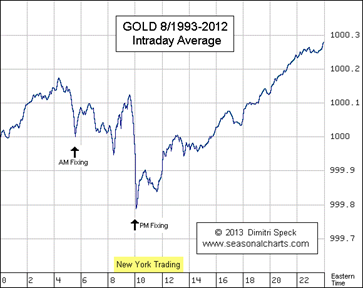 As you can see, Speck’s chart was dead on in 2013; as in the process of trading 26% lower since January 1st, gold has only been lower during Asian trading hours on 5% of all trading days!

As a reference point, below is the global trading time-line, listed in New York time.  Notably, it doesn’t depict “pre-market” trading – such as 2:15 to 4:00 AM EST in London, and 7:00 to 8:20 AM in New York; i.e., when nefarious shorting, such as last night’s “stop logic” attack, typically occurs amidst highly illiquid trading conditions.  Moreover, much of the reason gold’s overall Asian trading results are positive is the shenanigans that occur daily between the 4:00 PM EST NYSE close and the 7:45 PM EST Hong Kong open.  This is easily the most illiquid time of the day – as zero major markets are open; and thus, it shouldn’t surprise you that gold is “walked down” on roughly 95% of all trading days during these hours.

Again, the reason I go to such lengths to prove PMs are suppressed is to empower you to realize paper markets don’t represent the true state of supply and demand.  Heck, even mainstream outlets like Bloomberg are now speaking of it – as they did yesterday, in shedding light on the obvious manipulation of the “London Fix.”  Put simply, TPTB does not want you to survive the upcoming economic conflagration; as the fewer that do, the more powerful they become.  Globally, Physical PM markets are tightening at a rate not seen in generations; and thus, when the next crisis hits, I fully expect supply to disappear – perhaps, permanently.  Do your own due diligence; as only you can determine how to protect yourself from what’s coming.  And if you have any questions, Miles Franklin is always here to give answers.