In recent weeks, precious metals momentum has measurably improved, care of a ceaseless stream of negative economic and geopolitical news.  Well, that and the fact that gold and silver prices have been artificially suppressed well below their respective costs of production, amidst the strongest fundamental environment of our lifetimes.

That said, amidst the seas of money printing, market manipulation, and propaganda, an “island of lies” exists where “all’s well.”   Said island is populated by fraudulent, government generated “diffusion indices” and employment data – as well as a handful of bankers, politicians, and corporate titans sitting atop history’s largest most destructive Ponzi scheme.

Fortunately, “Jekyll Island” – for wont of a better name – lies well below sea level, with history’s most destructive tsunami heading its way.  It won’t be long before this “Island of Lies” not only loses its ability to influence the gargantuan lands surrounding it – housing 99.9% of the world’s population – but is completely engulfed by the relentlessly advancing tide of history.

This morning was as difficult as it gets from a topic-picking standpoint, as the June NFP report loomed over my thought process like an albatross.  Precious metals prices have moved up smartly in recent weeks, so it couldn’t be clearer the Cartel was targeting today’s “key attack event” – published in ultra-thin market conditions, a day ahead of a three-day holiday weekend – to quash burgeoning gold and silver momentum.

Monday’s “surprise” breach of gold’s post-FOMC “line in the sand” at $1,320/oz. simply gave way to maniacal capping at $1,330/oz.  When combined with the recent amount of COMEX “commercial” naked shorting; technical conditions were created that black box algorithm traders characterize as severely “overbought.”  And thus, having engendered this fraudulent situation, the Cartel intended to strike this morning – and then some.

By the way, the reason I put “overbought” in quotes is because in rigged markets, there’s no such thing.  As you can see below, government supported markets like the NASDAQ can rise continually with technical variables pegged off the scale; as opposed to gold, which is not allowed to advance once such conditions develop.  By the way, notice how gold suddenly become “overbought” the day it rose $45 two weeks ago, following the Fed’s “unexpectedly” dovish statement.  In hindsight, we learned that COMEX “commercials” naked shorted a ridiculous 53,000 gold contracts – valued at $7 billion – surrounding that statement.  Otherwise, said “overbought” condition would likely have occurred at $1,420/oz. not $1,320/oz.  Sorry to start today’s article with such a technical discussion, but it’s very important that you realize what’s going around us is but a mirage – to promote a mythical economic “recovery”; push the benchmark 10-year Treasury yield back into the Fed’s “acceptable range” of 2.6% – 3.0%; and dictate to the world that precious metals are not required because “all’s well.” 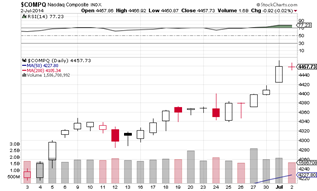 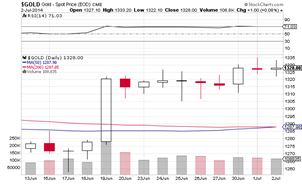 That said, precious metals are doing much better than TPTB would have liked, with gold down just $6/oz. – following its typical pre- and post-NFP raids; whilst silver held the line at what appears to morphing into significant support at $21/oz., and just turned positive for the day.  We’ll see how powerful the forces of reality are becoming in the coming weeks; and if Jim Sinclair is indeed correct, said reality may well take the form of the aforementioned financial tsunami.

Before the fraudulent NFP report even was published, a veritable sea of bad news emanated from the four corners of the globe.  In both Iraq and the Ukraine, the odds of wide-scale war are increasing with each passing day; whilst both Argentina and Puerto Rico teeter on the verge of default.  They may not be the largest of countries, but the fact that U.S. “elites” are deeply entrenched in both situations only bolsters the odds that the rapidly escalating “de-dollarization” movement moves to deliver a lethal blow in the coming months.  In Argentina’s case, it will likely default because the U.S. Supreme Court ruled it was not allowed to make interest payments until it pays off loans to vulture-like U.S. hedge funds; and in Puerto Rico’s case, just four months after a gargantuan $4 billion bond issue was shoved down investors’ throats by Wall Street.  Given the potential systemic risks of a U.S. “commonwealth” going bankrupt, significant debate is ongoing as to whether the U.S. taxpayer should backstop Puerto Rico’s $70 billion of debt.  No problem, the Fed will just print it.

Outside “the island,” Economic Mother Nature has never been angrier.  In “freely-traded” markets, news that the world’s second largest earth-moving equipment manufacturer disclosing dramatic demand reductions would have been catastrophic.  Which is exactly what occurred last night, when Komatsu’s CEO said Chinese sales are falling “more steeply” than the anticipated 20% decline.  In fact, Chinese land developers are – if you can believe this – guaranteeing home buyers they will repurchase properties at a profit in the future in a desperate bid to generate badly needed cash flow amidst the imploding Chinese construction bubble.  By the way, the only larger construction equipment maker is Caterpillar, which two weeks ago disclosed its Asian sales plunged 30% in May, relative to a year ago.  In fact, Caterpillar’s global sales have declined on a year-over-year basis for the past 18 months; but no matter, on the “Island of Lies,” such developments are unabashedly positive.

Meanwhile, Central bank generated inflation is engulfing the planet like a plague; from Japan, where real wages – following 23 straight months of decline – were reported to have posted their largest monthly decline since the Lehman Brothers collapse.  And don’t tell the Fed, but its own “Survey of Consumer Expectations” forecasts 2014 inflation of 3.2%-4.3% or twice the Fed’s expectation of 2.0%.  Then again, Federal Reserve governors are part of the “1%” benefiting from its policies; as opposed to the vast majority, who have experienced flat incomes for the past 25 years, but, for example, a 14% increase in rental prices.  Which, by the way, have been turbo-charted by the “buy to rent” Ponzi scheme fostered by the Fed printing endless trillions and handing them to Wall Street to speculate on distressed real estate.  And the scariest part of it all is that history’s largest “liquidy injection” has pushed asset valuations – of stocks, bonds and real estate – to unprecedented levels, dramatically increasing the odds of catastrophic “mean reversion”; which, when it inevitably occurs, will force Central bank printing presses into hyperdrive.

And I’d be remiss to not mention the financial tragedy unfolding in India, which for some time we have characterized as the world’s worst managed nation.  Just a week away from the anticipated reduction – or outright repeal – of last year’s suicidal gold and silver import tariffs and restrictions, the Reserve Bank of India is actually considering swapping its 557 tonnes of gold reserves – to criminals like the Bank of England and Federal Reserve – in an effort to “improve the management of its reserves.”  Subsequently, it would sell such “international standard” gold in the Indian markets, so as to maintain the gold within India, whilst reducing its “trade deficit.”  If they indeed do this, it would rank as one of the unwise Central bank decisions ever – especially as the RBI went to such effort to outbid the Chinese for 200 tonnes of supposed “IMF gold” five years ago.  Par for the course for India, as $24 billion of gold could have aided their efforts to survive the upcoming global fiat currency collapse, which its own “Rupee” will be at the forefront of.  Conversely, they are seeking $24 billion worth of worthless rupees for their invaluable gold – assuming it’s real and not just “double-counted” IMF book entries.  In other words, less than the amount the so-called “tapering” Fed prints each month.

As for the NFP employment report itself, it’s difficult to determine if it’s as fraudulent and misleading as yesterday’s ADP employment report, or more so.  Yesterday, we warned “when the NFP report is published, take a deep breath and wait for the internals to circulate.”  We assure you, the more you look the uglier this heavily rigged report will appear.

And never have more prescient words been spoken, as the supposed 288,000 “job” gain – was entirely due to part-time jobs, whilst full-time jobs dramatically declined!  There is nothing new about this ugly trend, and for some time we have wondered why the BLS considers temp and part-time jobs to be the equivalent of full-time jobs – particularly given the unrelenting multi-decade decline in real wages.  In fact, June represented the largest monthly gain in part-time jobs in two decades, calling into question if the U.S. economy has permanently plunged into a decrepit state of low quality, sub poverty level labor dynamics.  Or as we deemed it last year, the “new employment paradigm.”

Worse yet, whilst the “unemployment rate” plunged another 0.2% – to a six-year low of 6.1% – another 92,000 people left the work force, yielding another 35-year low Labor Participation Rate of 62.8%.  This in turn, will cause already exploding government entitlement programs to  expand further yielding higher deficits, increased borrowing needs, and a more advanced “dependency nation” heading for Communism at a breakneck pace.  By the way, of the supposed 288,000 new “jobs,” 121,000 emanated from the BLS’ phantom birth/death model, and just 26,000 from actual good-producing businesses.  As you can imagine, the healthcare, education and food service (i.e., “waiters and bartenders”) sectors were the leaders; none of which produces a single dollar of actual GDP.

As I write, just past 11:00 AM EST, silver has recovered all its losses whilst gold is down just $5/oz. following the typical Cartel shenanigans following the monthly NFP propaganda campaign.  In our view, this is an extremely positive sign, as no doubt today was targeted with a giant “X” to quell the globally rising tide of PM bullishness.  Given that physical supplies are as tight as can be, with demand sitting near record high levels and production on the verge of further precipitous declines, it wouldn’t take much for the Cartel’s “end game” to commence in earnest.  And when it does, if you haven’t already protected your assets from the inevitable hyperinflation, it will be too late.