Long-time readers are well aware of our view of Japan’s outlook, both short and long-term.  Sadly, the days of its post-war “economic miracle” are so far in the rear view mirror, it’s difficult to believe Japan was once considered America’s chief economic rival.  When Mitsubishi Real Estate acquired New York’s Rockefeller Center in October 1989, the Nikkei was just two months from peaking at 39,000; while the Japanese real estate index briefly touched 250.  Twenty-four years later, the Nikkei is just 16,000, whilst the real estate index is roughly 80, and new housing starts at an all-time low.

Based on such data, one might infer Japan’s monetary policy has been highly conservative, and/or its economic fundamentals structurally flawed.  Regarding the latter, such a conclusion is spot on; as not only have China and other Southeast Asian economies become lower-cost production hubs, but the “demographic hell” we wrote of 18 months ago is severely crimping the increasingly socialist nation’s ability to fund itself.  Just last week, it was reported that the Japanese population dramatically declined in 2013; and not only that, a spreading “zeitgeist” of sexual inactivity may well make the world’s oldest population significantly older in the coming years.  Given Japan’s massive debt – at 214% of GDP, versus the global average of 51%; its ability to repay creditors, much less fund the retirement of tens of millions of senior citizens – is for all intents and purposes, ZERO.

Conversely, its monetary policy has been as far from “conservative” as possible.  Given that ALL fiat currency regimes are Ponzi schemes, it should be no surprise that Japan’s population, exactly ten years older than that of the United States (45 versus 35) experienced its standard, Central bank fostered bubble exactly ten years earlier (1989 versus 1999).  To wit, the Bank of Japan lowered its benchmark lending rate from 9% in 1980 to 2% in 1989, catalyzing a massive equity and property crash in December 1989 that reverberates to this day.

Consequently, Japanese rates were effectively taken to zero in 1996, where they have since stayed; causing Tokyo to be ranked as the world’s most expensive city for 14 of the past 20 years.  Putting such inflation into perspective, the average price of a loaf of bread in Tokyo is $9.06, and a gallon of milk, $11.10.  And oh yeah, the world’s second most expensive city is Osaka.  However, according to Japanese government propaganda – which frankly, makes U.S. propaganda appear tame, Japan is experiencing the world’s worst deflation.  Of course, as we wrote two years ago, inflation tends to attack what we “need versus want”; and thus, the fact that Japanese real estate investments are down is immaterial when calculating the comprehensive cost of living.  Throw in the catastrophic impact of 2011’s Fukushima nuclear incident, and it’s quite clear Japan has indeed become the “Land of the Setting Sun.”

Unfortunately, Japan’s “leadership” is engaging in the same, fatally flawed policies that have doomed hundreds of currencies throughout history, and dozens of civilizations.  In its view, the only “alternative” is to continue printing money, lest the entire Japanese economy will instantaneously implode.  And since it’s been at it longer than any other nation, Japan’s debt situation is far direr; and thus, its likely lifespan shorter.

In re-electing Shinzo Abe to a second stint as Prime Minister last year – after his first stint, in 2006-07, was a miserable failure – the populace sentenced itself to economic death by enabling his suicidal “Abenomics” to be enacted.  After ten unsuccessful rounds of “QE,” Abe instituted the unprecedented “quantitative qualitative easing” in April 2013; in essence, aiming to double the Japanese money supply in two years – utilizing such funds to monetize not only JGBs, or Japanese Government Bonds, but stocks as well.  The Bank of Japan’s balance sheet is already much larger than the Fed’s (excluding “off balance sheet” transactions, of course); and given that Japan’s GDP and population sizes are just 40% of the U.S.’s, one can see just how dangerous the situation has become. 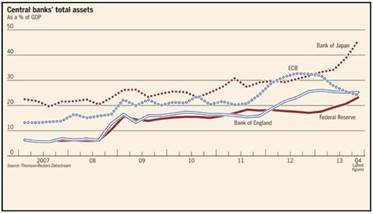 Moreover, Japan is – by far – the third largest holder of U.S. Treasuries, right behind China.  And given how the Japanese government desperately needs to fund the retirement of its aging population, its recent halt of Treasury purchases may well morph into a wholesale sales waterfall in the coming years.  Hence, the need for the Fed to engage in “QE to Infinity”; until eventually, its balance sheet is as unwieldy as the Bank of Japan’s.

Not surprisingly, Abenomics has thus far been an unmitigated failure.  Abe has succeeded in pushing the Nikkei up from 8,000 to 16,000.  However, it is still 60% below its 1989 peak in nominal terms; and in real terms, at least 80% lower.  Moreover, the Japanese CPI hit a fresh five-year high last month, with third quarter GDP growth – utilizing a woefully understated inflation deflator coming it at a paltry 0.5%.  Worse yet, with a massive sales tax increase set to take effect in April – from 5% to 8% – it’s entirely possible Japan will re-enter recession exactly a year after the commencement of Abenomics.  It’s no wonder Abe’s approval rating is at an all-time low, and that a new $53 billion fiscal “stimulus” program – engendering additional money printing – has just been approved.

However, the most worrisome aspect of Japan’s descent into the abyss – which may well instigate a war with long-time enemy China – is its target of destroying the value of the Yen.  As we wrote a year ago, Japan has been a key instigator of the “final currency war”; as in its goal to maintain jobs at the expense of real income (which has fallen for 17 straight months), it has catalyzed global outrage, and revitalized the “race to debase” like never before.  To wit, when the Yen first breached the 103/dollar level to the upside in May, we wrote of how the “Real Yen bomb – starts NOW.”  Subsequently, the entire world did everything it could to stabilize the Yen’s plunge.  However, now that calls for increased Japanese QE are growing louder, the Yen has decidedly broken down – surging above 105/dollar as the calendar turned to 2014.

As you can see below, such consternation has been caused by but a “blip” from the Yen’s all-time high of 75/dollar roughly a year ago.  In other words, while the absolute impact of 33% devaluation has been significant, it is immaterial compared to just how far the Yen could possibly fall; and thus, how intense the “final currency war” could get.  When Japan’s asset bubble burst in 1989, the Yen/dollar exchange rate was much lower than today, at 150/dollar; not to mention, 360/dollar when Nixon abandoned the gold standard in 1971. 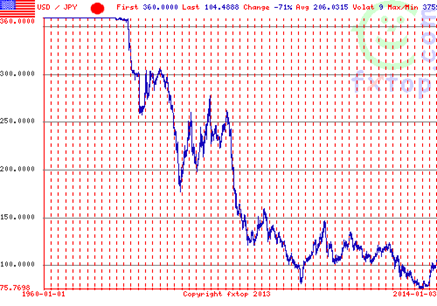 This is not to say the Yen will fall that far.  However, given the mounting debt, demographic, and inflationary issues, it is entirely possible the “worst-case scenario” befalls it.  If this occurs – which frankly, we’d place alarmingly high odds on, there’s no doubt Japan would experience a modern day version of hyperinflation – as the government desperately tries to “re-inflate” financial assets and indirectly repudiate debt.  No doubt, Japan’s $1.1 trillion of U.S. Treasuries would be aggressively liquidated, with demand for PHYSICAL gold and silver skyrocketing worldwide.  And even if the Nikkei “pulls a Venezuela” by surging higher, real losses would inevitably dwarf the fleeting nominal gains – just as in Weimar Germany, late 2000s Zimbabwe, modern Venezuela, and countless other fiat cultures; not to mention, what appears to be commencing here in the States.

In our view, Japan is one of numerous black swan possibilities in 2014; where unfortunately, the odds of catastrophic failure are rapidly mounting.  How long it takes for the Japanese Yen to implode – potentially, like the Kryptonian sun – is beyond our ability to predict.  However, there’s no doubt it’s coming; and if you haven’t prepared beforehand, it will be too late when it does.  And remember, the ENTIRE WORLD is now inter-twined by the U.S. dollar-based fiat currency standard; and thus, when one major component fails, everything fails.