Here are excerpts from a recent article written by Ted Butler:

Today I would like to step back a bit and highlight how we got to the outrageous position of JPMorgan cornering the gold market. Regular readers know that I have pinpointed JPMorgan as being the prime manipulator in gold and silver for going on five years, following the revelation from the federal commodities regulator, the CFTC, that JPMorgan inherited the massive concentrated gold and silver short positions of Bear Stearns in March 2008. That, plus verifiable data from the CFTC, in its published Commitments of Traders (COT) and Bank Participation Reports, clearly confirm my allegations of a market corner by JPMorgan in COMEX gold futures.

This may seem hard to believe, but JPMorgan’s current corner on the COMEX gold market is the second market corner in the gold market by this bank in the last nine months and among many prior corners over the past five years in gold and silver. JPMorgan is a serial market manipulator and now swings both ways in cornering markets, usually on the short side of markets until the current long corner in gold.

Based upon COT and Bank Participation Reports data, last December 4, JPMorgan had a net short position in COMEX gold futures of approximately 75,000 contracts. This position represented 20.5% of the true net open interest on that date (once 68,648 spread contracts were removed from total open interest of 434,416 contracts). On that date, the price of gold was $1700. While it is difficult for many (including the CFTC) to grasp the concept that a corner could exist on the short side of the market, surely no one would argue against a 20.5% concentrated share of a major regulated futures market by a single entity would constitute manipulation and a corner.

It was this corner on the short side of COMEX gold futures by JPMorgan that provided the incentive and led to the subsequent $500 decline in the price of gold into the end of June. On the historic price decline in gold over the first half of 2013, JPMorgan booked profits on their short side gold market corner (of over $2 billion in my estimate) and continued to rig prices lower in order to establish their current long side corner of 85,000 contracts, or 25% of the true net open interest in COMEX gold futures (minus spreads).

In a nutshell, a market corner is determined by the size of the position of the corner relative to the total market. In hundreds of previous articles I used the term concentration; but it seems to me that corner is a better description. What percent of a market is large enough to constitute a corner? Like pornography, a reasonable person should recognize it when he sees it. A good place to start is by comparing a concentrated holding relative to other markets, relative to the same market historically, relative to regulatory guidelines and relative to commonsense.

Regardless of how JPMorgan disposes and dissolves its gold corner on the COMEX, it should be good for silver. If JPM lets the gold price rip to the upside for great profit (as is most likely), I would expect silver to more than tag along for the ride. If the regulators gain some wisdom about their own data and some fortitude in going against JPMorgan’s gold corner, I don’t see the great danger for silver at current prices. After all, JPMorgan has no long side corner in silver to be ordered liquidated and we’re already below the cost of production for many silver miners.

I’m not sure what to root for. If JPMorgan is forced to divest its corner on the gold market that would be such a regulatory sea change that it would make it extremely unlikely that JPM would short aggressively on the next silver rally. I am still convinced that is the most important market consideration. A measured reading of the facts and circumstances suggests the gold corner could be the catalyst for my long-expected divorce between silver and gold prices. Make no mistake – this gold market corner seems almost from another world or time. If I didn’t see the clear evidence that it existed by virtue of the hard data, I’d swear it was impossible. Instead, we’re all going to witness how it gets resolved.

Bix Weir wrote the following on the same subject:

Word from Ted Butler is that JP Morgan has cornered the gold market. I mean CORNERED the entire gold market including physical and electronic forms of the shinny metal. There are a lot of scenarios that can happen from here INCLUDING the forced unwind of this position thus destroying the price of gold even further. They could also run the price up to the heavens and reap the rewards in order to SAVE their hides from their SILVER LOSSES.

There has never been a more important time to understand the difference between silver and gold as an investment. There is no doubt that SILVER will outperform gold by many, many multiples as the end of gold and silver manipulation ends.

Truthfully, I don’t know what the price of gold will do in the coming chaos. It might go up and it might go down but whatever gold does it will pale in comparison to the moonshot SILVER will take.

Today you can take your 1oz gold coin down to your local coin dealer and walk out with over 60 ounces of SILVER!

Tomorrow may be a different story.

Both Butler and Weir think silver is the way to go now.  Gold will do well, but silver is set to really take off.  By definition, silver is back into the bull market mode as it is up over 20% from the bottom.

Back to gold.  Gold bulls have the momentum and there are a lot of bullish factors in play right now. The demand is so strong in India that the government has banned the import of gold coins and levied a 10% tax on other forms of gold.  Where there is a will there is a way and the demand for gold there is so great that one way or another, the Indians will find a way to obtain it.  Smuggling is the leading alternative now.  Due to Indian government’s newly levied taxes and import ban, some of the demand has been directed toward silver.  This is a new source of demand for silver, a large source of demand.

Since when is JPMorgan wrong about gold and silver?  They have never been this long before (paper contracts) and they are now steering their clients into gold too.  They will benefit tremendously as the price of gold rises.  Remember, they are long now, not short.  They really don’t have any reason to stop the rise. 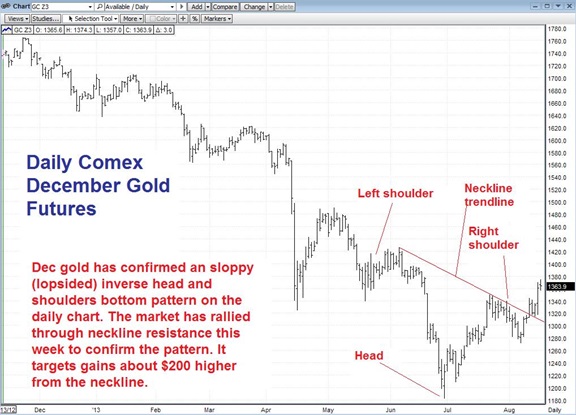 Bill Holter covered the JPM topic in depth, in his column today.  Bill and I are convinced that the bottom is in!  It’s in for both gold and silver.

On Sunday Jim Sinclair wrote, “The writing is on the wall. There is a major gold move at hand to challenge and surpass the recent major high.”  Sinclair says the bottom is in!  Yes, he called the bottom in March too, but the Gold Cartel threw cold water on his call by dumping six months global gold supply in less than 12 trading hours This is not the action of a “for profit” seller; it was the action of someone determined to crush the price.  Predictions won’t hold up, not even from “Mr. Gold” Jim Sinclair, against this kind of market manipulation, and there was no way to foresee it in advance.  I give Sinclair “free pass” on his March call.  I say he won’t be wrong twice in a row. 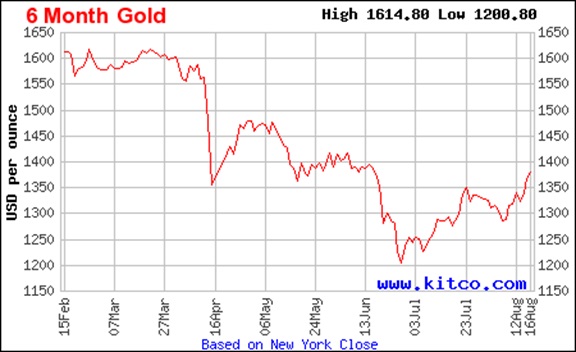 Gold has now recovered the losses from the second drop, the mid-June downturn.  Gold looks solid now – and silver is doing even better.  The physical demand seems to have finally gotten the upper hand on the paper markets.

It took a lot of short selling to force the price of gold and silver down this low, but now that the prices are turning back up, the shorts will have to cover and go long.

Bill Holter and John Embry are calling for gold to finish the year up another $300/oz.  Add me to the list and make it three of us.  Richard Russell is also bullish, but not quite that bullish.

I believe 1530 is a distinct possibility. Currently, it seems that there is a severe shortage of physical gold. In China and India, premiums are being paid for physical gold. China now surpasses India in total purchases of gold. Physical gold that is stored in the COMEX warehouses has about emptied the warehouses. Now that actual physical gold has turned bullish, I expect the rush to possess gold bullion will accelerate.

Now all we need is for Larry “I called the bottom” Edelson to endorse the bull market.  Recently he stated that he expected the bull market to commence by the end of September.  He may be late to the party.