Kamikaze Attack and the End of Mining

The trials of Job indeed!

To that end, I do not recall taking a day off from writing in the past two years – and given the horrific immolation the world’s Central banks are foisting on the world’s population, I don’t anticipate slowing down any time soon.  Following the past two days’ violent, post-FOMC precious metals attacks, my principal thought is not if, but when this “Cartel Suicide” yields an utter explosion of global physical buying.  That is above and beyond this year’s current pace of equaling last year’s record level – inevitably, catalyzing dramatic product shortages (especially silver), as we experienced in 2008, 2011 and 2013.

As I wrote in yesterday’s “BS to the Nth power,” Wednesday’s FOMC statement – in pretending to be “bullish” about the labor market outlook – was not just “misleading” and “disingenuine” but a flat out lie, ahead of Tuesday’s mid-term elections.  That said the fact their incremental words were not backed up by actions (they still expect to hold rates low for a “considerable time”) is all one needs to know about their true intentions – which in fact, even the beholden cheerleading MSM is starting to understand.

Meanwhile, amidst yesterday’s excitement of the “Dow Jones Propaganda Average” surging due to Visa’s “great news” that Americans are borrowing more than ever at usurious interest rates; as well as the “better than expected” GDP report, due solely to government “defense” spending to bomb ISIS; and the rehashing of a 12-day old rumor that Japan’s pension fund will increase its equity allocation in the most overvalued market since the internet bubble peak (care of the Bank of Japan holding debt yields near zero); interest rates actually declined on the day and didn’t budge overnight.

As for the day’s “other” news, which obviously the money printing, market-goosing algos don’t care about, they included the largest-ever increase in non-performing loans at the world’s largest bank, ICBC of China; an utter implosion of Greek stocks and bonds, as its inevitable default moves closer to the realm of imminence; and Citibank restating its earnings lower due to pending Department of Justice and CFTC “legal investigations.”  And don’t forget the “gold-negative” announcement (LOL) that one of Germany’s oldest banks has imposed an actual negative interest rate of 25 basis points on deposits above €500,000.  Considering that 20% of Europe’s banks failed the most passable stress test imaginable this week, how many investors will feel comfortable holding large deposits in German banks now – particularly when just last year, the largest German bank was deemed “so horribly undercapitalized, it’s ridiculous?”  Not to mention, foreign depositors, now that the ECB’s QE program has caused the Euro to implode?

Given all this wildly PM-bullish news – not to mention, as I write, September consumer spending “unexpectedly” declined whilst personal income barely rose (weren’t plunging gas prices supposed to fuel surging consumption increases?); TPTB were hell-bent on creating the opposite reaction.  To wit, not only did they need to foster the impression that the FOMC statement was “America-bullish” ahead of the elections; but with the upcoming “Save our Swiss Gold” referendum gaining momentum, the last thing they need is surging PM prices to positively influence sentiment.  That said, the physical reaction to their paper shenanigans was immediate, per this interview with Andrew Maguire – and the more they “push the envelope,” the more rapidly their “paper dominion” over price discovery will end.  To wit, the HUI is nearly down to its 2008 low, the TSX-Venture is dead and buried, and mining capital spending died years ago.  In other words, there has been essentially no incremental exploration spending for years; and in my 12½ years in the sector, exactly one major discovery – which, per this article, may never be developed.  Throw in indefinite delays in major developments the world round – the poster child being Barrick’s Pascua Lama project; and the outlook for global mine production has never been bleaker.

On last week’s “Miles Franklin Silver All-Star Webinar Panel,” we discussed the inadequate concepts of “cash costs” and “all-in sustaining costs”; as in the former case, few companies with “low” cash costs actually generate profits; while in the latter case, few companies with “low” all-in costs actually replace reserves.  Long-time readers know how vehemently I despise mining shares – and generally speaking, all “paper PM investments,” and this is exactly why.  Poorly managed, woefully undercapitalized, and operating in the world’s most difficult industry; with a Cartel not only suppressing gold and silver prices, but naked shorting the shares into oblivion.  And no company characterizes this misery better than the world’s second largest miner, Newmont Mining – which, in fact, inspired the latter half of today’s article title.

Newmont, whose stock is back to 2001 levels – when gold was $275/oz. – reported last night that 3Q earnings declined 50% year-over-year, despite an average gold price decline of just 4%.  And amidst the mining jargon, utilized to spin this earnings disaster positively is the irrefutable facts that one of the best capitalized gold miners not only generates an utterly miserable return on equity (worse if you consider last year’s $1.6 billion write-off), but is experiencing steadily declining production and a dramatically weakening reserve base.

As you can see below, Newmont’s proven and probable reserves are essentially the same as seven years ago, when gold prices averaged $575/oz.  This year’s production is expected to be 6%-11% lower than 2007; and given last year’s reserve write-down with a $1,400 gold price assumption, I can only imagine the killer this year’s write-down will be assuming prices remain near current levels.  Heck, as we learned last year, prices don’t even need to decline to yield write-offs – when the world’s sixth largest gold miner, Kinross, reduced its reserves by an astounding 33%, despite no change to its $1,200 price assumption.

Comically, Newmont claimed its “all-in sustaining” cost is $1,020-$1,080/oz., despite not increasing reserves over a seven year period in which gold prices more than tripled.  This year, capital spending was reduced by nearly 60% from 2013’s levels, and gold prices have declined further.  Thus, when reserves (and production estimates) are slashed again at year-end, be sure to have Newmont’s management explain how their business is “sustained” at $1,020-$1,080/oz.  In other words, such estimates are but a sham, as the real cost of sustaining the mining industry is far closer to the $1,500/oz. espoused last year by the CEO of Goldfields, the world’s fourth largest gold miner.

And now, for the main event – and perhaps, the denouement of the most vicious paper PM raids since 2008.  As I write at 9 AM EST, gold and silver are down to $1,162/oz. and $15.85/oz., respectively; in other words, so far below their actual costs of production, both cash and sustaining, that my recent estimate of a 25%+ drop in global PM production is likely far more imminent than inevitable.  This morning’s raids were, as usual, initiated at the 2:15 AM EST open of the London paper pre-market session followed by the 8:20 AM EST open of the New York COMEX, despite the aforementioned wildly-PM bullish events; in the latter case, due to “idiot longs” being forced to sell following gold’s breach of its “triple-bottom” level of $1,180/oz.  And I do mean fools, as why anyone would continue to fight the Cartel in rigged paper markets is beyond me.

However, I haven’t even discussed the former part of today’s article title, which could not be more PM-bullish – or “world-bearish.”  Which is that overnight, the Bank of Japan not only increased its “Abenomics” bond monetization target from ¥70 billion to ¥80 billion (in other words, essentially all government bond issuance), but tripled its Nikkei equity ETF buying program from ¥1 billion to ¥3 billion.  Global stocks are exploding higher – on the prospect of potential hyperinflation; yet interest rates haven’t budged and oil prices down to $79.60/bbl.  are on the verge of breaking below the July 2012 European sovereign crisis low of $77.50 – when Spanish banks were bailed out, and Draghi was forced to make his infamous “whatever it takes” speech.  Note bene, take a look at where Europe – and the Euro – are today, and tell me if you think he was “successful.”

Back to Japan, where everything negative we have ever written – from “demographic hell” (July 2012), to “final currency war” (January 2013), “the real Yen bomb starts – NOW” (May 2013) and “the Japanese Noose is tightening” (February 2014) are coalescing in a hyperinflationary crescendo, which must end in complete financial cataclysm.  To wit, if you think this chart depicting the unmitigated failure of U.S. QE is bad just think where it stands for Japan – now that it has been “QEing” for two decades with a 240% debt/GDP ratio, multi-year high in CPI inflation, and dramatically negative GDP growth; and oh yeah, another sales tax increase slated for 2015.  Yes, this is what the “weak yen” the Bank of Japan so desperately wanted has brought to the “Land of the Setting Sun”; well, that and a 140% surge in corporate bankruptcies since Abenomics commenced 18 month ago.  Actually, scratch that – as the 140% bankruptcy increase is just in 2014 alone! 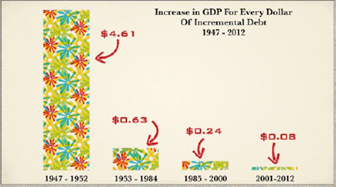 As I write, the yen has not only breached the long-time “line in the sand” of 110/dollar, but plunged to more than 112/dollar, down a whopping 2.6% today alone.  Before today, the Yen’s “real effective exchange rate” had already plunged to its weakest level since 1982.  However the financial death sentence Shinzo Abe has just unleashed on his population will make today’s Yen levels look like the “good old days” in hindsight.  Remember, the Yen traded between 200 and 300/dollar in the 1970s and 1980s – which is exactly where we believe it’s going now, enroute to being the first “first world” nation to experience 21st century hyperinflation.  And heck, I haven’t even noted this morning’s broad-based dollar surge – not because the U.S. economy is doing so well (LOL), but because global fear is causing a liquidity surge into the reserve currency.  Which, of course, we deem the “single most PM-bullish factor imaginable” due to the global inflation, currency wars and geopolitical tensions such devaluations cause.  Not to mention, the massively detrimental impact on U.S. corporate earnings of a “strong dollar.”

Again, we cannot emphasize enough our belief that we are back in “2008, with the temporary exception” of manically PPT-supported equity markets in TPTB’s desperate attempt to prevent universal recognition of what global economic data, commodity prices, bond yields, and the desperate actions of Central banks like the PBOC, Bank of Japan and ECB are screaming loud and clear.  For those holding mining shares and other “paper PM investments,” is to pray they are not permanently destroyed – which frankly, many already are.  And for those wise enough not to speculate in the world’s most naked-shorted securities; but instead, save in history’s only proven money, all we say is one word – RELAX.  Global physical demand was already sitting at all-time highs before this month’s Cartel paper raids; and now that the mining industry is all but destroyed, the upcoming production declines will be equally violent as the inevitable – perhaps imminent – physical demand explosion.

And once again, we at Miles Franklin ask but one thing of our loyal readers – which is to “give us a chance” to earn your business, should you decided to buy, sell, trade or store precious metals.