Frankly, it’s embarrassing that we have to speak so much of the Federal Reserve whose criminal machinations are rapidly catching up to the English crown in the race for which institution has caused more damage in the past thousand years.  Quite the doom considering the Fed’s only been around a hundred.  I’ll get to their uber-dovish statement momentarily; but first, let’s speak of the expanding horrors they’ve spawned from the four corners of the Earth.

I mean, Scotland is today deciding if it should secede from the UK after more than 300 years.  If the “yes” faction wins, the waning “British Empire” may be served a death blow with likely cataclysmic geopolitical consequences for a European continent already in dire financial straits, but the entire world.  Seriously, this is Braveheart type of stuff – as in seceding, Scotland would face significant near-term economic challenges; let alone, the wrath of a vengeful English government with a history of destroying anyone that threaten it.  For example, does anyone really think England won’t fight to the death for the North Sea oil fields Scotland claims?

Per Friday’s “secession movements gaining momentum,” the ramifications of the global fiat money cancer are as far-reaching and ruinous as those of the imperialistic British Empire of yore, and equally interventionist America of today.  As “Simon Black” of the Sovereign Man so brilliant observed, “human nature is highly resistant to change.”  And thus, just the fact today’s vote is occurring is a testament to how fed up people have become – particularly during what TPTB deem a “recovery,” featuring record high stock and bond prices; and in the UK, real estate prices as well.  Yes, the “99%” are angry – in Scotland, Catalonia, Venice and countless geopolitical hotspots in which revolution, civil war and economic impoverishment are inexorably expanding.

The past month alone, the so-called “dollar strength” we have soundly refuted – which, of course, has not dented Americans’ record cost of living – has caused such dramatic global currency devaluation – i.e., the “single most bullish precious metals factor imaginable – it’s inevitable “consequences” will be witnessed shortly.  In Japan alone, which we predicted would see the “real yen bomb” commence when the Yen finally broke below 105/dollar, has in just three weeks plunged from this “post-Abenomics support level” to nearly 109 this morning, partly due to its 41st straight monthly trade deficit but mostly “hot money” algorithms racing into dollars as a “safe haven” following this month’s escalation of the “final currency war” – featuring the ECB’s NIRP and QE announcements; China’s second QE announcement in six weeks; and the emerging consensus that when Abenomics ends in April, the Bank of Japan will be forced to “double up,” especially with a second catastrophic sales tax increase forthcoming.  Consequently, nearly all global currencies have plunged – in South Africa’s case, causing its Central Bank’s chairman to step down.  And as for the collapsing Euro, it will ironically catalyze the very inflation Goldman Mario so badly wants – before QE even starts!

Meanwhile, this morning’s first of the ECB’s six TLTRO or “targeted long-term refinance operation” tranches handed out $106 billion of nearly zero interest rate, two year loans to insolvent banks – proving the so-called “recovery” of bank balance sheets from the 2011-12 LTRO tranches was but a sham.  I mean geez, ask Portuguese depositors of Espirito Santo!  Yes, the ECB intends to ramp up its balance sheet at a Federal Reserve-like pace in the coming years, now that Draghi has been called on his July 2012 “whatever it takes” vow.  Just like the Fed’s QE, of course, the ECB’s money printing games will fail miserably; prompting the same Ponzi scheme response as every other in the long miserable history of central banking – to PRINT MORE MONEY.  But don’t worry, given that today’s “bubble party” is still ongoing, European markets are soaring this morning; as apparently, the ECB changed its voting committee rotation to eliminate its biggest “hawk” – Bundesbank governor Jens Widman – not that he’s actually done anything hawkish.  By the way, the Fed just did the very same thing for those that think “faster than expected” rate hikes are forthcoming.

The pressure to PRINT is growing, with this morning’s desperate IMF plea for the G-20 to take “decisive action” to promote “stronger more balanced growth” at this weekend’s meetings representing the perfect case in point.  This morning’s horrific Chinese housing data puts a further exclamation point on this desperation; let alone, equally ugly U.S. housing start figures.  But don’t worry, the chronically wrong industry propaganda machine called the National Association of Home Builders yesterday published its highest “sentiment index” in a decade – confounding all measures of actual housing market activity, such as the lowest level of mortgage purchase applications in 14 years.  In other words, the same kind of “island of lies” reporting demonstrated by this morning’s “record low” weekly jobless claims – following not only last month’s horrible NFP report, but the lowest labor participation rate in 35 years.  Quite amazing how many previously “reliable metrics” suddenly “broke” in 2008, huh? 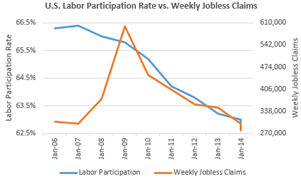 I’ll ignore the wildly PM-bullish news yesterday that Russia is deploying a full-scale, self-sufficient military unit to the Crimean peninsula; Congress approving the arming of “Syrian rebels” against ISIS, the House passing an “audit the Fed” bill, raging California wildfires amidst a generational drought, a Gallup poll showing Americans’ trust in mass media plunged to an all-time low, Goldcorp’s CEO proclaiming “peak gold” is NOW; and oh yeah, the opening of Shanghai’s International Board (physical gold contracts) today, eleven days ahead of schedule.

In fact, amidst the second massive paper PM smash since yesterday’s FOMC statement, China unveiled the “Shanghai Gold Benchmark”; clearly, in an effort to break gold from the grip of the evil Western Cartel.  Simultaneously, none other than the PBOC’s Chief Governor Zhuo Xiaochuan – i.e., Janet Yellen’s Chinese counterpart – stated flat out that gold is an “important part of financial markets.”  Picture Ben Bernanke lying to Ron Paul about not being money and consider what a powerful statement – and vision of the future – this is!

As for said “FOMC statement,” I want you to look long and hard at today’s title – i.e., “NOTHING!”  Yes, my friends, whilst the PPT goosed stocks and the Cartel naked shorted PMs into oblivion, Whirlybird Janet said absolutely utterly NOTHING!  In fact, not only did I view her comments – such as yet again, her front and center fear of the “significant underutilization of labor resources” destined to destroy our nation – as exceptionally dovish, but so did CNBC – which gushed at how accommodative the Fed clearly aims to be; and even Goldman Sachs, which always tows the party line of “more hawkish than expected.”  Heck, they even “tapered” monthly QE from $25 billion to just $15 billion instead of the “expected” $10 billion in an obvious back door effort to allow for not one, but two further “tapers” before ending QE.  And despite Jon Hilsenrath’s flip-flopping, they indeed kept the words “considerable time” in their statement, maintaining the aura of ambiguity of what a “2015 rate hike” means.  The Fed still expects future rate increases to be miniscule – how could history’s largest debt edifice handle anything more?; and, of course, remain as “data dependent” as ever.

Frankly, the only thing more comical than their perma-dovish stance – featuring but a handful of countertrend “buzzwords,” to keep the financial community on its toes – is the below chart of the correlation between the amount of “Fedspeak” and the size of its relentlessly growing balance sheet.  As for the embarrassingly blatant PM paper raids – first, when the statement was released and second, when Whirlybird Janet commenced her speech – I think we all know by now that FOMC statements represent the Cartel’s top “key attack event.”  So don’t worry, as not only was NOTHING incrementally hawkish said – as if they’d ever do anything hawkish, no matter what they say – but quite the contrary, regarding both the Fed and all Central banks. 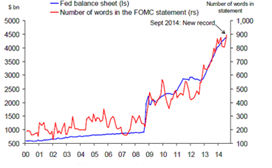 Again, we can only plead for you to ignore the historic level of misinformation as provided by Washington, Wall Street and the MSM.  Unprecedented market manipulation has created the largest-ever bubble in financial assets; and conversely, the largest-ever “anti-bubble” in PMs.  Fortunately, the physical market is the “financial world’s Achilles Heel”; and thus, TPTB must eventually lose.  Recall what we wrote above about this month’s expansion of Chinese physical PM trading, and ask yourself what will happen when the last $60 million of Shanghai silver inventory is inevitably – and likely, imminently, given silver’s production cost of $25-$30/oz. – bought. 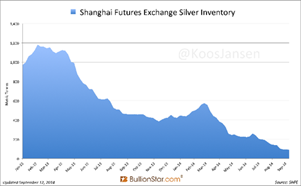