When the Glass-Steagall Act was repealed in 1999, Wall Street completed the process of taking over the U.S. financial markets; and with former gold bug Alan Greenspan heading the printing presses armed by the newly-formed President’s Working Group on Financial Markets and “strong dollar policy” (i.e., gold suppression) an era of unprecedented deregulation, speculation and fraud commenced.

Since then, the world has endured two major financial crises – in both cases, immediately following bubbles engendering belief in permanent economic bliss.  And care of Washington and Wall Street’s current “policies,” the path toward the next – and likely final – crisis is set in stone.  Combining their efforts with their equally corrupt, self-serving Western partners – not to mention “benign neglect” in the East – a cumulative effort to defeat “Economic Mother Nature” with money printing, market manipulation and propaganda has thus far failed.  Consequently, efforts to “paper over” such failures with heightened deception and fraud have been utilized.  However, the numbers don’t lie – and will continue to favor reality as the terminal phase of the world’s most suicidal fiat money regime plays out.  And thus we ask, where will you “place your bet” in the coming, volatile years?

Recently, the level of market control has become so overbearing; investors have essentially given up on “investing” – let alone trading such blatantly rigged markets.  After all not only are equity, fixed income, and real estate valuations in the stratosphere, amidst the worst global economic condition of our lifetime but volumes and volatility have plunged to record lows.  Consequently, the only remaining “markets” focus solely on leveraged speculation by “the 1%” with free ZIRP funds – yielding utterly incredible statics such as the aforementioned explosion in margin debt, record low implied volatility; and in the spirit of the Jordan Belfort of Wolf of Wall Street fame a veritable eruption of penny stock speculation.  Having watched the 2000 bubble first-hand and 2007’s from my perch in the blogosphere it’s hard to believe anything could approach the lunacy of those two eras of Wall Street-fueled excess.  But then again, we could never imagine the level of manipulation would reach such incomprehensible levels; let alone, the propaganda – such as this weekend’s duel slaps in the face to “the 99%”; first, when the “low inflation” touting Fed raised prices in its own cafeteria due to food prices “continuing to increase between 3% and 33%; and second, when the World Bank increased its estimate of the daily wage constituting “poverty level” by a whopping 42% or 78% since the turn of the century.

Better yet, we have a MSM largely in bed with Wall Street’s interests; although, frankly, such “partnership” appears to be on the wane given plummeting readership.  That said, the hope of “recovery” – and with it a return to the year 2000 “normal” remains a powerful elixir – prompting some of the most pitifully misleading and in many cases fallacious headlines imaginable.  Case in point, this morning’s top story on Yahoo! Finance – as supplied by Reuters – that “World shares hover near all-time highs” – “as the ECB made sure there was little doubt in investors’ minds that global liquidity will increase.”

Yes as precious metals were yet again viciously attacked at both the 2:15 AM EST open of the London “pre-market” session and the 8:20 AM EST COMEX open – naturally, on a PM options expiration day – the MSM was citing the day’s principal “catalyst” being Mario Draghi’s comment that the ECB…

What we need to be particularly watchful for…the potential for a negative spiral to take hold between low inflation, falling inflation expectations and credit in particular stressed countries” and “our responsibility is nonetheless to be alert to the risks to this scenario that might emerge, and prepared for action if they do.

No, no gold manipulation here – even if Barclays was convicted of such last week!  Yes, it’s completely normal for $450 million of paper futures to be dumped at the COMEX market open for no particular reason, following the $520 million “market sell” order that opened last Tuesday’s COMEX trading.

And thus, the war between an increasingly angered Economic Mother Nature and the “financial Nazis” on Wall Street rages on.  Despite so-called Fed “tapering” and the economic “recovery” that only ambiguous, compromised, statistically insignificant “diffusion indices” can purport – in stark contrast with real data like durable goods, industrial production, labor participation, household income, savings, wages and capital investment which tell an entirely different story – the dollar and nominal interest rates remain mired at multi-year lows whilst oil and food prices indices are stuck at or near multi-year highs.  In fact, the most comically perverse lie of all is the non-stop propaganda that inflation is not only “below 2%,” but “expected” (by the Fed) to average 1.9% in the coming years.  How convenient given its current “target” is exactly 2.0%!  Just this morning, for instance, the U.S. “consumer confidence” report purported an average customer inflation expectation of 5.6% over the next 12 months compared to last month’s expectation of 5.5%; in both cases a far cry from 1.9%.  To that end, we assure you Europeans think no differently on this front; and thus, the “thin ice” supporting the Fed’s and ECB’s fraudulent expectations couldn’t be more fragile.

As for said “recovery,” clearly Europeans don’t agree with that assumption either – which is why in this weekend’s European Parliamentary elections, anti-Euro, anti-austerity parties had a very strong showing.  Cumulatively, Europe’s economy is at its post-2008 low; in nearly all nations across a broad swath of categories from GDP growth to unemployment.  This is why Draghi is likely to step up the printing presses next week just as Japan did last year and the PBOC – which this weekend admitted to housing bubbles in portions of China – will likely do the same following its recent devaluation of the Yuan.  And as for the United States of Deterioration how better can I describe its “recovery” than this morning’s “better than expected” durable goods print of – drum roll please – a whopping 0.8%; based on a 13% increase in government defense orders offsetting a 3% plunge in private machinery orders?

As we discussed earlier this month, no matter what lies the government publishes the market is starting to realize “recovery” is but a myth; which is why it is ”betting” on increased QE by relentlessly buying Treasury bonds – “taper” and all.  Frankly, this article bespeaks the horrific economic outlook as well as possible in describing the horrific situation faced by the collapsing U.S. retail industry which just reported one of its worst earnings periods since the turn of the century and faces a veritable avalanche of bankruptcies, store shutdowns and layoffs over the next decade.  To wit, there’s reason U.S. gasoline consumption is literally collapsing; and we assure you, it’s not due to an explosion of hybrid-electric cars.  More likely it’s due to the aforementioned implosion of “the 99%” – coupled with accelerating weakness in global trading activity as evidenced by April’s largest monthly decline since 2009.  And again, we assure you the burgeoning political and economic war with China won’t help matters either – as symbolized by the Chinese government this week banning its corporations’ from utilizing U.S. consultants; not to mention Windows 8 operating systems and IBM mainframes, among others.  Oh and did we mention the accelerating trade war with Russia which is solidifying its ties to China as powerfully as we are to the collapsing “European empire.”

Of course, the war against “Economic Mother Nature” doesn’t just concern business activity and financial markets but the ill-fated, historically disproven attempt to suppress gold and silver as the “barometers of bad tidings” they are.  Each day paper prices are pushed lower, the end of the mining industry itself looms larger; portending massive physical shortages in the coming years, as demand surges further from 2013’s record highs.  “All-in” sustaining costs for the worldwide gold industry are closer to $1,500/oz. than today’s $1,270/oz. – if one listens to the CEO of the world’s sixth largest gold miner, Gold Fields – whose stock is down 72% since TPTB decided gold’s 2011 rise to record levels was not to tolerated.  And as for silver, which at current prices may not have a mining industry at all in the coming years, there’s not a doubt the true industry-sustaining price level is closer to $30/oz. than today’s $19/oz. 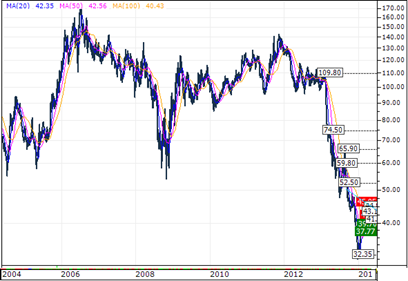 To wit, there’s no better proof of just how difficult it is to mine gold – particularly at near record energy prices which comprise at least 20% of operating costs – than the fact that the world’s deepest manmade structure by double the second largest structure is a gold mine; which cost $2.5 billion to build in South Africa over the past five decades and would probably cost at least $10 billion today.

Thus there’s a reason PM production is literally collapsing in countless global regions; let alone South Africa, which at one point was the world’s largest gold producer but today is just an also-ran, en route to outright immateriality.  This morning’s news that Gold Fields itself experienced the second mining-related miner fatality in the past ten days only validates this thesis further; and we assure you, demand has nowhere to go but up – particularly now that the BJP Party has ousted the anti-gold Congress Party in India; i.e., the world’s largest gold consumer. 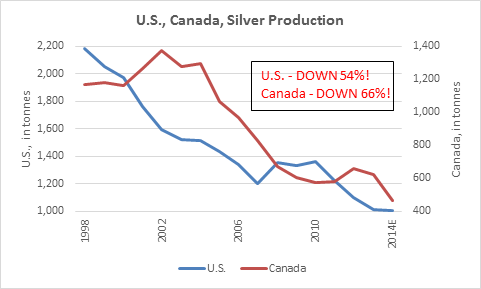 Throw in the fact that said “supply” in many cases doesn’t exist and yet again, it makes the odds of “Economic Mother Nature” being usurped by Wall Street appear that much longer.  To wit, this weekend Austria has joined the ranks of Western nations asking for an audit of its official gold holdings; in this case supposedly held at the Bank of England.  I mean if the December 2011 headline that the Fed and Bank of England were selling gold to suppress the price was not followed by a reported decline of their respective gold holdings than who did they steal it from?

Oh well, that’s enough for today.  Hopefully, today’s journey through easily refuted Wall Street, Washington, and MSM lies helps to empower PM holders further; and for those that have not yet “placed their bets,” to enable a decision process heavily skewed in the favor of real money, at the expense of the fiat fraud currently being perpetrated.  As always, Miles Franklin is here to answer all your questions – at 800-822-8080 – with a broker team averaging nearly two decades of experience having thrived for a quarter-century based on a culture of customer service and fair dealings.