Coincidentally, the two books I am reading regard the same topic; i.e., the human response to catastrophe.  In Stephen King’s The Stand, said reaction is elicited by a plague that kills 99% of the population.  However, in the other book I am reading – which I will disclose in the coming weeks, as it is about to be published by a faithful Miles Franklin Blog reader – humanity is challenged by the “Cataclysm” caused by a global currency collapse.  Hopefully, these worst-case scenarios do not play out similarly; but sadly, the latter event is mathematically guaranteed.  Which is why, when it comes to the protection of your financial assets – with real money – it’s better to be safe than sorry.

On to this week, when “Yellenomics” will be unveiled in the aftermath of yet another hideous employment report.  Or should I say unemployment report; as the more we observe, the more we realize just how horrific – and structural – the U.S. employment decline has become.  And thus, when Yellen ambiguously speaks tomorrow morning of the “recovery” ongoing since 2009, consider what actually occurred in January, excluding BLS “seasonal adjustments.” That is the economy actually lost 2.9 million jobs, as opposed to the 113,000 reported gain; a loss, by the way, exceeded only once in U.S. history – in January 2009; i.e., smack in the middle of the global financial crisis.  As for Pollyanna’s focusing on the parallel-published “Household Survey” – desperately seeking “good news” – it did in fact report a 638,000 job gain.  That is, until you strip out said “seasonal adjustments” – dropping it to an actual loss of 403,000.  Either way, John Williams of Shadow Stats says BLS “adjustments” have not only rendered NFP employment data statistically insignificant, but not even comparable month-to-month!

And thus, if Janet Yellen attempts to purport a “job recovery” – which in and of itself, would be quite an accomplishment, following the past two miserable NFP reports – she will be decidedly lying.  And if you still don’t believe us, take a gander at the below charts, depicting how just little U.S. consumers have “recovered” since Helicopter Ben took over the printing presses in 2006.  As you can see, real household income has been in freefall ever since – but don’t worry, the “1%” is doing just fine; is the personal savings rate, on the verge of breaching 2008’s all-time low.

Worse yet, the average workweek for low-wage jobs – i.e., paying less than $14.50/hour – plunged to a record low of 27.4 hours in December.  Remember, under current BLS reporting standards, essentially any part-time job is considered the equivalent of a full-time job; and thus, as the average part-time job entails less and less hours – and consequently, pay – remember to incorporate such data into such jobs propaganda.  And oh yeah, take a guess why part-time jobs are being shortened by employers.  Yep, Obamacare – which incentivizes employers to reduce workweeks; thus, causing fewer employees to qualify for health insurance benefits.  This issue is particularly acute at Walmart – America’s largest employer – where only those working more than 34 hours per week are considered “full-time.” 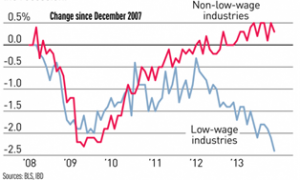 Then, of course, we have the “new employment paradigm”; in which the majority of incremental workers are of the part-time, low wage persuasion due to the offshoring of nearly all high-paying manufacturing jobs over the past two decades.  The only real job “growth” has been seen in the non-productive healthcare “industry,” and the “higher education” scam depicted in the timeless, must watch documentary, “College Conspiracy.”  Now that Obamacare is about to destroy the healthcare industry, who knows what will become of the recently enormous pace of healthcare employment growth?  And as for the college scam, take a look at this damning chart of student loan accumulation – mostly, from the government; and tell us which way you think the “higher education” employment trend will head. 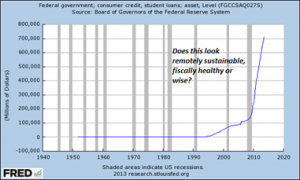 Last but not least – if you weren’t terrified enough – here’s the coup de grace, driving the last stake into the heart of those still believing the job market has “recovered” since 2008.  Below, behold the two incidences of the U.S. “unemployment rate” falling from 10.0% to 6.6%; the first, from 1983-86 and the second from 2009-14.  In the former instance – when high-paying manufacturing jobs were still plentiful, no less – nearly all incremental, working age citizens entered the labor force.  Conversely, in today’s destitute society, not only is population growth much faster – care of unchecked immigration; and the aforementioned, high quality jobs nearly non-existent; but just 15% of incremental, working age citizens entered the labor force.  And thus – to Janet Yellen, the BLS and others purporting “recovery” – we say to you, case closed.

Before we get to today’s main topic, we have a few more items to discuss.  For one, the 50% Bitcoin crash over the past two weeks – culminating in this morning’s 80% “flash crash.”  Whether “crypto-currencies” gain traction in the coming decades, we have no idea.  However, as discussed three months ago, they will never replace gold and silver as real money; and even if they eventually become ubiquitous, crypto-currencies will likely undergo every imaginable “growing pain” beforehand.

This week alone, the world’s largest Bitcoin platform – Mt. Gox, headquartered in Tokyo – halted withdrawals indefinitely, pending resolution of what it deems a security breach enabling the “hacking” of accounts and ‘disguising’ of transfers.  Better yet, the Russian government banned usage of Bitcoin; a major, Bitcoin-assisted money laundering arrest was made in Miami; and Apple abruptly blocked the popular Blockchain app from being utilized on its products.  Thus, for those thinking you can “save yourself” with Bitcoin, we simply say thus – think again; and in the name of full disclosure, I myself own 1.1 Bitcoins – out of pure, morbid curiosity.

Last but not least, get ready for this quarter’s mining earnings catastrophe.  Mind you, I’m making a judgment about the outlook for mining stocks, per se; as regarding that topic, long-time readers know my view well. Irrespective, per this article, get ready for enormous, industry-wide write-downs of the so-called reserves held “in-ground.”  As we’ve discussed ad nauseum, gold and silver prices have been pushed well below their respective costs of production – as demonstrated by the fateful, June 2013 quote from Nick Holland, CEO of Goldfields (the world’s fourth largest gold miner) that the mining industry cannot be sustained below $1,500/oz.  Which, per below, is why Barrick – the world’s largest gold miner – was using a $1,500/oz. price assumption.

Barrick CEO Jamie Sokalsky told investors the company will use a U.S. $1,100 price to calculate its unmined gold, down sharply from the $1,500 price assumption used to calculate last year’s reserves.

That could slash more than 10% from the miner’s stockpile of 140 million ounces of gold in the ground.

Toronto-based Barrick will also record another write-down on its troubled Pascua Lama mine in the Andes, and likely take additional impairment charges on mines that have become too expensive to run.

Agnico Eagle Mines is expected to also cut its reserves, after using a $1,490 price assumption for mines with shorter life.

Vancouver-based Goldcorp Inc., too, is expected to cut its reserves.

Kinross may record another write-down on one of its mines; and Iamgold said it will produce less gold at higher costs.

Not only that, but such news is being released simultaneously with final 2013 demand figures, depicting China for the first time exceeding more than 1,000 tonnes of (published) imports.  Heck, “Mr. Gold” himself – Jim Sinclair – has actually become wildly bullish on silver; in fact, going so far as to favor it over gold in the near-term, per this must read commentary from Miles Franklin’s Bill Holter – who watched Sinclair speak this weekend.  And speaking of Sinclair, his “five golden pillars” have never appeared more relevant; which is even more “ominous,” given his current view that gold prices would be more properly valued at $50,000/oz. than $1,650/oz.

And finally, regarding today’s principal topic – I refer you to “prediction #4” of Miles Franklin’s “2014 predictions”; i.e., that “gasoline prices will resume their historic march to record levels.”  In it, we forecast that surging, global money printing would find its way into the price of items we “need versus want” – none more so than energy.  Oil prices were NEVER as high in late December as in late December 2013; and now, following Friday’s surges of WTI and Brent crude to $100/bbl. and $110/bbl., respectively, never have oil prices been this high in early February.  Not to mention – “weather” or otherwise – the recent explosion in U.S. natural gas prices to multi-year highs, causing the average gas utility bill to surge 30%-40% from year-ago levels. 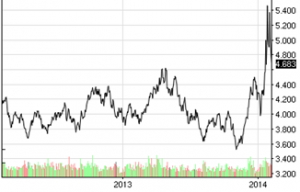 And remember, per “prediction #4,” surging energy prices are not just a U.S., but a global phenomenon; as energy prices in both Europe and Japan – among others – are already at or near record highs; just as new rounds of “QE” are starting to be discounted by various financial markets.

And thus, on a day where gold has surged past $1,275/oz. despite the 25th “Sunday Night Sentiment” attack in the past 26 weeks – with “Whirlybird Janet” on tap to commence “Yellenomics” tomorrow morning, all we can say is this.  Do NOT bet against the vicious, society-killing forces of inflation; and for gosh sakes, PROTECT yourself with real money – while you still can!