Given the dramatic, unrelenting, over-the-top counter-intuitiveness of this month’s Cartel raid, I feel compelled to write.  Part of my motivation is education – at clients’ greatest moment of need; and part of it, simple mental therapy.  After all, when one is forced to deal with the monotony of the EXACT same attack patterns, day after day (note the daily, vertical declines)…

…whilst “favored” assets are propped by the EXACT same PPT algorithms (such as the past three days’ “dead ringer” algos at the key round number of Dow 17,000)…

…one can understand how despite the ugliest geopolitical, economic and financial environment of our lifetimes, equity sentiment could reach multi-year highs – whilst, incredibly gold sentiment falls to its lowest level since the bottom of the 2008 crisis and nearly the bull market’s 2000-01 starting point! 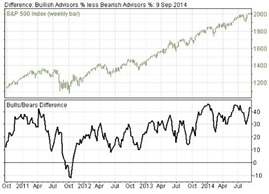 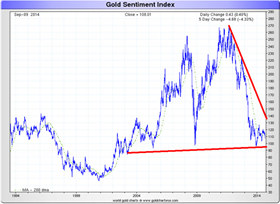 Yes, the Cartel’s “start the fall” attacks have been particularly galling; as in the two weeks since Labor Day, the list of global “horrible headlines” has never been broader or more intense.  Given collapsing economic data to the ECB’s QE announcement, an ugly August NFP report, and expansion of Western sanctions against Russia, America’s “ISIS destruction” strategy, and the Sino-Russian plan to create a competing money transfer mechanism to U.S.-led SWIFT. Free market trading would have yielded significant PM appreciation particularly with both metals trading well below their costs of production and Shanghai silver inventories down to mere fumes.  To that end, Shanghai is now a larger trading and delivery hub for silver than the COMEX, and will get a further boost when new trading platforms are introduced September 29th.  Shanghai Silver is in severe backwardation, with inventories down to a mere $55 million – from $800 million when the April 2013 “alternative currencies destruction” paper raids commenced.  And thus, our guess is “something’s gotta give” sooner rather than later.

Will “something” occur due to a black swan event?  Or Wednesday’s FOMC meeting?  Or Thursday’s Scottish independence referendum?  Or the “single most bullish precious metals factor imaginable”; i.e., the broad global currency collapses that continue this morning?  Or simply, the massive weight of 43 years of fiat printing fraud?  We don’t know other than that it mathematically must – and likely, “sooner” rather than “later.”

Regarding the Scottish referendum, it reflects the expanding instability resultant of more than five years of economic and financial collapse – in many cases, yielding draconian government responses.  In a word, the people are angry – as despite government engineered financial market appreciation, the average person is in a significantly less favorable economic position.  And nowhere is this more evident than in Europe; where a toxic combination of bureaucracy, socialism, indebtedness, unemployment and stagnation has brought the continent to an historic crossroads.  The past three years’ bail-outs, “bail-ins,” unprecedented election results, and “unconventional” monetary policy are just the “warning shots”; as ultimately, what I wrote in August 2011’s “Unprecedented” has never appeared more prescient.

A major contributing factor to the future of Europe, is that it is NOT homogenous.  This currently unrealized, or better put ignored, trait will become mainstream shortly.

The Eurozone is comprised of 23 countries, each of which had its own currency, language, and culture centuries before creation of the Euro in 1999.  When economic times were good in the early 2000s, the ruinous fiscal policies of the PIIGS were obscured by more responsible members such as Germany, Finland, and the Netherlands.  Germany’s obsession with creating a unified monetary system clouded its judgment, allowing the PIIGS to rot the system from the inside out, and now that economic times have turned bad (is that an understatement of what?), they are realizing just how blinded they allowed themselves to become.  Consequently, the Eurozone system is on the verge of collapse, and frankly I’d be shocked it if survives another 12 months.

During these bad (and worsening) times, the separate cultures of these disparate countries are shining right through, particularly as relates to their finances but also the myriad cultural rifts previously hidden under the surface.

What I am not so subtlety intimating is my belief that the U.S., like the Eurozone and the U.S.S.R. before it, will eventually break up into numerous countries.

The Eurozone itself will be fought for “to the death” by the bureaucrats running it, and Central bankers doing “whatever it takes.”  However, when “whatever it takes” simply constitutes printing money, said policies will, ironically, act more to destroy the union than save it.  However the monetary union will be broken long before the Eurozone itself; as a growing list of nations and municipalities determine that freedom, no matter how painful it may be, is more desirable than the oppression of Europe’s careless, reckless centralized leadership.

In Scotland – where the outcome of Thursday’s independence referendum is highly uncertain freedom from England’s financial tyranny and desperate foreign policy will give a proud people the opportunity to government themselves for the first time in three centuries – per a close friend, a long-time U.S. citizen born and bred in Scotland.

Sure, Scots see the pros and cons – and bumps in the road if the vote is yes; but this is a time for them to take ownership, and live with a decision that will feel they made themselves.  If I was back in Scotland I think I would err towards the ‘yes’ – time to stand up and own your identity; and wear it with pride.  As a group of people, Scots still share a common identity/culture that no longer exists in most parts of England today due to the open door immigration policy of governments over last ten years or so.

However, in many other nations, nationalism is one of many equally relevant factors.  As they say, “it’s the economy foolish”; and thus, the prospect of escaping oppressive financial rule, or trading partners that have morphed into economic and financial anchors will likely be an equally powerful secessionary force.

Of course, it’s not just sovereign nations we’re referring to but municipalities as well – not just in Europe but the world round.  Record low political approval ratings – from Europe to Japan to America – indicate the broad level of disenfranchisement six years of brutal recession, inflation and unemployment have taken.  Italy’s government has collapsed three times in the past three years, France’s Francoise Hollande just fired his entire candidate, as an ultra-right nationalist has taken the lead in Presidential polls, and the neo-Nazi “Golden Dawn” party has become a formidable presence in Greece.  Meanwhile, the wealthy Spanish province of Catalonia – responsible for 25% of Spain’s tax revenues – has its own independence referendum scheduled for November; whilst the Italian province of Venice – responsible for 10% of Italy’s GDP – held a similar referendum in March, in which the vast majority favored independence.  In some cases, revolution is just as possible as secession – as in Spain, home of 55% youth unemployment, where more than a million protesters took to the streets of Barcelona yesterday.  Such issues are far from contained within Europe; and to the contrary, have been on display this year in nations as diverse as Turkey, Thailand, Brazil, Argentina and Brazil – with more to come, as global economies and currencies continue to implode.

And the upshot of “secession movements gaining momentum” from an economic perspective?  As you can imagine, the dislocations, delays and deferrals of even a Scotland/UK breakup would be significant; let alone, if a major nation seceded (or was expelled from) the European Union.  Not to mention, the general business uncertainty such movements cause; and oh yeah, the dire monetary impact of crumbling nations and unions.  In fact, one of the leading secession catalysts will undoubtedly be escape from the unpayable debts caused by “economic hit men,” as in Greece.  Thus, debt defaults and potential hyperinflation of newly introduced currencies will not only become clear and present dangers in directly affected areas, but fears of such events unfolding in other regions will become acute as well.

This is why, among countless other reasons, the need to protect one’s assets with at least a modicum of physical gold and silver has never been stronger.  Do so now, before the first dominoes start tumbling; or potentially, regret such inaction for decades to come.