Thursday and Friday were very bad days for gold, silver and the shares.  The explanation on Wednesday afternoon and Thursday was because the Fed discontinued QE 3.  Along came Friday and guess what, the QE baton was passed to Japan as they announced an increase in their QE operation to roughly the round number of $1 trillion per year.  With this amount of QE, the Bank of Japan will now be purchasing every single bond issued and then some.  Outright monetization has arrived in Japan!

This was seen all around the world as “good” for stock markets as they rallied to new highs (Japan rallied to 7 year highs)!  …but bad for precious metals?  Yes I understand, this is “good” for the dollar on a relative basis to other fiat currencies (especially the yen) but how is the news of outright and full on monetization in the 3rd largest (and Western) economy bad for “stuff”?  The answer to this question is “it’s not …but it has to be seen this way.”

THE worst performing market (excluding the ruble) was silver, down some 7% or so after the Fed announcement from Wednesday afternoon to Friday’s close.  We have seen this before in late 2008, April of 2011 and 2013.  Maybe someone can rationally explain to me “why” silver would do this with the current backdrop?

We know the cost of production for silver is north of $20 per ounce, one big producer, First Majestic even announced they are withholding nearly 1 million ounces of production due to current prices ($19 when they made the announcement).  I bring this point up because it is not like all of a sudden the supply increased and a producer or producers had “extra” millions of ounces to unload.

Over just the last two weeks, the physical silver market has clearly tightened.  As the price was dropping, our suppliers went from no “wait” to a waiting period of 1-2 weeks on many products from generics to Maple Leafs… and this was as of Friday morning, let’s see what happens this week with the further push down in prices, will the delivery periods extend further?  I would also add that premiums demanded for physical silver product had been rising slightly prior to Wednesday and jumped markedly on Friday, will we again see a $9 COMEX price yet none to be had physically at $15?

Why is the supply tight you might ask?  The answer is simple, because demand has increased (coaxed by lower prices) and is now outstripping the supply and ability to fabricate enough supply.  An example of this would be Silver Eagle sales for October, the mint sold more Silver Eagles than any other “non January” month in its history!  They sold 5,790,000 in October, higher than the 5.35 million ounces sold in March of this year, annual sales for the year look like they’ll be a record. 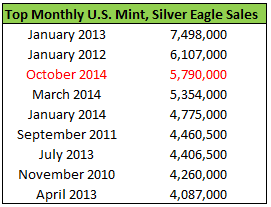 So the open interest rose by 15 million ounces in just one day, what does this mean?  Did someone have an extra 15 million ounces that they just “HAD” to sell at four year low prices?  Did someone suddenly come in to an extra 23 million ounces that they would like to deliver in December?  No, of course not, what happened is “contracts” that did not exist on Wednesday morning were “opened” and the trade initiated by sellers.  Do they have to actually have the silver?  No, anyone who has the money to put up as margin can sell as many contracts as they wish.  No product necessary, just cash as collateral for margin and in the case of the December contract, they can sell an additional 12 days of global supply.  Please understand that when silver, real silver enters the physical market place …it is used.  It is used in jewelry, it is used in industrial processes like high tech gadgets, solar panels and the like, and it is even used for many medical purposes also.  Oh, and let’s not forget “coins” and bars, the U.S. mint alone will use maybe 8% of global production for Silver Eagles and the Royal Canadian mint about the same …so right here we are talking about 15%+ of total global production being spoken for!

My point is this, if real silver was being sold by panicked investors we would see a glut of product.  Silver would be sloshing around everywhere and falling off of trees like autumn leaves, it’s not.  Again the silver market has gotten tight and there are “wait” times for delivery.  This is not explainable in any way possible if the price of silver (and gold) were truly “made” or set by a free market, they are not.  I was always taught that if you sold something you did not have and could not obtain to settle the deal, it was fraud.  In my opinion this is exactly what you are seeing in silver.  More silver is “promised” than actually exists.  If you look at the COMEX and their own numbers, they claim to have 1/10th the amount of registered and deliverable silver than is promised just one month out!  I believe we are now at a critical price point where if the paper shorts push any further, they will unleash a tsunami of demand which actually breaks the casino and shows whether it is real or fraudulent.

I wrote an article two months back entitled “Kill Switch?” that hypothesized it might be China or Chinese proxies who are the “longs” standing so tall in the December silver contract.  We only have 1 month left to find out.  By then, we will have gone through the U.S. elections and the Swiss gold referendum.  Are our markets being “held up” in the hopes of swaying voters to “stay the course” with a Democratic rule in the Senate?  Is gold being pushed down to scare the Swiss into believing gold is a “bad thing” and a weak portfolio sister?  Is a low oil price being used as electoral propaganda?  Maybe, maybe not, in my opinion they are both linked as weak gold allows or “helps” promote stronger paper asset prices.

As I have written before, I believe the Chinese are the ones long in COMEX silver who refuse to leave, sell or exit.  The losses to the longs are well in excess of $20 billion, over $1 billion on Thursday and Friday alone. Who has the pockets deep enough to sustain losses like this?  Who has pockets deep enough to post the margin calls …just from Thursday’s action alone?  Let alone absorb another 12 days of added global production …even if it’s just on paper.

To finish, I will repeat my thoughts of the last several months.  I believe China is fully aware of the bankruptcy of the West’s financial system.  I believed China had accumulated at least 8,000 tons of gold (I may be way low on this per Alisdair Macleod, more on this in my previous article), they have built out infrastructure to the point of even building ghost cities with their own functional but not used (yet) airports.  They have accumulated zinc, nickel, copper, oil, you name it, in amounts far more than they currently need.  They have bought assets all over the world and have spent dollars to do it.  They have been on a mission since 2008 to turn dollars into “stuff” wherever they could, because they know.  They know the dollar is toxic and if they don’t exchange them prior to the bankruptcy becoming public, they will be left holding a worthless asset.

As for the situation in silver, if I am correct and it is the Chinese who are record long the December contract, do the Chinese really believe they will receive silver?  Of course not, they can see the published inventories are not even close to sufficient, they may not even believe the published figures.  I still believe this position is only a switch they can flip when and if they wish or even the leverage as a threat to flip it.  We will find out soon enough but the open interest rising to such heights with the price dropping to such depths has never happened before in any market that I know of, something very very different is happening and it looks like December is the focal point!  We will see.