It’s another Friday morning; and thus, another “day off” from writing.  However, given how evident it is becoming that the end game of history’s largest Ponzi scheme is approaching, my mind is afire with thoughts.  And thus, I spent last night compiling my thoughts – and nearly two years of data – for this very important article.

Yesterday, we wrote of the “Palpable Fear” evident in TPTB’s desperation to hold precious metals down, no matter how suicidal such actions will be in the long-term, when production collapses and demand explodes.  Equity prices, too, must be supported at all costs to maintain the façade of “recovery” and QE “success.”  Of course, as David Stockman brilliantly relates, the only reason such manias are even possible is the money management business’ most important unwritten rule – i.e., “thou shalt not be short when the market is rising.”

I learned this “adage” first-hand as a NYC hedge fund analyst during the “irrational exuberance” years of 1996-98.  And today, with record low bond yields and record high stock valuations – amidst the worst economic fundamentals in generations – it’s truer than ever.  Frankly, portfolio managers must buy U.S. Treasury bonds when the “global arbitrage” opportunity between record low yielding German Bunds and Japanese Government Bonds is so large, in a yieldless world where portfolio managers will buy anything to gain yield, no matter how risky.  By the final stage of such manias, investors start to believe their own BS about “new valuation paradigms” and the like; but per the eye-popping quote below from 2007, such delusions always end in tears.

It is hard for us, without being flippant, to even see a scenario within any kind of realm of reason that would see us losing one dollar in any of those transactions.

Today’s historic financial bubbles, which by all imaginable metrics put 2000 and 2008 to shame, will end tragically – either via “black swan” event or implosion under their own weight.  And given how blatant TPTB’s efforts to foster them have become, it wouldn’t surprise us one bit if the universal “realization of reality” they so desperately fear occurs in the very near future. To wit, the unprecedented, egregious suppression of precious metals prices on a 24/7 basis, such as this week’s comedy of blatant attacks.

Recall Wednesday afternoon, when we were propagandized that the July 30th FOMC “minutes” were somehow “hawkish” – when in fact, there was not a shred of incrementally hawkish commentary.  In fact, the so-called “yield surge” that resulted was a whopping two basis points – likely aided by Fed manipulation – lasting a full hour before dissipating.  Yesterday, rates plunged anew, despite so-called “bullish” economic data like the “surging” Philly Fed diffusion Index – which, in reality, was yet another example of first-class data manipulation, per Zero Hedge.

Philly Fed has beaten expectations for 6 months in a row with its biggest surge since the 2009 lows. Against expectations of 19.3, Philly Fed printed 28.0 – highest since March 2011 all-time highs. All sounds awesome right? Umm, no, 7 of 9 internal declined including – New Orders tanked, Employment tumbled, Prices Paid plunged, and Prices Received slumped. So, in case you were wondering how it is possible that Philly Fed surged given such internals, the 6-month forecast index (“hope”) just surged to 22-year highs.

And thus, when rates plunged irrespective, with the benchmark 10-year Treasury yield down to 2.39% as I write, it couldn’t be clearer that the “most damning proof yet of QE failure” was rearing its head again – i.e., falling rates amidst so-called “recovery.”  As it turns out, not a single analyst – and certainly not the Miles Franklin Blog – anticipates this morning’s “Jackson Black Hole” speech by Janet Yellen to be hawkish, revealing just how transparent the Cartel’s past two day of paper PM attacks have been.  The so-called “uber-hawk” James Bullard, President of the St. Louis Fed, just made the following uber-dovish comments this morning – yet again, finding an excuse to “move the goalpost” of Fed rate hikes into the distant future.  But don’t worry, he says, the FOMC is “doing a lot more work” on their mythical “exit strategy.”

Just hours before Whirlybird Janet and Goldman Mario’s destined-to-be-disappointing speeches, recall what we wrote last month in Coincidence of how…

…historically, the Cartel tends to ‘pre-empt’ expected PM surges – for example, when they know a particularly dovish FOMC statement is coming – with vicious paper raids.

Will today’s speech turn out to be the end of yet another blatant PM suppression – which has pushed both metals to extremely oversold levels, amidst their most bullish outlook in memory?  We don’t know, but with prices trading well below the cost of production, the cost of insuring one’s assets has never been lower.

Which brings us to today’s primary topic, of how “sixth sigma” PM suppressions are becoming as common as sunshine in August.  In our view, there is no reason TPTB would be this vigilant if they weren’t deathly scared of something destroying the status quo; potentially in the very near future.  And said “vigilance” couldn’t be more evident than the relentless, sentiment-crushing PM raids we have seen during nearly every day’s “off hours,” as we wrote last week.

Yesterday represented the Cartel’s 60th straight “Sunday Night Sentiment” attack, while today’s “2:15 AM” raid was the 281st in the past 317 trading days.  In both cases, the odds are not even in the realm of “sixth sigma,” with the latter expected to naturally occur every quintillion trading days.  And heck, if we calculated the odds of gold falling every day at the 6:00 PM EST open of the ultra-thinly traded “Globex” paper platform, for at least the past year, they would be significantly higher.

To that end, we looked at nearly two years’ of PM trading data, arbitrarily choosing April 2013 as the starting point.  After all, that was when Obama’s “closed door meeting” with TBTF bank CEOs yielded, just a day later, the biggest PM smash of the past 15 years.  That is just after meeting participant Goldman Sachs issued its infamous “aggressive short sale” recommendation.  As you can see below, we looked at both the 4:00 PM EST “NYSE aftermarket” open, and the 6:00 PM EST open of the “Globex” paper trading platform – i.e., an ultra-thinly traded market that operates while not a single physical exchange is operating.

As you can see, the first trade after the NYSE closes – in the equally thinly-traded “aftermarket” session that lasts from 4:00 PM EST to 5:15 PM EST – has been lower 66% of the time over the past 16 months.  Meanwhile, the opening trade of the Globex session has been lower 73% of the time – and during two of the last three months, more than 90% of the time.  In fact, the rare times we actually do see higher prices, they are minute gains, nearly always following large losses during NYSE trading hours.  In other words, the Cartel are sitting on prices more than ever, feeling the need to not only do so during trading hours, but off hours as well.  Trust me, said “sentiment-crushing” machinations have a profoundly negative impact on the human psyche; but only in the near-term, as ultimately, such petty nuisances will be overcome by a wave of buying so powerful it will put 1979 and 2011 to shame. 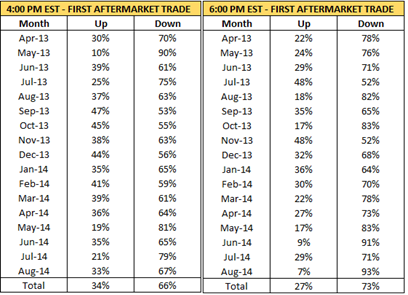 We could list countless other such “petty nuisances” if we had the time – such as GLD/SLV attacks in the last minute of NYSE trading – but we think you get the picture.  As noted above, care of manipulation and the resulting inertia, not a single financial market current reflects it true fundamentals.  However, no matter how hard TPTB try, “Economic Mother Nature” will ultimately win out.  Sadly, the collapse of such Ponzi schemes and manipulations will likely cause the world to be a scary place in the not so distant future, unlike any witnessed by Westerners in generations.  However, here at the Miles Franklin Blog, our job is protect you from it.