Lots to get to today, as aside from my daily topic, I feel it imperative to commentate on the recent, “counterintuitive” market action.  With so many cataclysmic political and economic events occuring simultaneously, TPTB have gone into “manipulation hyperdrive” in their ongoing, inevitably doomed task of maintaining the façade of stabilty, “recovery,” and “low inflation.”

And no example of such “ball juggling” could be more evident than the past two days’ “hail mary” equity rallies, coupled with vicious Paper PM “caps and attacks” – ironically, marking the one-year anniversary of last year’s “alternative currencies destruction” raids – when gold and silver were violently attacked to quell burgeoning PM sentiment.  Not so coincidentally, last year’s blatant April raids yielded Miles Franklin’s best day of 2013 – just as yesterday’s equally transparent raids yielded its best day – by far – of 2014.

Let’s start with global equity markets, which were on the verge of a major, well-deserved decline.  The Fed-generated equity bubble was finally starting to collapse upon itself, as the weight of historically high valuations, record margin debt, and blind, momentum-based speculation reminiscent of the late 1990s, amidst an environment of dramatically weakening global economic activity, created a “perfect storm” of equity weakness.  In fact, the only missing component was the fact that the Fed had successfully engineered the benchmark 10-year Treasury yield from 2.80% before last week’s horrific NFP employment report to 2.61% yesterday morning, care of “back door QE,” via miraculous “Belgian buying” that only a blind man can’t see.  Again, we can’t emphasize enough how realistic the premise of our “3.0% – Nuff’ said” piece is; as the Fed simply cannot allow rates to rise without triggering an immediate, catastrophic economic collapse.

That said, equity sentiment was getting pretty until – even more “miraculously” – Monday’s swoon was rescued by a violent PPT “hail mary” rally; exceeded only by yesterday’s more blatant support operation – again, when the “market leading” NASDAQ fell below the key round number of 4,000.

Keep in mind, the reasons underlying this month’s tech stock plunge – aside from the aforementioned, bubble-like characteristics fostered by five years of unfettered money printing, market manipulation, and propaganda – were rapidly escalating Ukrainian tensions and miserable global economic data.  Thus, how comical can it be that the “market” suddenly reversed sharply when a report emerged of the Japanese government preparing to dramatically reduce its economic outlook?  Yes, we’re supposed to believe that “news” that an economy that saw an unprecedented 25% retail sales decline over the past two weeks – as the government imposed a crippling 3% tax increase, amidst surging inflation and plunging income – caused global equity markets to surge? 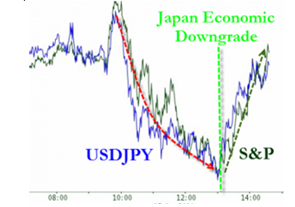 Oh, that’s right, such “sudden bullishness” must be due to the expectation of expanded global QE announcements.  I mean the last time the Russell 2000 – an index composed of small, highly speculative stocks – fell below its 200 DMA was December 2012, causing the Fed to immediately announce its $85 billion/month “QE3” program.  And since Japan’s “Abenomics” has been such a “success,” clearly the BOJ is about to expand it, causing unending, global stock market gains.  Right?  Actually, not really – as given surging Japanese consumer inflation, amidst plunging incomes and corporate earnings, the BOJ has pinned itself into a corner, fearful that further QE increases could catalyze a catastrophic loss of confidence in the Japanese government, currency and bond market.  But let’s not allow reality to get in the way of good propaganda, OK?

In fact, a consensus is rapidly growing that the BOJ cannot expand Abenomics any further, due to the aforementioned ramifications; and thus, it doesn’t take a “rocket scientist” to realize the reason the “market” reversed yesterday was nothing but PPT intervention – as was the case Monday, when no “Japan economic weakness” news coincided with the late day “Hail Mary” rally.  Better yet, can someone explain why PMs plunged in the same market conditions that caused them to (albeit, in capped manner) surge the past three days?  Not to mention, if equities suddenly rocketed higher at 1:00 PM EST anticipating increased QE, why didn’t gold and silver do so as well????

Of course, the answer couldn’t be simpler – as yet again, the Cartel was “doubling up” its “market calming” manipulations; in supplementing the vicious, nonsensical equity rally with a violent Paper PM raid commencing at 8:27 AM EST, seven minutes after the COMEX open, and three minutes before the publication of wildly PM-bullish CPI and Empire State Manufacturing data – per the below Zero Hedge commentary.  And heck, how much more “telegraphed” could this have been – as it was just a day earlier when Goldman Sachs reiterated its ridiculous, self-serving $1,050/oz. gold prediction just as it did last year, two days before the aforementioned “alternative currencies destruction.”

It seems the two words “fiduciary duty” are strangely missing from the dictionary of the new normal’s asset management community. This morning, shortly before 8:27 am ET, someone decide that it was the perfect time to dump thousands of Gold futures contracts worth over half a billion dollars notional. This smashed Gold futures down over $12 instantaneously, breaking below the 200DMA and triggered the futures exchange to halt trading in the precious metal for 10 seconds.

Fast forward to today, where the overnight news was even more PM-bullish; as China’s GDP growth came in well below expectations, prompting calls for increased PBOC stimulus amidst a cratering trade balance and crashing housing bubble.  In the report’s aftermath, the Yuan fell to a new multi-year low which will not only accelerate Chinese inflation, but negatively impact the entire Western world’s competitiveness.

As always, PPT-supported stock markets rocketed higher – while the Cartel used residual “technical weakness” to continue attacking paper gold and silver, at the same times as usual; in gold’s case, creating a “battlefield $1,300” in the same manner as silver’s current “battlefield $20.”  Of course, in doing so, they are catalyzing massive physical demand – as we experienced at Miles Franklin yesterday – as evidenced by significant futures market backwardation.  And as Bill Holter so presciently points out, the ability to maintain “weak PM sentiment” after prices have clearly bottomed – amidst a wildly bullish fundamental environment, no less – will clearly be a difficult task for a Cartel that has expended most, if not all of its manipulative “ammo” in pushing prices below their respective costs of production for more than a year’s time.

Let’s get to the real reason we write this blog i.e., presenting the long-term case for holding physical precious metals as insurance against the inevitable hyperinflation of all fiat currencies.  Given that the first 599 such regimes failed, it makes logical sense that the current 180 will as well – particularly as, for the first time in history, they are all anchored together, by equally unbacked “derivatives.”

In today’s terrifying political and economic climate, the reasons to hold gold and silver are too numerous to list.  And thus, we like to stick to “the basics,” as discussed in “The Most Important Reason to Own Precious Metals” – which, of course, are led by the price inflation of items we “need versus want.”  In other words, food, energy, healthcare, and other items necessary for survival.  These are the first items that Central bank monetary inflation funnels into, which is why those that spend the highest percentages of their incomes – such as citizens of the “Arab Spring” nations – are the first to be affected. We have expended a tremendous amount of “digital ink” on the topic; particularly in recent weeks, as global food prices have gone berserk due to a combination of Central bank “QE” programs and historic droughts in major producing regions like California and Brazil.

On a global basis, food prices are closing in on all-time highs as we speak.  However, here in the United States, the near-term outlook is far more dire – as the prices of many major food items – from beef, to pork, milk, chicken, and shrimp – have surged to all-time high levels.  Not to mention, gasoline prices are approaching their own all-time highs, and we’re not even in the peak driving season.  Heck, my wife and I decided this week to switch most of our diet to vegetarian dishes; except, unfortunately, due to the aforementioned droughts, vegetable prices may well rise more than meat! 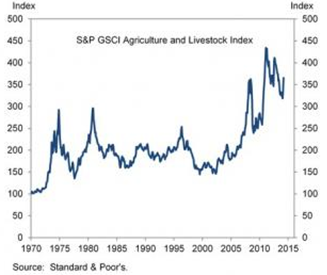 Of course, when one caclulates the total impact of “inflation,” it’s not just consumer prices that should be considered.  Yes, they are a major component, but it’s amazing how the giant pink elephant in the room – i.e., the costs of a rapidly expanding “taxation nation” – are not discussed as well.  In “Californ-inflation,” for example, we noted how the costs of creating a habitable environment in the desert has caused California’s taxes to be the nation’s highest.  And similarly, the cost of funding the “dependency nation” America has become will quite obviously put it among the world’s highest taxed nations in the coming years.  In other words, as we have repeatedly stated, if we want (or better put, need) to become the Socialist States of America, our already sky-high taxes, fees, and surcharges must increase to levels seen in other socialist regimes – such as Canada and most of Europe.  Remember, such reductions in one’s purchasing power are NOT incorporated into the already suppressed, government-generated CPI figures; and thus, the myth of “low inflation” becomes even more embarrassingly incorrect under such circumstances.  Below, for instance, is a list of simple income and estate tax changes in 2013 alone; which, particularly for the “wealthy,” are like inflationary daggers through the heart.

But this is just a small sampling; and as demonstrated by the incredible 442 tax increases Obama alone has thus far proposed – including draconian, European-style taxes on gasoline – the likelihood of such a total socialist transformation occuring sooner rather than later is extremely high, not withstanding political “assurances” otherwise.

I can make a firm pledge. Under my plan, no family making less than $250,000 a year will see any form of tax increase.  Not your income tax, not your payroll tax, not your capital gains taxes, not any of your taxes.

As the U.S. economy continues to crumble, whilst the inflationary pressures caused by ceaseless money printing accelerate, Congress will become more vigilant in its quest to commandeer the nation via onerous taxation and regulation.  This has been the case in essentially every dying regime throughout history, and particularly those with out of control printing presses.  And thus, the reasons to PROTECT one’s life’s savings from the resultant inflation – and potentially, hyperinflation – with the only assets proven to do so throughout history, are rapidly mounting.

Never before have such reasons been so powerful, and never before have PM prices been so “subsidized” by suppression, in an environment where it’s still legal to purchase them.  At some point soon, the entire world will realize this and when it does, it will be too late to protect yourself as such.  And thus, if you consider this possibility while supply still exists, we hope you’ll give Miles Franklin a call at 800-822-8080 – and “give us a chance” to earn your business.