That “Other” Reason to Own Gold

As the global economy sinks more rapidly – and irreversibly – into the abyss, we are faced with a rapidly accelerating pace of “horrible headlines” to report on.  Today is no different; but in choosing my initial focus, there isn’t even a “distant second” to my winner; which, of course, is the 25% plunge in Twitter stock this morning, following an utterly horrifying earnings release.

Laughably, the “good news” was that Twitter only lost $511 million in the fourth quarter.  However, what the Street was utterly shocked to see was that Twitter’s user growth – both in the U.S. worldwide – essentially ground to a halt.  Why this would surprise anyone is beyond me; as frankly, this societal blight would benefit humanity by permanently disappearing.  And given it has been one of the NASDAQ’s “leaders” since its November IPO, it doesn’t bode well for a stock market already in disarray.  In other words, yet another reason for Janet Yellen to reconsider “tapering” in the very near term; perhaps, as soon as Tuesday morning’s Congressional testimony.

Of course, Twitter is just a novelty, with absolutely zero economic impact on anyone but Justin Bieber, Katy Perry, and the like.  Yesterday, Bill Holter wrote of how amazing it is that Facebook is one of the world’s most valuable stocks – given not only its ridiculous valuation, but inconsequential economic presence in the grand scheme of things.  However, compared to Twitter, Facebook is General Motors, IBM, and Google combined!

Which brings me to GM, if you can excuse the blatant segue.  Yes, GM, which spent decades destroying itself, and cost taxpayers $15 billion to bail out; all while becoming a bloated also-ran in the global automotive business.  Today, less than two months after the government sold its remaining shares, GM massively missed its earnings estimates – by a whopping 24% – as results in essentially all operating regions were disappointing.  And thus, it should surprise no one that its “channel stuffing” activity in January was the second most in company history.  In other words, even last year’s explosion in subprime auto loans is no longer yielding increased sales.  Recovery, my arse!

As for said “recovery,” today’s economic data again demonstrated otherwise.  To start, the Challenger layoff report surged 47% sequentially, and 13% from a year ago; led, of course, by the imploding retail sector.  Next, the U.S. trade deficit was nearly 10% above expectations due to plunging exports; likely, yielding a spate of upcoming, downward GDP revisions.  And finally, the irrepressibly weak Bloomberg Consumer Comfort Index declined another 1.3 points, to -33.1.  I don’t think there’s a better measure of the real economy; as this metric was last positive when the internet bubble burst 14 years ago, and only barely reached the breakeven level before the 2008 financial crisis!  And slightly off topic, per what we wrote yesterday regarding the immaterial economic impact of this winter’s weather, take a gander at this damning article; demonstrating how – over the past 62 years – there has been essentially ZERO correlation between winter snowfall and job creation. 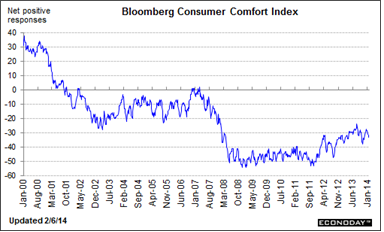 Over in Europe, the ECB actually held rates at the laughably low 0.25% level; offering no material insight other than that it continued to anticipate exceedingly low rates for a long period of time; with near-term economic risks clearly skewed to the downside.  “Goldman Mario” also averred the ECB’s intention to act swiftly and decisively if needed, utilizing a broad range of policy tools; like overt QE and negative deposit rates.  Given the all-out collapse we are witnessing worldwide – in Spain, for instance, per the below chart of its housing investment index – it’s difficult to believe the ECB will be able to “hold off” on such initiatives much longer.

Before we get to today’s topic, a note on this morning’s “trading.”  Emerging market currencies are essentially flat, with European stocks higher and the “Dow Jones Propaganda Index” rescued for a second straight day by blatant “POMO” support at 10:00 AM EST; and apparently, per the ominous chart below, heightened expectation of increased Japanese QE – per what we discussed Tuesday.

As for PMs, it was nothing short of a miracle – as gold and silver were NOT attacked at 2:15 AM EST for the second straight day.  However, despite all the PM-positive news noted above, the Cartel was as viciously vigilant as usual once the COMEX opened; having attacked for no conceivable reason at exactly 8:20 AM and again at the 10:00 AM close of the global physical markets.  They are clearly more terrified than ever; particularly regarding silver, which continues to be stopped each and every time it attempts to close over $20/oz.  In the long run, the more they attempt to cap it, the more violent the breakout will inevitably be; and thus, we patiently wait.  And remember, per what we discussed yesterday, JP Morgan is now more LONG physical silver than any entity ever – including the Hunt Brothers!

As for the topic du jour, we continue to harp on the fact that not only are Precious Metals real money – in a world of fiat trash; but actual commodities, with defined production costs.  We have long discussed how monetary fundamentals are more PM-bullish than at any time in generations – if not ever.  However, equally importantly, the “downside potential” in gold and silver prices is extremely limited, as both metals are trading well below their production costs.

In the case of silver, we have written quite often on the topic – such as this article from August; as clearly, the world’s largest silver miners have marginal production costs ranging from roughly $22/oz. to $28/oz.  And as for gold, we have long highlighted this June 2013 quote from the CEO of Goldfields – i.e., the world’s fourth largest gold miner – discussing how the “all-in” cost of not only maintaining profitability, but growing reserves, requires a gold price of at least $1,500/oz.

Today, even the blatantly anti-gold “World Gold Council” published a report noting how “all-in” production costs were around $1,200/oz.; and thus, a drop below this level for a “sustained period of time” would have a “significant effect” on production.  The difference between Goldfields’ $1,500/oz. estimate and the WGC’s $1,200 is quite material; but clearly, the former number is the more relevant.  In the case of the $1500/oz. figure, it estimates the cost of actually increasing reserves; while in the latter case, I’d be surprised if $1,200/oz. even enables the maintenance of current reserves.

Either way, even the WGC admits that at least 30% of all global gold production is unprofitable below $1,200/oz; and thus, if the Cartel were crazy enough to attempt such a plunge – which would be quite the accomplishment, given the state of the global economy and financial condition; the resulting mine closures and production collapse would debilitate the industry for years, just as global demand reaches all-time highs.

As a long-time energy analyst, I can tell you from experience how difficult and costly it is to “un-mothball” shut-in wells.  However, such hurdles are piddling compared to what miners would have to deal with – given exploding costs, expanding permitting, environmental and taxation issues; and of course, the giant pink elephant in the room.  That is, the utter lack of qualified geologists and engineers in an industry that has purposely – and suicidally – been kept largely unprofitable for the past decade-plus.

And thus, for those “scared” of the Cartel, the relentlessly anti-PM media, and doomsday newsletter writers, I ask you to put on your “investing hats” – and realize that even in the “worst-case scenario,” the traction these entities combined can get is extremely limited, due to “that other reason” to own gold and silver.

To wit, we want to share a quote with long-time portfolio manager – and Precious Metals bull – Bill Fleckenstein.  As we approach the END GAME of global currency and economic collapse, mainstream fear of real money has never been more palpable.  This is why the “evil Troika” of the MSM, Wall Street and Washington has been so viciously anti-gold in its propaganda – and market manipulation; and thus, from a “contrarian” standpoint, why there has NEVER been a better time to protect oneself with PHYSICAL gold and silver.

I don’t recall in my 30+ years in this business seeing anything as universally and violently hated as gold.  But I think a lot of stock bulls believe that gold is their enemy.  In other words, if gold goes up, then the Cinderella story can’t come true.  And of course it (the Cinderella story) can’t.  But I was surprised at just how hated and threatened people seemed to be by the price of gold.  It just goes to show you that all markets have a huge psychological component.