The Cheapest “Numismatics” Around – Revisited

I’m no statistician – and god knows, in rigged markets like Precious Metals, such “analysis” must be taken with a grain of salt.  That said, the Cartel’s unrelenting attempts at “technical analysis busting” are decidedly less successful during bull market phases – as we are in NOW; then in bear market phases, like mid-2011 to late 2015.  And nowhere more so than early 2011, when the “COTs” were blown out of the water despite a massive paper short position, which forced them to cover all the way up to $50/oz silver.  In fact, were it not for the biggest manipulation operation in history – the May 1st, 2011 “Sunday Night Paper Silver Massacre” – the world may as we know it may be decidedly different today.  And heck, it took another two years of “named storm” attacks – like September 5th, 2011;s “Operation PM Annihilation I”; December 7th, 2011’s “Operation PM Annihilation II”; February 29th, 2012’s “Leap Day Violation”; and April 12-15th, 2013’s “Alternative Currencies Destruction”; to finally slow down the PM bull.  Only to watch prices bottom in late 2014 in the majority of currencies, and in late 2015 in U.S. dollars.

During these four short years of misery – although they seemed endless for Precious Metal bulls, particularly those holding “paper PM proxies” – all the Cartel inadvertently “accomplished” was a worldwide run on above-ground inventories; annihilation of the (long-term) mining production outlook; and an explosion of physical demand, to all-time highs.  This, as the global economy plunged to its lowest level since the Great Depression; whilst debt exploded, and money printing went parabolic.

As for said “technicals,” it doesn’t take rocket science to see that silver – trading at $16.15/oz as I write Tuesday morning – is on the verge of breaking out of a massive “head and shoulders bottom,” going all the way back to last summer, after having completed its “golden cross” (50 DMA rising above the 200 DMA) two weeks ago.  Will it do what historically, prices have done in perhaps 90% of such situations?  We’ll see, but if fundamentals have anything to do with it, I’d upgrade such “odds” well above 90%.

To that end, on a morning where headlines such as “average German bond yields below zero”; “Brazilian Presidential impeachment process commences”; “IMF supports Central banks’ move to negative interest rates”; “small business index unexpectedly plunges”; “Bernanke says helicopter money may be the best available alternative”; “IMF again cuts global forecast, as it warns of secular stagnation”; and countless other “wildly PM-bullish, everything-else-bearish” headlines, the prospect for Precious Metals prices have never been rosier.  Nor, for that matter, have their valuations ever been so far below “fair value.”  Which is probably a major reason why the Fed and President held “emergency meetings” yesterday.

Realizing, of course, that the Cartel’s sole goal is to make such forecasts “look bad” – in its unrelenting attempt to influence popular opinion via (increasingly futile) manipulation – I think it’s fair to “toot my horn.”  Not that I’m the only person to say such things; but the fact remains that the “PM community” has been its own worst enemy for as long as I’ve observed it – from those that simply don’t get it; to those “churning” clients; to the biggest sin of all – not understanding, and communicating, the fact that the primary reason to own physical Precious Metals is to PROTECT and INSURE oneself from monetary disasters that mathematically must occur.  As opposed to “paper PM proxies” – let alone, when traded, as opposed to invested in.  Which, like the rest of the massively manipulated paper markets, are rank speculations.  Which, I might add, can be extremely profitable if done successfully; and devastatingly unsuccessful if not.

Again, my “analysis” is geared solely toward helping people to understand such manipulations, so they don’t lose sight of the physical forest through the paper trees -NOT to help them “trade” metals, paper proxies, or any other markets.  And in that respect, I believe I have been highly successful – such as, against an avalanche of “popular opinion” in the PM community, demonstrating that the vaunted “COTs” are far more of a fear-mongering “paper tiger” than an actual deadly threat – particularly in bull market phases like today; and double particularly when one’s goal is to buy-and-hold actual physical metals; as opposed to trading paper proxies.

To that end, I explicitly detailed such views in “the COTs no longer matter, part II” on March 16th, and “about those COTs” on March 28th.  Moreover, I don’t think anyone else has written of the importance of the pending secondary offering of the Sprott PSLV closed-end bullion fund – as predicted in March 7th’s “Admiral Sprott rides again!”  And lo and behold, since the pricing of said offering Thursday night – in a decidedly powerful statement of surging institutional demand (which I first discussed in February 22nd’s “institutional gold and silver demand, the final piece of the puzzle”) – the price of silver has surged from $15.05/oz to $16.15/oz, or 7%.  Which is why, the second the deal was announced Thursday afternoon, from my hotel room in Cancun, I penned “PSLV secondary offering – a major blow to the Cartel.”  And putting the “exclamation point” on the Cartel’s current state of CHAOS, one of Zero Hedge’s top stories this morning is “silver surges to eight month highs, as hedgers unwind.”  Yes, “hedgers” – as in the COTs that started massively covering their COMEX silver shorts two weeks ago; and currently, are in major scrambling mode, as they attempt to draw a “line in the sand” at the top of the “right shoulder” of said “head and shoulders bottom.”  Which, as noted above, is going to be MUCH more difficult to do now that we are in a bona fide bull market phase, with the forces of monetary doom encircling them like rabid vultures.

And it’s not just me that’s given physical Precious Metals investors the right advice, but Miles Franklin as a whole.  And no more so in our recommendation, for as long (27 years) as we’ve been in business, to avoid “numismatics” unless you truly understand them, and are willing to speculate on their objective “non-melt” value.  Let alone, the wide spreads, weak liquidity, and countless other factors that “load the deck” against nearly all numismatic investors; typically, in favor of bullion dealers that generate large sales commissions – despite, in nearly all cases, hurting their clients.

That said, Miles Franklin has been emphatically bullish about numismatic products, or “semi-numismatics” like modern day limited edition series’, if they are purchased at little – or in some cases, zero – incremental premium over generic coins.  And nowhere more so than the Royal Canadian Mints’ silver Wildlife and Birds of Prey series, and gold Call of the Wild series.  In each case, we have aggressively marketed them as soon as they were issued, when trading at barely any premium over generic gold and silver Maples.  Most recently, in February 22nd’s “gold roaring grizzly and silver cougar predator, the cheapest semi-numismatics around” – at which point, this is what the premiums looked like for the Wildlife, Birds of Prey, Call of the Wild, and brand new Predator series’ looked like. 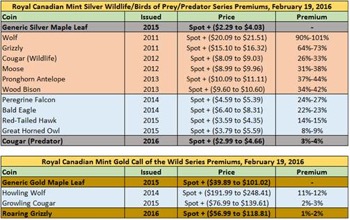 That was seven weeks ago, before the Precious Metals bull phase had yet been confirmed.  And during those seven weeks, as the gold bull market led, the gold Call of the Wild coins had a significant premium surge – of five percentage points for the Howling Wolf, which was discontinued a year ago, and two percentage points for the Growling Cougar, which was discontinued, well, seven weeks ago.  The Roaring Grizzly still trades at just a 1%-2% premium to generic gold Maples, but will only be sold until next February.  And like the Howling Wolf and Growling Cougar, they are the only .99999 fine gold coins available that we are aware of. 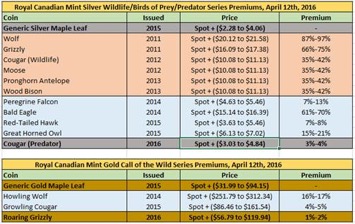 As for silver, the new Cougar Predator, of which just one million ounces will be sold, still trades at just a 3%-4% premium to generic silver Maples.  However, as you can see by the performance of the prior ten such series’ – over a five year period – the likelihood that this premium will rise in time is quite high.  Not to mention, in buying it today, the most important part of the “trade” – silver itself – is near its lowest levels in six years, with its best fundamentals in generations.

In other words, we at Miles Franklin continue to believe the gold Roaring Grizzly and Silver Cougar Predator are the “cheapest semi-numismatics around.”  To that end, if you have any questions about them, please call us at 800-822-8080, or email me personally at [email protected].