The Death Knell of Tapering

It’s another “where do we start?” morning; and thus, before unveiling the chart guaranteeing the upcoming, permanent end of “tapering,” we feel obligated to update you on the various, seemingly endless “horrible headlines” spanning the globe – each of which, in their own rite, should have you not walking, but running to your phones to protect yourself with real money.

To start, we want to focus on surging energy prices again, per what we forecast via “Prediction #4” of our “2014 Predictions.”  This morning, WTI crude is above $103/bbl., well above its three-year average of roughly $90/bbl., and on the verge of making a run at the three-year high of $111/bbl. – last reached in the Fall, when a Syrian attack appeared imminent.  Moreover, natural gas prices are nearly $6/mcf; and for those attempting to attribute this surge to “the weather,” I’ve got a newsflash for you (particularly given my ten years of experience as an energy analyst); i.e., it’s always cold in the winter!  Moreover, as we wrote last week in “Mother Nature’s had enough,” this year’s winter weather, on average, hasn’t been particularly cold on an historic basis.

In that article, we noted that this year’s diminished winter air travel is decidedly NOT due to weather-related cancellations and delays; which frankly, are way below historical averages.  Conversely, the real issue is plunging economic activity; as since the pre-financial crisis peak in 2007, the number of scheduled U.S. flights is down 10%.  To that end, so is overall U.S. gasoline demand; in fact, exactly 10% lower than 2007 as well.  And thus, when not only are gasoline prices nearing all-time highs on an absolute basis – and on a seasonally-adjusted basis, already at such levels for the past three months – it should serve as a blaring siren that something is very, very wrong.

Given the stormy winter weather – which no doubt slowed automotive activity; the horrific holiday shopping season; plunging global economic data; and a supposedly “strong dollar” caused by plunging emerging market currencies (although you wouldn’t know it from the Euro-dominated “dollar index,” which sits at exactly the Exchange Stabilization Fund’s long-term, maniacal support level of 80.0); one would expect plummeting crude oil and gasoline prices.

Instead, prices are rocketing higher; such as at my local service station here in the low cost gasoline state of Colorado, where it jumped overnight from $3.32/gallon to $3.52/gallon.  Of course, the pump actually says $3.42/gallon now; as in recent months, gas stations throughout the area have stopped posting the real gasoline price in lieu of the newly fabricated “cash price”; i.e., what you’ll pay if you use cash.  Clearly, surging credit card fees are a factor in this marketing stratagem; but for my money, I’d bet it was principally motivated by the desire to prevent customers from being scared away by “sticker shock.”  Gas stations are clearly hurting from the aforementioned demand plunge; and thus, are using every imaginable gimmick to save their flagging businesses.

But don’t worry, Washington and Wall Street continue to say the economy is “recovering.”  Don’t pay attention to the aforementioned, empirical evidence; or this morning’s catastrophic housing data, depicting a 5% weekly plunge in mortgage applications, to a 19-year low; and an 11% collapse in January housing starts, representing the largest monthly plunge in three years.  Worse yet, take a look at these damning charts if you still believe the aforementioned PROPAGANDA that the recent housing decline is due to “the weather.”  As Zero Hedge beautifully puts it, “it’s almost as if nobody even wants to put any effort into the lies anymore.”

Adding to the economic misery is the inevitable default of hundreds of billions of student loans; which recently surpassed $1.1 trillion, amidst exploding delinquencies, historically weak job prospects – and oh yeah, a complete lack of dis chargeability.  And guess who’s going to foot the bill?  Yep, the U.S. taxpayer – as the government not only owns and originates most mortgage loans these days, but student loans as well.  But don’t worry, those degree-bearing graduates that actually find jobs may see a modest increase in their ‘poverty wages’ to $10.10/hour, care of unconstitutional executive decrees like the one announced the day of the politically-charged State of the Union address.  The only problem – per below – is that the government’s own analysts predict such laws will cost the nation 500,000 jobs over the next three years.

As for the rest of the world should I focus on the ongoing Thailand bank run?  Or how about the all-out civil war breaking out in the Ukraine – resulting in the Russian Ruble plunging to a new all-time low this morning?  What about the 60,000 Italians marching on Rome today, calling for “greater action to save the millions of small- and medium-sized businesses employing almost half the country’s workforce?”  Or U.S. Treasury Secretary Lew writing a letter a letter to all G-20 members regarding his concern about the collapsing Japanese economy?  Or the below, ominous chart of Spanish bad loans hitting an all-time high in January?  But don’t worry, all such nations are having their stock markets hyper-inflated; so what could possibly go wrong?

Which brings me to today’s principal topic; i.e., the “death knell of tapering” – as guaranteed by one cataclysmic chart.  Regarding Fed policy in general, I’m not sure why anyone still has any faith in it, given its dismal track record.  Not to mention, why anyone believes a word they say.  If the $16 trillion of secret loans they handed out in 2008-09 didn’t convince you what they actually do is far worse than what they say, hopefully our “proof of the tapering mirage” pushed you closer to understanding the situation’s reality.

Irrespective, the Fed publicly stated its intention to “taper” QE by $10 billion per month in December and another $10 billion per month in January.  Why they would do this – amidst a backdrop of collapsing global economic activity and currencies – is beyond me; although, as we wrote in “they chose poorly,” such a suicidal decision was clearly underscored by “Helicopter Ben’s” hope that his legacy of unabated money printing would be aided by an eleventh hour policy shift.  Unfortunately, making such a statement caused a global currency crash that continues unabated; and frankly, will only worsen as global economic activity further deteriorates.

To that end, the damage was long ago done; and now that the PBOC has made it public record that “accumulating foreign currency reserves is no longer in China’s favor”; whilst Japan’s “demographic hell” and catastrophic debt destroy it from the inside out; it’s all but assured the world’s largest Treasury holders (outside the Fed itself) will be net sellers for the foreseeable future.  And thus, with America’s “debt ceiling” all but abolished, who’s left to buy overvalued, inflation-ravaged Treasury bonds?

The answer, of course, is a resounding no one!  Heck, I nearly fell off the stair climber this morning when I saw CNN talking heads debating whether the U.S. can “impact global chaos.”  LOL, the U.S. is the very entity that created such chaos – by hyper-inflating the dollar, attacking innocent nations, and acting like the de facto “judge and jury” of global affairs.  And irrespective of one’s views on this topic, the data shows foreigners are “voting with their wallets,” in selling U.S. Treasuries at a record pace – which would be even more damning if staged, Fed-funded buying by “Belgium” and other bankrupt nations didn’t show up in the government-published TIC data.

Yesterday, we reported that China alone sold $48 billion of U.S. Treasuries in December – extending a streak of net Treasury selling that commenced roughly six months ago.  This was the second most Treasuries China has ever sold in a single month; and if the aforementioned, dire warning holds true, we could see another $1.3 trillion of such sales in the coming years; not to mention, $1.2 trillion from the Bank of Japan.

And thus, with no further ado, we present the most damning chart imaginable to the Fed’s desperate hopes of restoring credibility by “tapering” QE; let alone ending and, god forbid, reversing it by actually selling Treasuries and mortgage-backed bonds.  That is, indisputable evidence that QE is more necessary to near-term “stability” than at any time in U.S. history; as per below, the 12-month moving average of foreign flows out of U.S. securities just accelerated above that of the post-2008 crisis lows!

As for where that Chinese – and other foreign money – is going, I suggest you read this article, titled, “Global Coin and Bar Demand Surged 28% To a Record 1,654 Tonnes in 2013.”  Of course, those numbers are vastly understated by the fact that only Chinese imports into Hong Kong are reported; and oh yeah, NONE of the thousands of tonnes imported into India via “black market” are not reported at all.

As for today, a “key attack event” given that the January 29th FOMC minutes are to be released at 2:00 PM EST; the Cartel is throwing everything but the kitchen sink at Paper PMs, but miserably failing.  First, we saw the third straight evening of aggressive naked shorting at the tried-and-true 8:00 PM EST “key attack time” at perhaps the world’s most ultra-thin trading hour, in the paper-only Globex market… 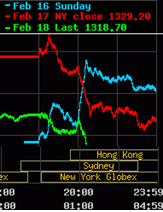 …followed by, as we speak, the most transparent game of DLITG, or “Don’t Let it Turn Green,” in the GLD ETF imaginable… 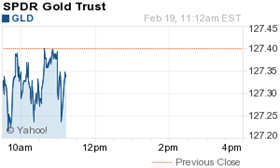 Paper silver, too, is being held just below the unchanged level in advance of the Fed minutes release; but clearly, “something in the air” has changed – as it’s quite obvious momentum and sentiment, is building in the more important PHYSICAL markets.  And now that the PSLV silver trust is trading at a 4% premium to Net Asset Value, the odds of “Admiral Sprott” delivering a powerful death blow to the Cartel are increasing dramatically.

To conclude, there is no propaganda powerful enough to refute the above chart of accelerating global selling of U.S. Treasuries.  Gold and silver prices have surged before the MSM has even considered the possibility of a taper “pause”; let alone, it’s inevitable ending – and likely, reversal – later this year.  This chart graphically depicts the “death knell of tapering”; and to those fighting this powerful trend, the odds are heavily weighed against you.

Once again, we cannot be more vehement in our belief that the window to acquire PHYSICAL gold and silver – and thus, protect yourself from the inevitable, perhaps imminent, hyperinflation that has followed every fiat currency regime in history – could close at any time, for a variety of reasons from the patently obvious; to “known unknowns”; to as yet unforeseen “black swans.”  And when it does, it will be forever too late to do so.