Just as TPTB maintain CONTROL over financial markets with a pit bull’s veracity, I will continue to EXPOSE what they are doing.  Thanks to the “virality” of the internet, it is IMPOSSIBLE for them to prevent the flow of information, and with each passing week more and more damning evidence infiltrates the worldwide web.

Long ago, I learned the power of repeating key themes, which is why I make sure to document each day’s movement of PAPER gold and the “DOW JONES PROPAGANDA AVERAGE,” two of the most manipulated markets on Earth.

In the case of gold, manipulation (i.e. suppression) is required to maintain an illusion of CONFIDENCE in fiat currency, which TPTB know well could (and inevitably will) vanish in an instant.  As for the Dow, it is the world’s most widely viewed stock index, erroneously considered a linchpin of the global economy.  In many ways, its support is viewed by TPTB in the same manner as gold, as CONFIDENCE in worldwide economic recovery is essentially impossible when the Dow is falling, let alone plunging as it certainly would in a free market.  Heck, even Greenspan and Bernanke overtly cite the stock market as a key indicator, and since they (the government) are OVERTLY targeting interest rates, why wouldn’t they COVERTLY target the stock market – particularly when they have an official group mandated to do so, the “President’s Working Group on Financial Markets?”

In my five “COMEX GOLD MANIPULATION PICTORIALS” – listed as “RANTING ANDY SPECIALS” in the “Newsletters” section of the Miles Franklin Website – I detailed each day of COMEX gold trading activity for the past two years, enabling readers to note the incredibly similarities between manipulated daily trading patterns.  Such work was supplemented by last week’s brilliant report by Paul Mylchreest of the Thunder Road Report, titled “Caught Red Handed: Manipulation of the Gold Market.”  Here, I have published the daily chart of the past two months of DOW JONES PROPAGANDA AVERAGE trading, breaking them into three categories:
1. Dead Ringers – daily charts depicting the typical PPT pattern of a bottom in the first 45 minutes of trading, followed by a low volume, low volatility rise for the remainder of the day.  In recent months, the “HAIL MARY ALGORITHM” – when the Dow surges into the NYSE close – appears to have been phased out (no longer necessary) as the “DEAD RINGER ALGORITHM” appears to be just as effective, with far less drama
2. Variations Thereof – daily charts wherein SONME elements of the Dead Ringer scenario are present – such as an early morning bottoming, low volume increase for much of the day, or even the “UNCHANGED ALGORITHM” – but not ALL.  The “UNCHANGED ALGORITHM” denotes maniacal PPT support at the unchanged level for the day – the polar opposite of the gold Cartel’s “DLITG ALGORITHM,” which maniacally prevents GLD from turning positive on selected days.
3. Anomalies – daily charts wherein all Cartel attempts to control the Dow’s price fail
Per the table below, of the 39 trading days in February and March, an incredible 25 – or 64%, represent “Dead Ringer Days.”  In other words, on nearly two-thirds of ALL trading days, the same upwardly biased trading pattern exists, regardless of news or the action of other markets.  Additionally, 12 of the 39 days – or 31%, represent “Variations Thereof,” leaving just TWO DAYS, or 5%, to the realm of “Anomalies!”

I could end this RANT right here, having made my point loud and clear – that PAPER markets have ZERO correlation to REALITY – but I figured I’d show you the charts to drive the point home harder! 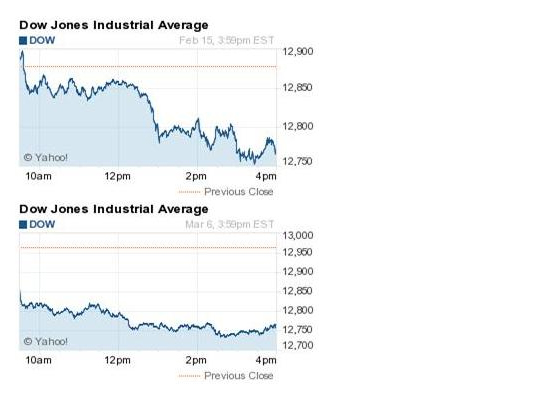