We have lots to discuss before today’s primary topic – on the ramifications of the mathematically certain collapse of history’s largest Ponzi scheme.  Unequivocally, I’m compelled to start with this article from the great Steve St. Angelo, of a topic I have been meaning of writing of for months.  It compares copper and silver’s “corrections” from their highs and the paradox of the world’s most industrially sensitive metal, “Dr. Copper,” declining just 22%, whilst history’s oldest monetary metal, silver plunges 51%.

Actually, if he went back to both markets’ highs in the spring of 2011, copper – or as I recently deemed it, “Dr. Death” has fallen from $4.50/lb. to $3.05/lb. or 32%, whilst silver has fallen from $50.00/oz. to $17.80/oz. or 64%.  At -35%, even gold has fallen by more than copper over this period, despite record physical demand, unprecedented money printing and dramatic expansion of the factors that drove it to $1,920/oz. three years ago.  And oh yeah, the global economy has free-fallen since – as depicted by this morning’s nine-month low in the Eurozone composite PMI index; yielding dramatic demand reductions in industrial commodities like copper, as noted in September 4th’s “West to East, Global Economic Collapse” and September 10th’s “Commodity Crash.”

The concept of copper – or any base metal – outperforming precious metals over this period is simply comical, for lack of a better adjective.  Moreover, anyone watching metals trade quickly realizes the obviousness of gold and silver suppression compared to the nearly free-market action of the base metals.  To wit, every gold and silver rally of the past decade has been halted by a “Cartel Herald” algorithm – typically, at the same times of day; whilst base metals never experience such caps, have no discernible daily trading patterns, and rarely react materially to “news” like NFP reports and FOMC policy statements.

And for those that say copper, zinc and lead should outperform precious metals because of plunging inventories – down 72%, 40% and 42%, respectively from their 2012-13 highs – I simply say this; Shanghai silver inventories have fallen 91% since then to a measly $50 million worth!  And not only that but as we wrote yesterday, more than half of all silver production is by-product of base metal mines – principally, copper, zinc and lead.  And thus, the ominous plunge in base metal inventories will only serve to tighten silver supply further. 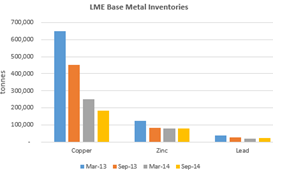 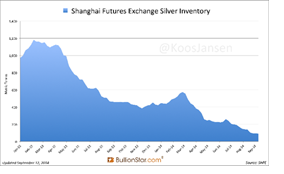 Next up in this morning’s “horrible headlines” brigade, the “recovery” we’re supposed to believe in, despite real economic data suggesting the world is not only not recovering but free-falling at a rate reminiscent of late 2008.  And no, that’s not a typo, as indisputably most nations would gladly trade their late 2008 economies for the economic tragedy 2014 has wrought.  And yes, that includes the U.S., where retail gasoline sales – in gallons, not revenues – have plunged by an astonishing 58% from the baseline level of the prior 30 years!

Worse yet, the Fed-generated “housing boom” – that the U.S. government admits to be the largest source of incremental GDP growth – had decidedly ended.  Indisputably, only “1% homes” above $1 million in value are still in positive year-over-year price territory, and barely so.  However, even such high-end markets – like San Francisco – are now declining; and as for the rest, we’ll let this ugly chart tell the story.

Last but not least, the incredulity sensible people feel when witnessing yesterday’s commencement of bombings in Syria, as the U.S. formally starts its second Middle East war in the past two months – only this time, our “coalition of willing” participants doesn’t include Germany, the UK or even France.  No, this time around, we’re supported by the military powers of…drum roll please…Qatar, the UAE, Saudi Arabia, Jordan and Bahrain – and care of this morning’s incident, the Middle East’s most hated nation, Israel.  And thus, the financially draining, reputation-destroying “war on terror” takes a giant leap forward involving the U.S. and for the most part a mish-mash of Arab nations with no military strength and vastly divergent agendas.  No, nothing could possibly go wrong here.

And now, for today’s main event – inspired by Jim Quinn’s article, titled “This is why Russia and China are now the enemy.”  Which, as we have written for some time, is the simple fact that the emerging “Sino-Russian axis” is rapidly acquiring the world’s gold to the point that we wouldn’t be surprised if they own more than the entire Western world combined – and then some.  When Mitt Romney infamously called Russia our “greatest geopolitical foe,” he didn’t know the half of it; as he was focusing on primitive Cold War-style animosities when the real war is the economic one the eternally vilified “communist bloc” is waging – and winning.

Care of the passivity – and foolishness – engendered by three years of incessant PPT equity support, Fed bond support, and Cartel PM suppression what remains of the world’s “investment community” whistles past the graveyard as earth-shattering headlines like yesterday’s “Russian Finance Minister calls for shift away from U.S. Treasuries into BRIC bonds, settlement in non-dollar currencies” and last week’s “PBOC Chief Zhou says gold important part of financial markets.”  The Miles Franklin Blog and Newsletter has been pounding the table on these generational changes for some time – as in January’s “Beware the Dragon” – but the rest of the Western world ignores the single most important trend change of our lifetimes.

The inexorable movement of precious metals from West to East cannot and will not stop until the end game arrives of a global monetary power transfer unparalleled in centuries.  China and Russia will be the world’s new economic powers; and when all is said and done, the world’s marching orders will be generated in Beijing and Moscow not New York, London and Tokyo.  Like Noah’s Ark, nations of all kinds are rapidly joining the Sino-Russian axis – via trade agreements, currency swaps and diplomatic ties – whilst the dying U.S.-UK axis sees its signature organizations of NATO, the World Bank, and the IMF, among others wholly discredited and virtually eliminated.  The “new world order” will ultimately be based on sound money; but getting from today’s point A to tomorrow’s point B will likely be a long rocky one.

Last week’s launch of the Shanghai Gold Exchange’s “International Board” cannot be underestimated, as without a doubt its impact will be felt for decades.  For the first time, international firms will be able to participate in this largely physical market with parallel contracts to shortly be launched in other major Chinese cities utilizing dozens of massive storage vaults.  In this case, actual “commercials” will be major players, such as the world’s largest gold refineries; and given the PBOC’s decidedly pro-gold stance, the odds that criminal U.S. banks will be able to materially influence trading appear slim to none.  As noted above, the PBOC believes gold to be an important reserve asset – as opposed to the clueless U.S., whose last Fed chairman said the only reason Central banks still own it (if they actually still own it) is due to “tradition.”

In our view, the new “Shanghai Gold Benchmark” will in time be the basis of global gold – and by extension, silver – prices yielding a “new world order” in which, when Westerners awaken each morning, the day’s price movements will have already occurred.  And given that PMs, on average have traded upward more than 90% of the time in (formerly thinly-traded) Asian hours, you can bet said price movements will not include the waterfall declines we have endured for decades.  Conversely, upward spikes will become the rule, as the Western fiat cancer fully metastasizes, yielding dramatic upward revaluations of real money.

And thus, for those refusing to “beware the dragon,” do so at your own financial risk.  For unsuspecting Westerners, the “enemy” is rapidly approaching with an agenda of replacing the dollar and Euro with Eastern equivalents; only in this case, they will ultimately be backed by gold.  Time is running out before they “invade” Western financial markets; as when they do, the odds of purchasing material amounts of metal – let alone, at prices even remotely close to today’s Cartel generated fire-sale prices – will be slim to none.