It’s another ugly morning with the list of “horrible headlines” not only broadening, but intensifying.  Just a day ago, TPTB attempted to assuage “Ukrainian fears” with a new round of “de-escalation” propaganda and market intervention.  However, just as Obama openly admits America’s re-entry into Iraq will be a “long-term project,” the Ukrainian crisis isn’t going away anytime soon – and perhaps, will plague the world for generations.  In fact, it’s probably at its worst point since fighting broke out in March, just as the global economy is unquestionably at its lowest point since 2008.

Zero Hedge is typically the world’s best alternative media website, but in ascertaining “bonds don’t believe it’s over” due to “geopolitical fears” is; in our view missing the key point.  Which, as we wrote in May’s “Most Damning Proof Yet of QE Failure,” is the fact that collapsing economic activity is causing investors to bet – rightfully so – on global “QE to Infinity.”  Moreover, per last week’s “is It Really Ukraine?” the historic financial asset bubbles created by the Fed and other Central banks must be supported at all costs; in this case, with hyperinflationary monetary policy.  Eventually – when hyperinflation inevitably arrives – yields will rocket into the stratosphere.  However, until then global investors will continue to assume the Bank of Japan’s path to zero interest rate sovereign bonds will be taken by the Fed, ECB and other major Central banks.

Speaking of propaganda, how can anyone still listen to the ramblings of Reserve Bank of India governors?  We have long characterized the Indian government as perhaps the worst run in the developing world; and thus, to see investors “relieved” that inflation is just 7.4% is nothing short of incredible – particularly as the all-important food inflation rate is considerably higher.  Or how about America’s long-time partner in crime, the UK, of which we’ve been incessantly told how “strong” its economy is?  Don’t make us laugh, as like the U.S., the only reason it is even perceived as stronger is because like the Fed, the Bank of England has an unfettered printing press that has enabled it to funnel free money into the hands of the “1%,” who in turn have inflated an historic real estate bubble in “1% markets” like London.  UK housing is already rolling over amidst the highest cost of living environment in Europe; and reading today’s estimates that UK GDP will rise by just 0.7% for the next two quarters, we’re baffled as to what all the hype was about in the first place.

As for the rest of Europe, whose money printing escapades are limited by the fact the ECB must obtain consensus from 24 member nations; it is on the verge of collapse.  Ultimately, the ECB follows the same path as other Central banks; and mark our words, the $1 trillion QE scheme the ECB is “preparing” will be launched later this year – to fail as miserably as Japan’s Abenomics and America’s QE 1-3.  In the meantime, the European economy can best be described as in freefall with today’s articles ranging from the collapse of France, to the need for a broad Italian bailout, to the ominous fact that Greece’s largest trade partner is Russia – thus, making it extremely vulnerable if Europe continues to press for economic sanctions.  And for the record, per the below chart, France is Russia’s largest trade partner overall.  Not to mention, French banks are more exposed to Greece than any other nation. 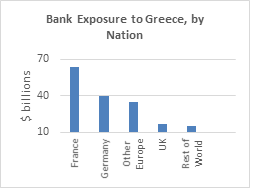 And don’t forget today’s abysmal news from Europe’s undisputed leader, which no doubt will lead the charge to break up the Euro when the continent’s economy inevitably implodes.  Yes, Germany’s all-important ZEW investor sentiment index plunged to 8.6 in August, down from 27.1 in July and representing a seventh straight monthly decline.  In other words, don’t be surprised to see the aforementioned QE announcement at the ECB’s next meeting on September 1st. 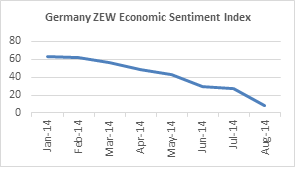 Which brings me to the main event, catalyzed by this morning’s excellent article by Bill Holter.  The topic is the New York COMEX trading pits, which have long dominated gold and silver’s “price discovery” process.  We have written exhaustively of COMEX fraud for years, but never has it been more critical than today – as “any day now,” it will be forever discredited; and with it, the global dollar-anchored fiat Ponzi scheme.  The key phrase is “dollar-anchored,” as no one has “taken it out” yet due to fears of the collapsing the value of their own heavily dollar-weighted reserves.  But rest assured, like a musical chairs game in its final seconds, the urge to protect oneself will become so great, someone will inevitably “break ranks” and set the snowball rolling downhill.

Frankly, how anyone can not realize the COMEX is a pure fraud is beyond us.  In “freely-traded markets,” sixth-sigma events do not occur on a daily basis.  Moreover, when the vast majority of product is purchased in the East, it is not rational for prices to be “set” in the West – much less by a fraudulent process ironically called a “fix.”  And finally, how on Earth can an exchange purporting to hold $1.3 billion of deliverable gold inventory and $1.2 billion of deliverable silver inventory be viewed as the precious metals “authority?”

To wit, there are an acknowledged 1,600 billionaires capable of taking out at least one of these two stashes; plus perhaps 16,000 institutions and dozens of Central banks – led by the PBOC, which holds $4 trillion of depreciating currency reserves.  Heck, China imported gold worth $51 billion in 2013, and we’re to believe they didn’t consider the measly $1.3 billion on the COMEX?

Each day, new revelations of COMEX chicanery are revealed – atop 15 years of blatantly suppressive price activity.  I mean, how can any traders still buy gold and silver call options when every month the Cartel raids prices days before expiration?  And how can anyone believe the unaudited inventory data supplied by collusive “too big to fail” firms with essentially no CFTC oversight?  The CME itself started publishing a disclaimer last June that it cannot guarantee its own data is correct; and now that JP Morgan has been fined for repeatedly falsifying such information, it becomes even more obvious that the aforementioned miniscule amount of metal is the base of an enormous soon-to-be-collapsed Ponzi scheme.

For years, we have referred to precious metals as the “Achilles Heel” of the global financial system; as once these time-honored inflation barometers break from the Cartel’s grasp global financial fear will spread like the Ebola virus.  This has occurred time and again throughout history, and today’s global epidemic will be the most terrifying episode yet.

However, silver is by far the “Achilles Heel’s Achilles Heel,” as no more than two billion ounces exist in investable form worldwide; of which the vast majority – like mine – will never see the light of day.  Last week, we highlighted how the world’s largest PHYSICAL exchange in Shanghai, has seen 90% of its physical silver inventory depleted since last April’s vicious COMEX paper attacks, whilst COMEX inventories have barely changed amidst a fresh $6 billion of naked shorting, principally by the same “commercial” traders that have been suppressing prices for the past 15 years. 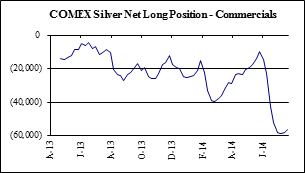 As the global economy collapses into oblivion, and Central banks step up their maniacal money printing exponentially, the pressure on the “world’s Achilles Heel” – i.e., the COMEX trading pit – will increase commensurately.  It’s only a matter of time – likely, much sooner than later – when it is destroyed by metal-hungry investors, institutions and Central banks.  And when it is the “world as we have known it” will be forever changed.  Each day, the window to PROTECT oneself with physical gold and silver closes a bit more; and once its shut it will likely be forever!