It’s now “Brexit plus seven” – and with the long holiday weekend approaching (albeit, not in the UK, which decidedly does NOT celebrate “Independence Day”), the powers that be are running out of time to “control” the carnage they created.  As trust me, given the collateral damage emerging from all imaginable political, economic, and monetary corners, NO ONE will want to “go long” Friday afternoon.

I mean, in the last 24 hours alone, France’s Marine Le Pen called for a broad “European Spring” movement; Puerto Rico announced it will default on its debt this weekend; U.S. East Coast shipping traffic was reported to have plunged; the U.S. government published a report highlighting the Social Security Fund’s insolvency; and utter chaos ensued in UK politics, regarding how and when the Brexit will be implemented, and who will be the next Prime Minister.  And that doesn’t even include the MASSIVE, EARTH-SHATTERING news this article is about, which I’ll get to shortly.  In the meantime, I’ll give you a “hint” – that what I wrote in June 13th’s the “Lehman of Europe” is on the verge of collapse, escalated dramatically last night.

Yes, the U.S.-led “plunge protection team” did an admirable job goosing large-cap stocks the past two days – whilst the Cartel did everything in their naked shorting power to hold gold and silver down.  However, global sovereign yields – including U.S. Treasuries themselves – “weren’t buying it; as not only is the 10-year T-bond yield, at 1.47% as I write, not far from its post-Brexit (and all-time) low; but an incredible $11.7 trillion of global sovereign bonds now trade with negative yields, up from “just” $10.4 trillion a month ago.

And oh yeah, the “ultimate canary in a coal mine,” silver, decidedly did NOT co-operate with the Cartel’s manipulative plans – in first breaching the Cartel’s two-year “line in the sand” of $18/oz; and subsequently, the initial post-Brexit spike top of $18.40/oz.  My friends, I wasn’t kidding when I wrote the “upcoming, historic silver shortage” on June 8th; as everything I have seen and learned in my 14 years in this sector – including five as the Marketing Director of Miles Franklin, one of the nation’s largest bullion dealers – tells me it’s nigh.  That, and the rapidly approaching collapse of the global monetary system; as sadly, George Soros’ comment yesterday that Brexit has “unleashed a crisis similar to 2008” vastly understates its horrific political, economic, social, and monetary ramifications.

When history is written, last night’s pathetic, desperation move to restore confidence – by having 21 “too big to fail” banks announce increased stock repurchase and dividend programs – may well be viewed as the “straw that broke the Camel’s back,” regarding the last remaining shreds of Wall Street, Washington, and MSM credibility.  Well, that and last month’s pathetically inept “FOMC Minutes Attack” of the Precious Metals – which failed mere weeks after being launched, as I predicted.  And of course, last week’s “dumbest, most desperate manipulation excuse ever” – i.e, the propaganda that Jo Cox’s death somehow swayed public opinion from “leave” to “remain.”

I mean, that “manipulative ship” sailed back in February, when Deutsche Bank’s last stock collapse – to a low of $14.80/share – was laughably arrested by the announcement that it had bought back $5.4 billion of its $165 billion of on balance sheet bonds; which of course, ignores the massive, incalculable liabilities inherent in its $70+ trillion derivatives book, the world’s largest.  Which, I might add, is the primary reason the stock was down in the first place!  Moreover, as I wrote at the time, “even if the buyback was indeed funded internally (which I strongly doubt), the last thing a company with liquidity issues should do is to spend its capital buying back stock and bonds.”

That said, last night’s “confidence gesture” was more pathetic still; given that Deutsche Bank, which was perhaps the only stock on the planet to have fallen yesterday, was conspicuously not included.  And better yet, LOL, said “gesture” was announced before the aforementioned devastating news about Deutsche Bank.  I.e., that it – and Santander, Spain’s largest bank – failed the Fed’s most recent “stress test” simulation, despite having spent hundreds of millions preparing for it.  Which, in turn, caused the IMF to publish a press release, in which it stated that Deutsche Bank is the “most important net contributor to (global) systemic risks.”  Which may well be the biggest understatement ever, given that the entire global financial system is intricately tethered together – to not just DB’s gargantuan, black hole of a derivatives book, but everyone’s derivatives books.

As I write, the Cartel, too, is laboring in its blatant attempt to hold gold below $1,320/oz, whilst silver is causing them major problems, given that the COMEX has next to no actual silver inventory on hand.  Which is quite the coincidence, given that yesterday’s article was titled “spread the word – the Cartel is in deep, deep trouble,” following up on June 20th’s “finally, the long-awaited ‘Commercial Signal Failure is nigh.”  As for Deutsche Bank, it is down 4% as I write; at $13.60/share, a mere $0.20 above its post-Brexit spike bottom low.  Or, putting it in better prospective, on a “crash course” with Lehman’s spiral to equity oblivion eight years ago. 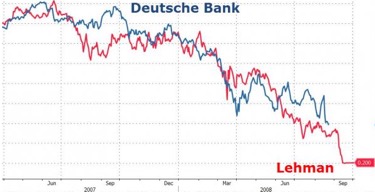 My friends, I’m not sure how much more vehement I can be that the time to PROTECT YOURSELF – which in most countries, has already passed – is running extremely, extremely short in those nations, like the U.S., where one still can.  As whilst Deutsche Bank – and likely, dozens of other insolvent banks, both Commercial and Central – are about to replicate Lehman’s experience, said “powers that be” will be powerless to stop, or even slow the carnage, of the collapse of history’s largest, most destructive fiat currency Ponzi scheme.