The Most Damning Proof Yet Of QE Failure

Despite the myriad fallacies of such narrow-minded beliefs, the reason “tapering” is touted as “PM negative” is the assumption it will coincide with a rapidly improving economy and with it, higher interest rates.  Better yet, propagandists like Janet Yellen, Mario Draghi, Mark Carney, and Shinzo Abe create fraudulent expectations of “deflation”; i.e., the first hint of disingenuousness as there is simply no way a recovering economy featuring higher interest rates could coexist with deflation.  Irrespective, the U.S. economy is decidedly NOT “recovering” and despite said “tapering,” interest rates are not going higher, but lower.  Per the MUST SEE video I initially posted yesterday – is raging at unprecedented rates in a burgeoning “taxation nation” on the verge of all-out highly inflationary socialism.

History proves money printing does not cure anything; and in fact, it has a highly detrimental impact on economic activity – as the world has painfully learned over the past six years.  In fact, all QE – and ZIRP for that matter – ultimately accomplishes is upward pressure on interest rates; as by definition, printing money creates debt which at some point not only become unpayable but unserviceable.  To wit, since the Fed went berserk with its various ZIRP and QE policies in 2008, the national debt has increased by an astonishing $7.5 trillion, plus $5+ trillion “off balance sheet” debt related to the nationalization of Fannie Mae and Freddie Mac and tens of trillions of “unfunded liabilities.” 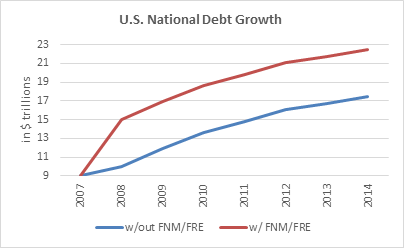 Essentially, this is what occurred in the past year at the “all knowing” Fed.  Last spring, understanding its QE policy was exploding its balance sheet amidst an at best lukewarm economic environment, soon-to-be-departing Chairman Bernanke realized that not only was his legacy on the line (of being a non-stop money printer), but the very legitimacy of QE.  Not to mention, the fact that the only true “benefactors,” thus far, have been the Wall Street banks that own the Fed. 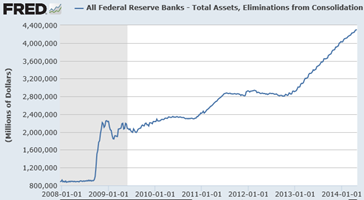 To wit, the so-called “Bernanke Put” – and a turbo-charged “President’s Working Group on Financial Markets” (i.e., the PPT) – had pushed stock and Treasury prices to record levels, despite a real economy mired in its weakest condition in generations.  Heck, even Citibank noted yesterday that “markets stopped following fundamentals about two years ago.” And thus, TPTB determined last Spring that it was a good time to commence an unprecedented scheme of money printing, market manipulation and propaganda to extricate itself from QE.  Not to exit its massive portfolio, mind you – this frankly, has become too big to ever be sold.  And certainly not to end ZIRP, or Zero Interest Rate Policy which the Fed now intends to maintain until at least late 2015 (i.e., forever).  But instead, to simply stop the buying – at least overtly.  Thus, it commenced a relentless hype campaign regarding “Deflation” and “Recovery”; a de facto “New York Gold Pool” to slam gold and silver prices – as described in last week’s “True State of Precious Metals” and, of course, non-stop discussion of the newest propaganda buzzword, “tapering.”

The thing is, said “tapering” was a complete lie – as we proved several months back.  Clearly, the Fed was printing far more than purported throughout 2013; and when “Belgium” suddenly showed up as a massive Treasury buyer in early 2013, it was clear the Fed had recruited additional covert “help” from its European partners.  Whether the ECB was funding said purchases outright or simply using Fed-printed money will never be known.  But irrespective, the Fed was clearly acting outside its stated QE mandate in its desperation to offset massive foreign selling – particularly from the world’s largest Treasury holder, the Chinese, following the PBOC’s “shot heard round the world” statement in November, that “it’s no longer in China’s favor to accumulate foreign-exchange reserves.”  And for anyone still remaining that “trusts” the Fed, I hope you haven’t forgotten the $16 trillion of “secret loans” handed out from 2008-10 which, even today, we still have no idea how much has been paid back.

However, a “funny thing happened on the way from the Eccles building” in that despite a year’s worth of $85 billion/month QE, the U.S. experienced an historically weak 2013 holiday retail season followed by a first quarter 2014 economic collapse that will likely produce a negative GDP figure when all is said and done, government “fudge factors” notwithstanding.  Consequently, said “recovery” hype required a new propaganda scapegoat; in this case, the “weather” – which according to our article “Mother Nature has had Enough,” simply didn’t hold water.  That said, the “evil Troika” of Washington, Wall Street, and the MSM continued to hype “recovery” with a ferocity equaled only by the Cartel’s PM suppression which has never approached the level of blatancy and counter-intuitiveness witnessed in recent months.

However, to “Helicopter Ben” and “Whirlybird Janet’s” chagrin interest rates have gained considerable downside momentum particularly since year-end; ironically, just as “tapering” was purported to have commenced.  Not to mention, across the entirety of Europe, this is why Draghi, too, continues to spew lies regarding “deflation.”  And thus, just as the Fed lied about “tapering” when the benchmark 10-year Treasury yield approached their upside “line in the sand” at 3.0% – as highlighted in our January article, “3.0% – Nuff’ Said” they are clearly facing a new, equally dangerous circumstance.  That is, the market appears to be “calling out” the Fed’s “recovery” propaganda by taking rates lower in other words anticipating increased QE.

Thus, the Fed has now been forced to draw a “downside line in the sand” as well; and perhaps arbitrarily, choose the 2.60% level highlighted in yesterday’s “2.60% – ‘Nuff Said.”  In it, we suggested this phenomenon is for all intents and purposes identical to what is occurring in Japan – where the “Nikkei Propaganda Average’s” early 2013 gains (with ZERO growth since) are propagandized as “proof” of Abenomics’ success.  Mind you, the Japanese government bond market has already been 100% commandeered by the Bank of Japan – as evidenced by the 36-hour period last month where not a single trade occurred in the world’s second largest bond market.  And thus, the sole “burden of proof” falls on the Nikkei which as you can see, is as close to “disproving” Abenomics’ efficacy as the 10-Year Treasury yield to disproving QE.  Never mind, of course, that Japan’s economic numbers could not be uglier; as in today’s world of market manipulation and propaganda, financial markets have come to be considered the only “signals” of economic progress – or lack thereof. 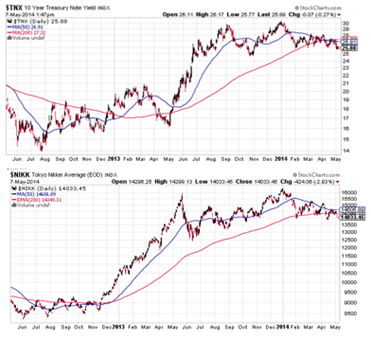 And thus, with Treasury yields falling despite the aforementioned massive foreign government selling – the Fed, for once, is being forced to taper.  Not end QE, mind you, but simply taper it.  And end the ZIRP policy that maintains the solvency of dozens of TBTF banks which we assure you, can never end.  However, if the “unknown buying sources” gain enough momentum – i.e., pushing the 10-year yield significantly below the “sextuple bottom” at 2.60% – perhaps the Fed will actually sell some Treasuries to prevent rates from falling too far; as given the aforementioned economic deterioration and inflationary surge, the only conclusion the world could possibly make regarding falling rates amidst QE “tapering” is that the Fed has failed; and thus, will feel compelled to increase QE to prevent instantaneous economic collapse.  Worse yet, despite the fallacy of such a conclusion, the world might actually believe “deflation” is occurring – never mind that food, rent, energy, insurance, education, and taxation costs are surging; i.e., the Fed’s most staunchly feared outcome.

As for yesterday’s crime scene, what more can be said that hasn’t been already?  Twas a typical story, with Yellen giving meaningless Congressional testimony at exactly the Cartel’s “key attack time #1” of 10:00 AM EST.  The PM raids were planned well in advance; and thus, the second her prepared statements came out stating nothing different from last week’s FOMC statement, PMs were viciously attacked.  No matter what the MSM’s principal takeaway was her quote that “a high degree of monetary accommodation remains warranted”; as the Cartel’s plan, just as on the 2012 “Leap Day Violation,” was to attack with impunity to accomplish its goal of breaking the floor at $1,300/oz.  Equities didn’t co-operate with their plan – as they immediately plunged as well and thus, as you can see below, a prototypical “dead ringer” algorithm was used to protect the “Dow Jones Propaganda Average”; while, of course, no such favors were afforded to the paper PM markets, particularly at the primary “key attack times” of 2:15 AM EST, 8:20 AM, 10:00 AM, and 12:00 PM. 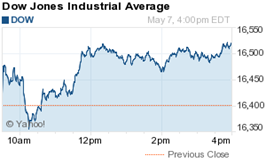 Unfortunately, the most important aspect of their plan – i.e., convincing markets that Yellen was “hawkish” by slamming bonds – Treasury yields turned tail after their initial, Fed-abated surge to close below the 2.60% “line in the sand.”  And thus, just as the Cartel does essentially every day in the PM market, the Fed went right to work in the ultra-thin Globex overnight market to spike rates higher.  It’s now 10:45 AM EST and as you can see, rates have just plunged below yesterday’s lows (presumably due to what Yellen said in her Senate testimony) in what appears to be a powerful downward trend, gaining significant momentum. 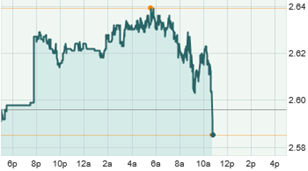 Once again, we cannot emphasize enough that this trend is global; as essentially all nations are either amidst ultra-easy monetary policy or in the process of initiating it.  This morning, for example, both the ECB and BOE left rates near the zero level they’ve been at for the past six years – with absolutely no discussion of the timing of a potential exit.  Draghi said the ECB is “ready to act swiftly with further easing if needed, and “ready to consider unconventional instruments”; whilst Mark Carney said that although the UK unemployment rate has fallen below the 7.0% level it previously pegged as the threshold required to end ZIRP policy, the BOE no longer intends to remove the punchbowl any time soon.  Sound familiar?

Frankly, I believe the ECB and BOE are confronted by the exact same situation as the Fed particularly the ECB, based on the below horrific banking statistics.  In other words, they both know further easing is coming; but are simply waiting to see when (not if) the next crisis commences, so as to preserve whatever remaining “printing press ammo” they think they might still have.  The same goes with the Bank of Japan, the People’s Bank of China, and the Central banks of essentially all dollar-anchored economies.  This is to say, all economies.  Remember, fiat currency regimes are – by definition – Ponzi schemes and thus, must grow larger, at increasing rates, to survive.

Betting against history is never easy but doing so by siding with a proven loser is pure suicide.  Fortunately, by holding physical gold and silver – as opposed to paper proxies like mining shares, ETFs, closed-end funds, futures, and options – you are decidedly not “betting” on anything but instead, simply preserving your wealth by saving it in the form of real money.