The Most Dangerous, Destabilizing Force On Earth

In May 2006, while still living in New York, my wife and I walked into an adoption agency to inquire about international adoption.  We had done extensive research on the topic already – and given the heart-wrenching stories of abandoned Chinese girls, care of a misguided population control experiment destined to cause significant financial and social chaos in the coming decades, we had our heart set on China.  South Korea, Vietnam, and even Russia were also viable alternatives, but we chose China – not only due to the story behind its “lost girls,” but the adoption agency deemed China’s adoption program the most “stable.”  In 18-24 months, they claimed, we’d be in Guangzhou province picking up our daughter, at a cost of “x.”

Not that anything about international, or domestic, adoption is “stable”; as in the ensuing years, first Vietnam, and then Russia, abruptly ended their international adoption programs.  However, we truly believed that China, in its quest to become a global political, economic, and social leader, would bend over backwards to be as efficient, and co-operative, an adoption partner as possible.

True, a lot occurred in the ensuing years; starting with the Beijing Olympics in 2008, which caused an all-out beaurocratic shutdown for at least a year.  And of course, said “one-child policy” has been since modified to reduce the exodus of girls from a critically demographically challenged nation.  However, Diana and I were astounded at how “third world” the process appeared to morph into by the end – when, miraculously, our little Sylvie was finally given to us in August 2013, more than seven years later.  Not to mention, at a cost vastly more than the initially stated “x.”

Don’t get us wrong, we are thrilled that the Chinese government is taking steps to retain its native daughters – which in the big picture, is likely the best thing for it.  However, the second she was across U.S. borders, I did everything possibly to legally Americanize here – given the complete lack of trust I had developed with a nation that, despite tremendous economic and social advancements in recent decades, is still Communist to the core, run at the whims of a handful of largely inept, self-interested politicians.  No different than the mental capacities of Western politicians, mind you, but at least the West has some manner of checks and balances (for now) to protect citizens from dictatorial government.

Regarding China’s economic policies, no one has more vocally lambasted the cluelessness and destructiveness of the paths they have chosen.  Yes, I understand that within a Communist regime – with 1.5 billion mouths to feed – such policies may at times be a bit unorthodox.  However, the overpopulation problem has been compounded – or, to use a Western term, “leveraged” many times over by suicidal policies of pegging the Yuan to the dollar; promoting the development of a vast, unregulated “shadow banking” financial system”; and, of course, taking the “bridge to nowhere” growth strategy to an unprecedented extreme – in sourcing trillions of tons of raw materials to build “ghost cities”; trains to nowhere; and other hopelessly unprofitable construction projects – which in the big picture, will turn out to be the jailhouse equivalent of “digging holes and filling them back in.”

These lunatic policies form the core of the “Great Deformation” David Stockman wrote of in his 2013 book of the same name – which has formed the entire basis of my economic outlook for at least the next decade; and likely, far longer.  To wit, my January 2nd, 2015 article, “the direst prediction of all,” cites Stockman’s thesis that the monstrously destructive ZIRP, QE, and other Central banking financial repressions since history’s largest fiat currency Ponzi scheme peaked at the turn of the century, and broke in 2008, have facilitated a global oversupply of essentially everything imaginable – and done so, at a time of exploding, unprecedented debt levels.

In other words, sowing the seeds for a “deflation for the ages” – except of course, in Precious Metals, whose “supply response” will be the polar opposite of all other “commodities,” in that not only are gold and silver decidedly not ordinary commodities, but two decades of Cartel price suppression – in the name of fostering the aforementioned fiat Ponzi monstrosity – have guaranteed not only peak gold and silver production NOW, but the massive product shortages we are already starting to see.

To that end, the conclusions espoused by Miles Franklin’s President and Co-Founder, Andy Schectman, in our MUST HEAR podcast from last Thursday – i.e., that we are on the verge of major, debilitating silver shortage – has for the most part been widely agreed upon by our industry peers.  That said, there’s always going to naysayers – largely due to ignorance, and in some cases “agendas” – with my favorite being that some claim to have no problem sourcing small lots of silver – say, 100 ounces or less – from online sellers or local coin shops.

My friends, there is always going to be turnover of “odd lot” amounts, especially during times of turmoil.  However, if you want to buy any kind of size to protect your assets, you are going to find it nearly impossible to do so without a significant delivery delay – and price premium, over the increasingly irrelevant, entirely fraudulent paper market.  And keep in mind, the real crisis hasn’t even begun – as trust me, when the final hopes and beliefs that August’s market crash can be “reversed” by Central banks are shattered, the mad rush to save one’s assets at all costs will begin.  But unlike 2008, when Central banks were able to “save the day” – or better put, “kick the can” – no such salvation will be available today.  Which is why, if you think the current explosion in silver premiums is a big deal, you ain’t seen nothing yet.  “September Cometh,” and has all the appearances of being as scary – or scarier – than September 2008. 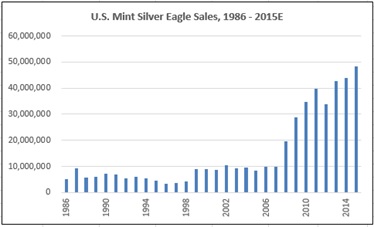 Back to the “most dangerous, destabilizing force on Earth” – as I write Tuesday morning, with Dow Futures down more than 400 points, just before the NYSE open – perhaps you have guessed I’m speaking of China.  Which, simply due to the massive size of its population; manufacturing market share; financial resources (and far larger debts); and likely, military capabilities, has a global political and economic impact far larger than any other entity.  Frankly, more powerful and destructive than the entire Western World combined; with one notable exception – i.e., the printer of the current “world’s reserve currency,” the U.S. Federal Reserve.

Sadly, even the sociopathic Wall Street, “City,” and Crony Capitalist narcissists running the Western financial system aren’t as clueless as the sheltered heirs and heiresses running China.  This small, select group of “elites” have been charged with guiding a nation of 1.5 billion to prosperity – but instead, have taken them mere steps from regressing back to the economic Stone Age.  And when they inevitably fall into that abyss – perhaps, far sooner than most can imagine – they will drag the entire world with them.  To wit, the economic carnage as China’s monstrous economic and financial bubble – frankly, without peer throughout history – implodes will be unprecedented, and not a thing can be done to stop it.  Last night’s horrifying Chinese PMI reports – which the talking heads are blaming for this morning’s extreme equity and commodity weakness (whilst ignoring gold and silver’s strength, of course), is just one of many omens of the economic and financial horrors to come, as global trade is already far weaker than at the 2008 lows, and we haven’t even gotten started with the “big stuff.”

However, what scares me the most is not China’s imploding economy, but the potential for it to squander the world’s only significant financial resource in the blink of an eye.  Yes, I know they have an “ace in the hole” – i.e., the world’s largest gold reserves – to be unleashed “when necessary.”  However, as I have pounded the table about for months, the last thing China’s government wants is to shock the global monetary system with such an historic announcement – as frankly, the immediate shock waves would be so powerful, they would negatively impact China as powerfully as the rest of the world.

In the meantime, there is a very real potential that China’s supposed $3.6 trillion of currency reserves could be drained by futile efforts to support its collapsing stock market, Yuan, and shadow bank financed municipalities and “quasi-public” corporations.  To wit, the sheer lunacy of overtly putting hundreds of billions of funds into supporting an historic stock bubble – just eight years after similar efforts failed, amidst far more favorable economic conditions – is a sight of epic incompetency to behold.  Let alone, attacking speculators, bloggers, and anyone else deemed to be enemies of the “national team” charged with supporting China’s historically overvalued financial assets.

However, taking the cake in the category of Keystone Kops financial planning is the fact that – as exemplified by last night’s announcement of massive reserve requirements for those attempting to trade the Yuan “non-deliverable forward” market – the Chinese are wasting countless hundreds of billions supporting the Yuan, whilst at the same time devaluing it!

No, I’m not crazy – and actually, I’ve been writing of this since the initial Yuan devaluation three weeks ago; which, I might add, I not only predicted that very morning, but four months earlier.  Which is, that whilst the initial devaluation was a modest 6%, the Chinese government clearly aims to de-peg the Yuan entirely – in what will be an equally “cataclysmic financial big bang to end all big bangs.”  As with the disclosure of its massive gold holdings – which they are now doing monthly, in very small increments – it doesn’t take a rocket scientist to see the PBOC’ wants to gradually weaken the Yuan, as opposed to doing so at one fell swoop – and thus, causing a globally destructive monetary shock wave.

However, what they want and what the markets force upon them are two entirely different things.  And thus, comically, we are now seeing such immense selling pressure on the non-deliverable forward (NDF) Yuan market, that the PBOC is not only actively supporting it with additional public funds; but, as mentioned above, “cracking down” on sellers with the same, tired manipulative tactics initially mastered by the U.S. CFTC and SEC.  In the big picture, historians and common civilians alike will laugh hysterically at the concept of the PBOC flushing state-owned funds down the toilet, in attempting to “support” an asset they are, by policy, devaluing.  But then again, we are talking about the Chinese government; i.e., the “most dangerous, destabilizing force on Earth.”

Again, I’m not sure what more needs to be observed – or overtly stated – as to how dire, and unstable, the global economic and financial situation has become.  Let alone, the increasing sparks of social, political, and geopolitical unrest arising from the irreversible – or even “delayable” collapse of history’s largest fiat Ponzi scheme.  To that end, if you don’t act NOW to protect yourself from its full wrath and fury – which likely, will be upon us shortly, you may permanently lose the ability to do so.