The Most Important Reason to Own Precious Metals – Revisited

Just four months ago, we penned “The Most Important Reason to Own Precious Metals,” i.e. enabling your net worth to keep up with the inexorably rising cost of living over long periods of time.  Specifically we referred to food prices; i.e., the indisputably most important “item of real value.”  Care of unfettered global money printing – particularly since the 2008 financial crisis – the price of all items we “need versus want” are relentlessly rising; and of them, none characterizes “need” better than food.

Back then we highlighted the startling percentages of U.S. produce grown in California where an historic drought is ongoing.  However, we’ve since realized that an equally devastating drought is occurring in Brazil; and as you can see below, the entire world could be catastrophically impacted.  To wit, there’s a reason mass social unrest pervades Brazil during what should be the nation’s proudest moment, i.e. hosting the World Cup.  And that reason is persistently high food prices. 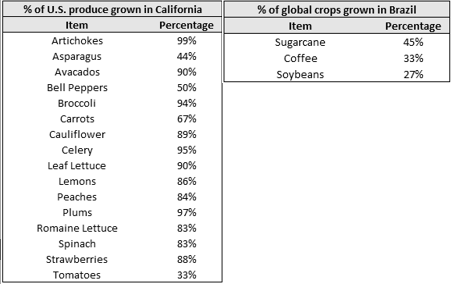 When we wrote that article in mid-February, the BLS’ U.S. Foodstuffs Index sat at 377.  But take a look at what it’s done since – rising a whopping 17% to 440 as the prices of beef, pork, chicken, eggs, shrimp and milk, among others have surged to all-time highs.  And keep in mind, this is just the United States where the dollar’s (soon-to-be-lost) “reserve currency” status has enabled price inflation to be relatively moderate. 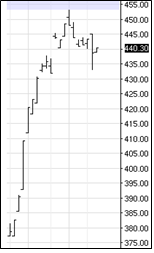 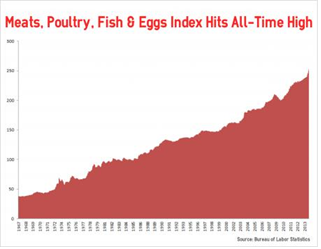 As you will see in this article, the long-term global food price trend – irrespective of monetary inflation – is straight up.  And thus, how anyone can resist “portfolio insurance” with history’s only proven inflation protection – physical gold and silver – is beyond us.

It’s Wednesday morning, just hours before another FOMC propaganda statement.  Frankly our advice is to ignore Whirlybird Janet entirely as the Fed’s job is to lie about everything from employment to inflation to their own policy actions, whilst its “traders” work with the PPT, ESF and gold Cartel to manage investor “expectations.”  To wit, yesterday’s “mystery surge” in the 10-year Treasury yield to a more “comfortable” 2.65% from the 2.60% line in the sand we have written incessantly about; not to mention, the prototypical “dead ringer” algorithm on the “Dow Jones Propaganda Average” and DLITG or “Don’t Let it Turn Green” algorithm capping gold.  This morning, the litany of global “horrible headlines” is as violently PM-positive and equity negative as one could imagine; and when the history books are written, readers will be amazed at how TPTB were able to maintain “orderly markets” this long.

We want to return to today’s extremely important topic as soon as possible, but would be remiss if we ignored said “horrible headlines” given how potentially cataclysmic their sum total could be.  First off, to the “Eastern Front” where as predicted the “domino effect” of Russia cutting off Ukraine’s gas supply is already being felt.  Just one day later, gas prices as far away as the UK are 8% higher, as Ukrainian pipeline operators “pass through” their troubles to Europe.  And thus, we again remind you that nearly a third of all European gas is imported from Russia, half of which arrives via Ukrainian pipelines.  So for those that believe Germany and the other European powers will “back” Obama and Kerry in their crusade to re-start the Cold War, we say think again.

Meanwhile, the Middle East crisis threatens to explode at any minute, with the U.S. actively discussing an Iranian “alliance” to quell ISIS’s plans to take over Iraq and an escalating war of words between Iraq and another tenuous U.S. “ally” – Saudi Arabia.  There’s nothing like verbal, and very likely physical violence amongst the largest oil exporters to promote stability; particularly when the correlation between rising crude prices and plunging economic activity is essentially 100%.  Not to mention, perhaps the most unbelievable news of all; i.e., the U.S. is again antagonizing Syria with John Kerry claiming “raw data indicates recent use of chemical weapons by the Syrian government.”  I mean is there anyone we don’t want to start a war with?

And finally, here in the United States of Economic Collapse, two data points that – in freely-traded markets – would have had precious metals soaring.  That is an explosion in the current account deficit from $81 billion in 4Q13 to $111 billion in 1Q14, atop a 9% plunge in mortgage purchase applications last week, and a 13% implosion in refinance applications – amidst an environment of plummeting interest rates!

OK enough of such “trivialities;” as hey, as long as the stock market is higher – and precious metals lower – all’s well, right?  That is unless you’re a real person with no job or savings but a persistent need to eat.  You want to talk bubble, well how about this one of how the PPT-supported S&P 500 hasn’t even budged compared to the growth in food stamps; which, what do you know took off in earnest in 1971 – “coincidentally,” when the gold standard was abandoned.

Anyhow, what prompted us to revisit our February 2014 article – not to mention our July 2013 article, “Population Growth Supersedes All” – was this shocking article describing monstrous Chinese food demand which will only rise exponentially in the coming decades.  I could throw in my shock at having paid more than $4.00 for a gallon of chocolate milk yesterday – including millions of Americans, where homelessness has blown through record levels essentially everywhere.  In the article, Sovereign Man discusses how annual Chinese grain imports require farmland the size of California with projected import growth each year necessitating incremental farmland the size of the Netherlands.

Think about this carefully, and put on your “analyst cap” when doing so.  Food prices are already at or near record levels in both nominal and real terms; and again, for “emerging market” nations whose currencies have been decimated by inflation exported by the “reserve currency,” the impact on the chart below has been far more pronounced.

Chinese grain import demand alone will require a land mass equal to the U.S. Western seaboard within 15 years; and again, that’s just one crop for one country.  Beef by the way, is far more expensive to “farm” than grains; and care of soaring feed costs and an historic Texas drought, U.S. cattle inventories have plunged to 63-year lows.  The U.S. is the world’s fourth largest beef exporter; so again, the entire world will likely be affected. 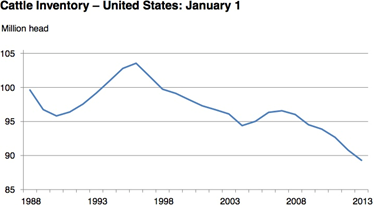 And finally, we feel the need to tie in the “giant pink elephant” in the room; i.e. the massive debts a desperately hungry world have racked up since the aforementioned abandonment of the gold standard in 1971.  Below is just America’s federal, municipal, corporate and individual “on balance sheet” debt of $60 trillion growing exponentially since the economy peaked at the turn of the century at a significantly steeper curve since the 2008 financial crisis. 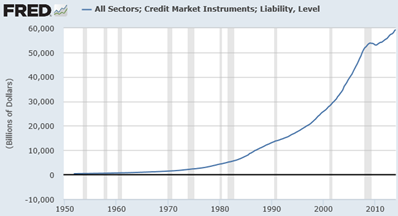 Such debt growth is similar worldwide; and with each passing day, its slope will only grow steeper.  So remember when the Fed blathers about “tapering,” “recovery” and other assorted propaganda, keep in mind the above charts – and subsequently, decide if you think they can allow interest rates to rise or for that matter, whether a Cartel of bank buffoons can offset exploding gold and silver demand in light of the “most important reason to own precious metals.”