The Myth of “QE to Infinity”

First, a “full court press” on the Cartel – as I will NOT allow them to get away with what they have pulled the past week, without it being properly called out.  In my view, 14 years of such documentation – from myself, GATA, and others – has unquestionably enabled the TRUTH to be circulated to “big” and “small money” alike; and thus, accelerated the inevitable end game of freely traded markets.  Plus, it empowers readers the world round, to see through the lies, and act to protect themselves.

That said, keep in mind that today is one of the biggest “key attack events” ever, given the duel Cartel threats of today’s COMEX options expiration – undoubtedly, countless $17/oz silver call options are open; and tomorrow’s potential “day of Central bank infamy,” as first the Fed, and then the Bank of Japan, issue updated policy statements.  Which is why it shouldn’t surprise anyone that the PPT’s “pre-FOMC drift” algorithms were executed the second New York’s “pre-market” opened – as by now, any financial professional with a pulse realizes roughly half of all S&P 500 gains of the past decade-plus have occurred the day before Fed meetings.  Conversely, here’s what the Cartel did at the usual “2:15 AM” time stamp – which I’ve paired with what they did at 2:15 AM on June 14th, 2013; i.e., the first of the 720 trading days since I started tracking such activity – of which 628, or 87%, have depicted a nearly identical pattern.

FYI, here’s what has happened to COMEX registered gold inventories during these three years of manipulative infamy – setting up what inevitably will be the biggest physical short squeeze in commodity history. 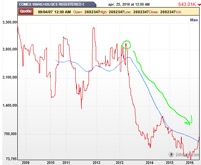 Nothing I have seen has been as transparent, and heavy-handed, as the past week’s Cartel efforts to slow the silver rocket, and cap gold at their nearly three-month “line in the sand” of $1,250/oz.  And before I show you the following charts, please take a look at what I wrote Friday and Monday – in which, I posted charts of the last week’s gold, silver, and stock “trading,” which make the above gold comparison pale in comparison, in terms of how blatant such actions have been.

First, here’s yesterday’s silver “trading,” in an environment of much weaker than expected economic data (when isn’t it?); juxtaposed against what I showed yesterday – of what the Cartel did on Thursday, when silver attempted to surge past $17.50/oz.

Next, yet another “dead ringer” for the “Dow Jones Propaganda Average,” whilst all other major global stock averages declined.  And finally, the prototypical gold “up day” – starting with a “2:15 AM” smash; capped at the 10:00 AM close of physical gold trading (i.e., “key attack time #1); and ending with the usual end of day “walk down,” whilst the Dow is “Hail Mary’d” to its highs.

This morning, the Cartel is so scared of a “COMEX opex” close (at 1:30 PM EST) above $17/oz; let alone, a day ahead of what will likely be mega-dovish Fed and BOJ policy statements; they did this just before the COMEX open, with no other market budging.

That said, prices for both gold and silver are rallying sharply into the New York open – with silver again above $17; following an abysmal durable goods miss, portraying the 14th straight monthly decline -which has not occurred outside recession (LOL) in…wait for it…60 years!  Gee, I can’t wait to see what statistical fabrications the BLS comes up with on Thursday, to avoid a negative print for first quarter GDP growth.  This is getting very, very interesting.

And now, on a day where the only other economic news is a major UK pension fund slashing benefits – get ready for this to occur everywhere; the potentially imminent sovereign default of the Malaysian government; and the pathetic “anti-Trump” coalition failing within hours (heck, I just might vote for him, to silence these morons), let’s get on to one of the most important, violently “PM-bullish, everything-else-bearish” concepts I’ve discussed yet.  Which is, the myth that stock and bond markets can be supported indefinitely – let alone, in real terms – by “QE to Infinity.”

It started with the Fed being forced to “taper” QE after having “monetized” more than a third of all Treasury bonds – particularly the most market-sensitive ones, at the long end of the yield curve; and more than half of all mortgage-backed bonds.  In other words, irrespective of whether the Fed felt the need to monetize bonds, they were running out of supply to do so – even as government debt issuance has surged to record levels.  As not only did the Fed’s unwieldy $4.5 trillion balance sheet put its own credibility – and solvency – into question, but it has caused dramatic ramifications in the rapidly “de-liquefying” repo market.  In other words, the amount of good collateral for banks to base loan activity has dried up – in other words, the polar opposite effect of the “liquidity injection” QE is targeted to accomplish.

Next, the same thing occurred in Japan; and most recently, in Europe; where the ECB is now resorting to monetizing corporate bonds, given that they are running out of sovereign bonds – and causing nearly the entire continent’s sovereign bond market to trade at economy-killing negative yields.  So yes, while the “zero bound” has clearly not proven to be the “QE end game” – at least, not yet – a lack of monetizable supply certainly is.  So unless Central banks can find a way to increase debt loads exponentially, at increasingly negative interest rates, it will soon become impossible to continue QE.  Let alone, as the currencies such bonds are being issued in are crashing; and confidence in the issuing governments and monetizing Central banks is destroyed.

That said, what is going on Japan as we speak – which may well be “pushed over the edge” by tomorrow night’s potentially market-shattering policy statement – takes “end game” to a whole new level.  Not that I haven’t spoken of this before, as I did in last week’s Audioblog – of how Japanese equity monetization is putting the “Land of the Setting Sun” on the verge of total economic implosion.

“Japan’s overt equity monetization scheme – which since announced four years ago, has failed to accomplish much more than a levitation at levels more than 50% below the high of 27 years ago – has caused the BOJ to know own well above 50% of the Nikkei Exchange’s ETFs, to the point that either all of its stocks will need to be packaged into ETFs; or the BOJ will literally start to be the majority owner of countless hundreds of public companies.  Which as you can imagine, poses a whole new set of ‘unintended consequence’ problems – like, for instance, turning Japan’s covert fascism into overt communism.”

Well, guess what?  Not one week later, this shocking news item emerged, of how the Bank of Japan is now a top 10 holder of roughly 90% of Japanese stocks.  In other words, the Japanese government is on the verge of owning the corporate sector.  And again, the expectation for tomorrow’s BOJ policy statement is that they may double their pace of equity monetization – despite having literally run out of ETFs to buy.  In other words, Japan is about to turn COMMUNIST – just as its debt explodes to unprecedented levels, and its unparalleled “demographic hell” kicks in – unaided, I might add, by the Fukishima nuclear fallout that has caused birth rates to plunge further.

In other words, my long-time prediction that Japan will become the first “first world” nation to experience 21st Century hyperinflation is coming closer and closer to reality.  And sadly, Japan’s experience is simply the “template” of what will occur throughout the rest of the “first world” – as history’s largest, most destructive fiat Ponzi scheme implodes in the coming months and years.  Got gold and silver?