For the past week, my “spider senses” have been tingling – as something tells me the window to own the “world’s cheapest asset” may shortly be closing.  No, this is not a “market timing” call.  To the contrary, given the 100% rigged nature of today’s financial “markets,” traditional tools have limited short-term usefulness; and thus, we simply focus on the long-term nature of our investment thesis.  That said the most important aspect of said thesis is that in fact, precious metals are not “investments” but savings.  It matters not when you buy them, so long as you store significant amounts of your net worth in them.  Unless alchemy somehow becomes feasible or an alternate currency emerges possessing all the key definitional parameters of money, physical gold and silver will NEVER be usurped of their time honored monetary roles.

In the case of silver specifically its unique tripartite role as the world’s most indispensable industrial metal, timeless wealth preserver and universal medium of exchange makes it one of the most valuable substances ever known.  Unlike gold, nearly all above ground silver has been consumed by industry, to the point that total inventories are no more than two billion ounces – the majority of which sits in private safes never to see the light of day.  Moreover, in recent decades, emerging technology has made it the second most widely used commodity in the world trailing only crude oil in number of applications.  There’s a reason the U.S. Geological Service claimed in 2010 that silver will be the first “extinct” element on the periodic table; and in our view, once the global fiat Ponzi scheme goes into its final death throes said “extinction” will shift from inevitable to imminent.  Jim Sinclair believes this historic economic inflection point will commence this fall; and whether he is correct or not, that time is coming – and soon.

For years we have written of our firm belief the gold/silver ratio must revert to at least its historic ratio of 15:1, and potentially significantly lower for reasons detailed in countless articles such as August 2013’s “Silver Prices Way Below The Cost Of Production” and last month’s “Silver Prices At Historic Disparity With Fundamental Reality.” You know “little things” like surging global demand and plunging supply. 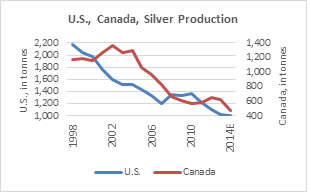 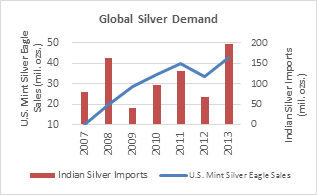 The gold/silver ratio fell as low as 32 in April 2011 – before the Cartel’s “Sunday night paper silver massacre” was executed in a “no offer” environment; when for the second time in three years, global physical silver supply completely dried up. 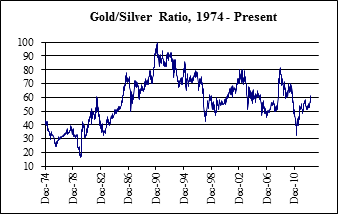 In our view, it’s just a matter of time before TPTB lose control over this, the “Achilles Heel” of the global financial system – as silver’s supply/demand balance has never been tighter nor its fundamental, technical and sentimental fundamentals more bullish.  Frankly, we don’t think the case for silver has been more compelling in our lifetimes; and certainly, not since the late 2008 “low” – when physical silver supplies ran out amidst blatant Cartel paper raids, yielding physical premiums of nearly 100% and multi-month delivery delays.

This morning, the key “story” – outside a brutal Japanese Tankan sentiment survey, increased U.S. troop deployments in Iraq, and the end of the Ukrainian “cease-fire” – cumulatively, pushing the dollar index below the key 80 level – is the Cartel’s unceasing attempt to quell the burgeoning PM re-emergence.  Oh, did I mention the biggest news of all?  The anticipated reduction – perhaps, by a significant amount – of India’s gold and silver import duties to be announced in the July 10th budget statement?

To wit, after yesterday’s “unexpected” PM surge – “coincidentally,” the second the COMEX’ first delivery day period concluded at 1:30 PM EST – the Cartel has made it blatantly obvious that their new “line in the sand” has been raised from $1,320/oz. to $1,330/oz.  Simultaneously, they are quite obviously “clinging for dear life” at $21/oz. silver, just above the “battlefield $20 silver” level they have fought tooth and nail for the past six years (whilst production costs have risen by 30%-50%).  I mean, can you imagine how gold can be the best performing asset class of 2014?; yet, despite being up every day the past week has been hit every day at the “2:15 AM” open of the thinly-traded London paper markets?

In fact, today’s “news” strongly validated that last week’s powerful breakouts – pushing gold and silver well above their respective 200-day moving averages of $1,287/oz. and $20.41/oz., respectively, may have some serious legs.  Not to mention, confirming exactly what we wrote in last week’s “Beach Ball At Record Depths” – in which per the below damning chart, we are simply baffled as to how Wall Street is projecting 2Q GDP growth of 3.5% when all relevant real data screams flat, flat, flat!  To wit, today’s “ISM” and “PMI” diffusion indices were in the mid-50s (as expected), supposedly suggesting economic “growth.”  However, the only real data released was construction spending – which came in at a whopping +0.1%, below the +0.2% estimate.  In other words, not a shred of real growth to be seen putting yet another chink in TPTB’s dying “recovery” propaganda scheme – which we assure you, must inevitably be addressed by Whirlybird Janet Yellen likely, sooner rather than later. 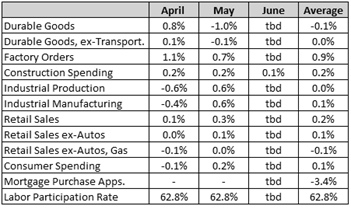 In the aftermath of said data, the Cartel is doing everything it can to protect its gold “line in the sand” at $1,330/oz.; but increasingly so, it is looking as if $20/oz. silver is on the verge of moving from a long-term ceiling to a permanent floor.  The biggest test of all will be on Thursday morning when the BLS propaganda team has the unenviable task of trying to create 210,000 jobs that don’t exist, whilst preventing the entire world from permanently losing faith in fraudulent U.S. economic data.  As we continue to trumpet each day, it’s just a matter of time before the “propaganda leg” of TPTB’s perception altering toolbox dies, leaving only the transparency of money printing and market manipulation that inevitably yields hyperinflation.

On that note, we penned “charts even we can appreciate” on January 2nd, with gold and silver trading at $1,220/oz. and $20/oz., respectively.  Again, we cannot emphasize more how short-term charts have become meaningless in today’s rigged markets.  However, even we can’t ignore charts going back to the abandonment of the gold standard 43 years ago – depicting dramatically oversold technical conditions, which recently turned upward amidst the most bullish fundamentals imaginable.  Such charts depicted the MACD or Moving Average Convergence/Divergence variable; which today, were validated by these charts depicting both metals on the verge of making long-term “golden crosses” – i.e., 50 month moving averages crossing above 200 month moving averages.  The last time this occurred – for both metals – was at the bottom in 2009; and thus, even we are hard pressed to ignore such action.

Given the enormous “commercial” naked shorting we wrote of yesterday – particularly after last Thursday’s post-FOMC PM surge – commentators like James Turk are writing of the potential for a near-term commercial “short squeeze.”  We are as always skeptical of anything occurring on the fraudulent COMEX including the data it publishes.  However, as Bill Holter wrote this morning it is quite eerie seeing silver open interest near record levels – as following last week, the only time open interest has been this high was in early 2008, just before Financial Meltdown I commenced.  As silver prices were rising in early 2008 – as opposed to this year’s tight trading range – the majority of the 2008 open interest increase was due to speculative buying.  However, three weeks ago, “large speculators” were net flat; and today, hold a net long position less than half that of early 2008.  In other words, it would be difficult to make a case that “speculation” is behind the recent open interest surge; but to the contrary, enormous Cartel naked shorting. 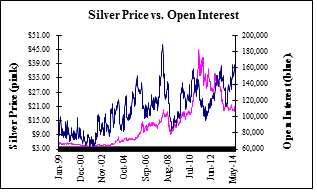 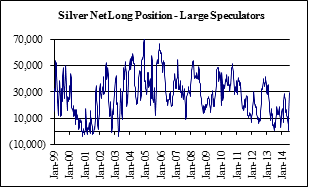 Only you can decide if what we’re writing is important to your personal due diligence process.  However, that is the beauty of the Miles Franklin Blog; as between David Schectman, Bill Holter, and myself you’ll receive multiple fundamental, technical and sentimental angles to analyze.  Our goal is simply to assist in this process; and ultimately, help you understand that the only way to guarantee the preservation of purchasing power over time is with the time-honored value of physical gold and silver.

Whether or not the “world’s cheapest asset” breaks its Cartel shackles now – as Jim Sinclair and others anticipate – or sometime slightly later on is immaterial.  At current prices – and retail availability – you may never get another chance to protect yourself as is the case today.  And in the particular case of silver, it’s a fait accompli its “ultimate quadruple top breakout” inevitably occurs; and when it does, not only will the artificially created “gold/silver” ratio return to historic levels, but at absolute levels most of us cannot comprehend.

As always, we encourage you to call Miles Franklin at 800-822-8080 – where our extremely experienced team will answer any and all questions you may have.  Not to mention, you can always email me at [email protected].