Each day, I alert you of all information relevant to your personal due diligence process.  At the Miles Franklin Blog, our goal is to optimize your ability to make intelligent financial decisions and cumulatively, David Schectman, Bill Holter and I put in no less than 30 hours per week doing so.  Such efforts are undertaken for free which is why we humbly ask, if you decide to buy, sell, or store Precious Metals, to “give us a chance” to earn your business.

Remember not only are we providing a valuable service for no charge, but have 25 years of experience in a very difficult unregulated business – where only the strongest survive.  In the aforementioned world of lies, honesty is still the best policy; and no place has this been more obvious than the Precious Metals industry where the past trying year has exposed quite a bit of dishonesty to put it mildly.  Conversely, Miles Franklin is as strong as ever and has never had a registered complaint in its entire history.  With brokers averaging 19 years of experience, we assure you, you’ll get the best service available.  Not to mention, we believe our Brink’s storage program – in Montreal, Canada is the finest in the Western Hemisphere; which is why I, as well as Andy Schectman and David Schectman hold substantial portions of our personal holdings there.

Long time readers know I pour my heart and soul into my work as I have for my entire 25-year career.  However, the mental energy expended in this particular work exceeds anything I have experienced as speaking truth in a world of exponentially increasing lies allegorically reminds me of Sisyphus pushing the rock up the hill.  Fighting an ever-rising tide of money printing, market manipulation and propaganda is exhausting work but never have I felt so spiritually rewarded.  Fortunately, our cause is not only just, but infallible; as never before has a fiat currency survived in 599 tries – let alone, on a global scale.  And now that worldwide debt growth has transitioned from mere geometric rates to borderline parabolic, it’s obvious we are in the terminal phase of the most maniacal, catastrophic monetary experiment of all-time.

There’s a slew of worldwide “horrible headlines” to address this morning; but for once, I’m going to focus on a single topic.  And that is, the oncoming end of Central banks’ ability to preserve the status quo by manipulating perception.  To wit, we have long written of the “diminishing returns” of money printing and now, they have become decidedly negative.  The list of unfavorable outcomes is mounting exponentially – be they inflation, underemployment, wealth inequality, social unrest, or draconian government; and conversely, the only remaining “positives” are bubble-like financial markets that benefit a rapidly shrinking “1%,” at the expense of the rest.  Frankly, the term “Bizarro World” doesn’t do justice to otherworldly charts like the below, depicting the utter collapse of the world’s 13th largest economy whilst its sovereign debt yields fall to multi-decade lows.  Note the inflection point in July 2012, when Draghi promised to do “whatever it takes” to save the Euro; i.e., print as much money as is necessary to prop up sovereign bonds.  To that end, the Fed undertook the same “oath” when it commenced QE3 in December 2012 – and in turn, the Bank of Japan when it launched “Abenomics” in April 2013.  Each of these “big three” economies has badly weakened since – irrespective of fudged and/or misleading data such as this morning’s comical NFP report.  And shortly, no amount of accounting and/or market chicanery will be able to hide it.  Is it in the East, or West, the entire world will soon realize there is no way the current monetary system can be saved?  In other words, it mathematically must die and from the ashes, a new system based on real money will arise and thrive, as has been the case throughout history.

Which brings me to this morning’s fateful NFP employment report, which yesterday I virtually guaranteed would be “better than expected”…

April is a big “phantom job month”; with tomorrow’s NFP report having tailwinds from last April’s 236,000 job “seasonal adjustment”; and, of course, the fact that the benchmark 10-year Treasury yield has fallen sufficiently far from the Fed’s “line in the sand” at 3.0%.

In other words, with one of the year’s biggest positive “seasonal adjustments” – which somehow, is never offset by negative adjustments – and the 10-year yield sufficiently below 3.0%, the BLS would likely be given the “green light” to publish a “better than expected” number.  Of course, as is the case with every such “strong” employment report, its flaws – and frankly, lies – were immediately transparent, even to the most jaded government apologist.  To wit, the “headline number” of a 288,000 job gain indicated a strengthening labor market that is until you read the fine print, which, as always told an entirely different story.

To start, 234,000 of the supposed 288,000 new jobs emanated from said “birth-death” model.  In other words, completely unsubstantiated by data of any kind; but instead, a mere figment of the BLS’ algorithmic modeling system.  “Coincidentally,” the birth/death model was created 15 years ago – i.e., just as high-paying U.S. jobs started fleeing permanently to points East.  And oh yeah, as the U.S. economy was permanently peaking.  All told, this imaginary accounting gimmick has added a whopping 9.1 million jobs since 1999, or 53,000 per month.  And equally comical is the concept behind it i.e., that large portions of laid off workers immediately start their own businesses.  Not only is such an assumption ludicrous in an economy with soaring costs, regulations, and competition; but given the recessionary environment of the past six years, the idea that millions of unemployed workers – the large majority of which have no savings, generating the majority of their “income” from government entitlements – are spending significant capital on new business ventures is even more ridiculous particularly when it’s established fact that banks have not been lending.  And even if this were actually true, it is unlikely that more than a precious few would be generating earnings significant enough to materially impact the economy at large. 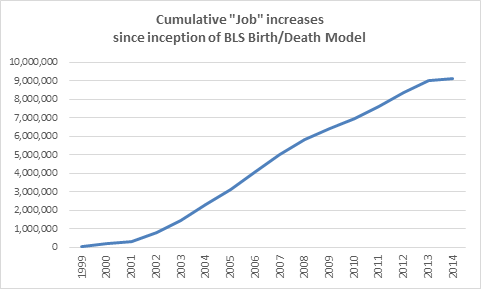 To wit, the government can report all the new jobs it wants; but even its own data proves said “jobs” are principally in the low paying – usually, minimum wage, with no benefits – temp help, fast food, and retail industries (which frankly, makes little if any sense given how poorly the latter two sectors are doing).  This is the same trend we have witnessed for years; and by the way, if one were to actually believe the huge job growth in April was due to better weather, than how come so few jobs were weather-dependent?  No, this report was entirely due to statistical manipulation, as the BLS has enough “tools” to create any headline number it wants.  Frankly, it weakened its credibility more this month than any I can remember given the lengthy list of “mitigating circumstances” proving it to be a sham; such as, for instance, the fact that while the “Establishment” survey underlying the NFP report indicated a 288,000 job gain, the simultaneous “Household” survey depicted a 73,000 job loss.  In other words, no matter how you slice it, the NFP report is and has been, a total sham – like essentially ALL government published economic data.

However, the biggest sham of all – or should I say, shame – is that the BLS finally reported an “unemployment rate” below the 6.5% previously cited by the Fed as its “threshold” for ending Zero Interest Rate Policy.  They have since rescinded that policy and it has been our belief that the only reason it was “held” above 6.5% was to prevent the Fed from looking foolish.  However, now that “Whirlybird Janet” has vowed to hold rates at zero indefinitely – i.e., at least six months following the end of QE, if and when that ever occurs – it was deemed acceptable to “release” some of the two-plus million people that lost their long-term unemployment benefits since December from the labor force.  Consequently, while 288,000 “jobs” were created in April – including 234,000 from the fictional birth/death model – a whopping 806,000 people left the labor force.  Essentially all will be added to the government entitlement payrolls and many will never work again.  After all, in a socialist nation, funded by money printing and excessive taxation, why work if you don’t have to?  This, of course, makes all sense in the world – until the very dollars being printed, taxed, and spent collapse in value.

Yes, the “unemployment rate” plunged in April according to the BLS – from 6.7% to a multi-year low of 6.3%.  However, the reason for such “good news” was entirely the collapsing Labor Participation Rate which fell to a new 35-year low.  As you can see by the second chart below, four million “birth-death” created jobs since the 2008 financial crisis have only enabled the absolute number of jobs to return to 2008 levels – of which, said “birth-death jobs” represent a whopping half of the total.  Moreover, the even more damning statistic is the red line – depicting how since 2008, 13 million people have left the Labor Force explaining why the “unemployment rate” is dropping so precipitously.  Actually, many of these people are in fact actively seeking work.  However, according to the statistical propaganda published by the government, once one’s long-term unemployment benefits expire – in some cases, after 115 weeks – they are no longer considered “workers.” 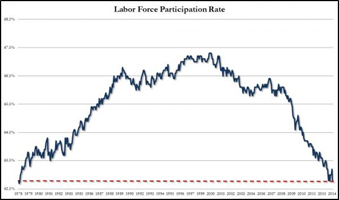 In advance of this number – not to mention, last week’s COMEX options expiration – the Cartel has attacked paper gold and silver with a vengeance even I have rarely seen; as discussed in yesterday’s article, “The True State of Precious Metals.”  Consequently, it’s no wonder gold has gone into backwardation six months out, and nearly a year out as well.  In other words, said attacks have substantially tightened the physical market, setting the stage for something to “give” sooner rather than later.

When the report was released, Cartel algos of course raided the metals again – whilst stocks held at their recent highs and Treasury yields surged.  However, lo and behold, as the fraudulent – at best – data was digested, rates plunged anew; and as I write just after 11:00 AM EST, the 10-year yield has fallen below 2.6%, breaking through a powerful “quintuple bottom,” likely en route to November’s lows below 2.5%.  So tell me, does this suggest a “recovering” economic, in which the Fed will “taper” its money printing – as if it ever did in the first place?  And since we all know our costs of living will only rise from here, this trend indicates even lower real rates – which in turn, will fuel dramatically increased physical gold and silver demand.

To wit, PMs ultimately overcame the Cartel’s best efforts of the past week – which frankly, are far less potent than in the past, now that gold and silver are trading substantially below their respective costs of production.  And what do you know, gold is again fighting to retake its current “line in the sand” at $1,300/oz.; which, when it does, will no doubt enable silver to win its own war at “battlefield $20” – en route to dramatically higher levels.